Rimouski, Friday. -- Thrilling experiences have been related by Salvation survivors of the Empress of Ireland disaster. Captain Wilson of Toronto, shared a cabin with Adjutant Green and Bandsman Johnston, who were saved, and Captain Dodd, of Toronto, who perished. Captain Wilson was awakened by the collision, but thought so little of the matter that he did not get up at first. Finding the ship listing, however, he rose with the others and went out, but owing to the slant of the decks they had difficulty in climbing to the rail. At last after they had noticed the odour of gas there came the roar of a terrible explosion, and Captain Wilson found himself thrown half stunned against the rail, which he grasped. He climbed over and found himself sitting with hundreds of other passengers on the ship's side, which as the vessel settled became almost horizontal.

A few moments later he was in the swirling water. He seized a piece of wreckage as he felt himself being sucked down, and he was under water for a seemingly interminable period. On coming to the surface he twice lost and regained hold of wreckage. The water was intensely cold but Captain Wilson managed to hold on until he was picked up by the second lifeboat which passed, the first being already overcrowded. He was given an oar, but was too benumbed to hold it, and be fainted. The next thing he remembered was being hauled into the Storstadt by a rope.

"When I was trying to reach the rail," related Captain Wilson, "a woman handed her five-year-old girl. I tried to lift the child so that Ensign Pugmire, who was clinging to the rail above me, could grasp it, but he could not reach it. I saw it was hopeless, so just before the plunge I handed the child back to its mother. I did not see them again."

Major Attwell, of Toronto, saved his wife and himself in one of the steamer's useless lifeboats. He found a life belt, and fastened it to his wife. He himself secured an air cushion, and with these the couple kept afloat, although they were sucked under three times when the ship foundered.

Captain Townsend, the officer in charge of the Salvation Army work in Quebec- City, will arrive here to-night to take charge of the bodies of the army victims. His wife was to have sailed by the Empress of Ireland, but was too ill to leave Quebec. 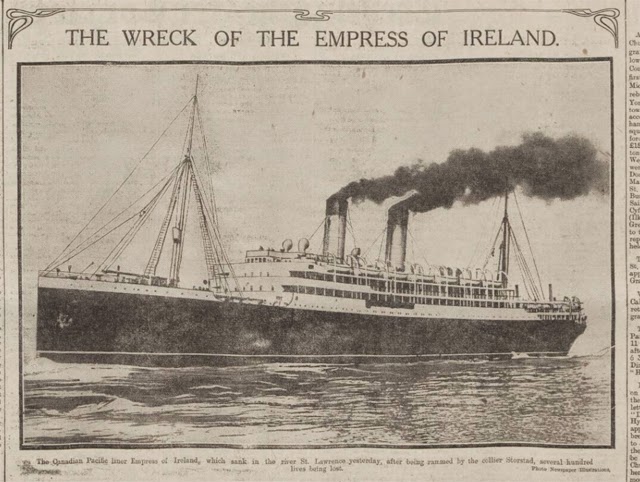 
News was received at the Salvation Army headquarters, London, on Saturday, that Capt. Pugmire is among the rescued. This raises the total number of Salvationists rescued to 22, out of about 160 on board, Commissioner M'Kie left London this morning for Liverpool, where he will join the Aquitania. He is proceeding to Canada to take up temporary command there. "We shall all bow our heads in subdued sorrow, but the Salvation Army must march on," said Brigadier Perry to-day.