I was working on some future updates for my web site when I came across this poem.  I liked it so much I thought I'd share it :)

A HOULDIN' FOR IVER.

Oh, there's nothing on earth like a shed of one's own
On a fiel' that's a body's for iver!
It's there ye have courage to "lay down yer bone"
And give thanks to tbe bountiful Giver.
I would rather be lord of a scraw-covered bay
Than be tenant at will of a castle;
And I'm happier here in this humble wee way
Than an emperor's wealthiest vasal.

Chorus:
For iver, for iver! my houldin's for iver,
As nate a wee spot as you'd see!
I envy no throne with a cot of my own
For Betty, the childher, and me!

Not a master to plaze, not a mortal to fear,
Not a want if we steadily labour;
But from autumn to autumn the height of good cheer
And a bite for a hungery neighbour.
I live in content like my daddies of yore,
No baillie to spy or to plunder;
And I drain it, and dig it, and dung it galore,
Till the craps are the counthery's wonder.

When driven in couple, like wethers or goats,
Poor cotters crowd in at elections,
The landlords may scare from the crathers their votes,
But conscience gives me my directions.
The clark's but a sarvant, the taicher's a slave
Doctors dodge, and the clargy palaver;
But I needn't knuckle to tyrant or knave
I'm lord of my acres for ever!

Chorus:
For iver, for iver! I houl' them for iver,
As purty wee fiel's as you'd see!
I envy no throne with a cot of my own
For Betty, the childher, and me!

Henry M'Donald Flecher
Posted by an extract of reflection at Saturday, September 25, 2010 No comments:

Email ThisBlogThis!Share to TwitterShare to FacebookShare to Pinterest
Labels: poetry

A Short History of the Presbyterian Churches of Ballymoney, County Antrim. 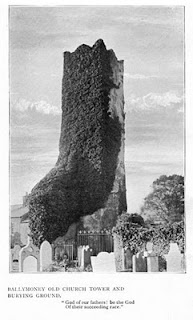 I've added the transcription of another short history to my website.

http://freepages.genealogy.rootsweb.ancestry.com/~econnolly/books.html
Posted by an extract of reflection at Thursday, September 09, 2010 No comments: