The Anglo-Norman Families of Lecale in the County of Down 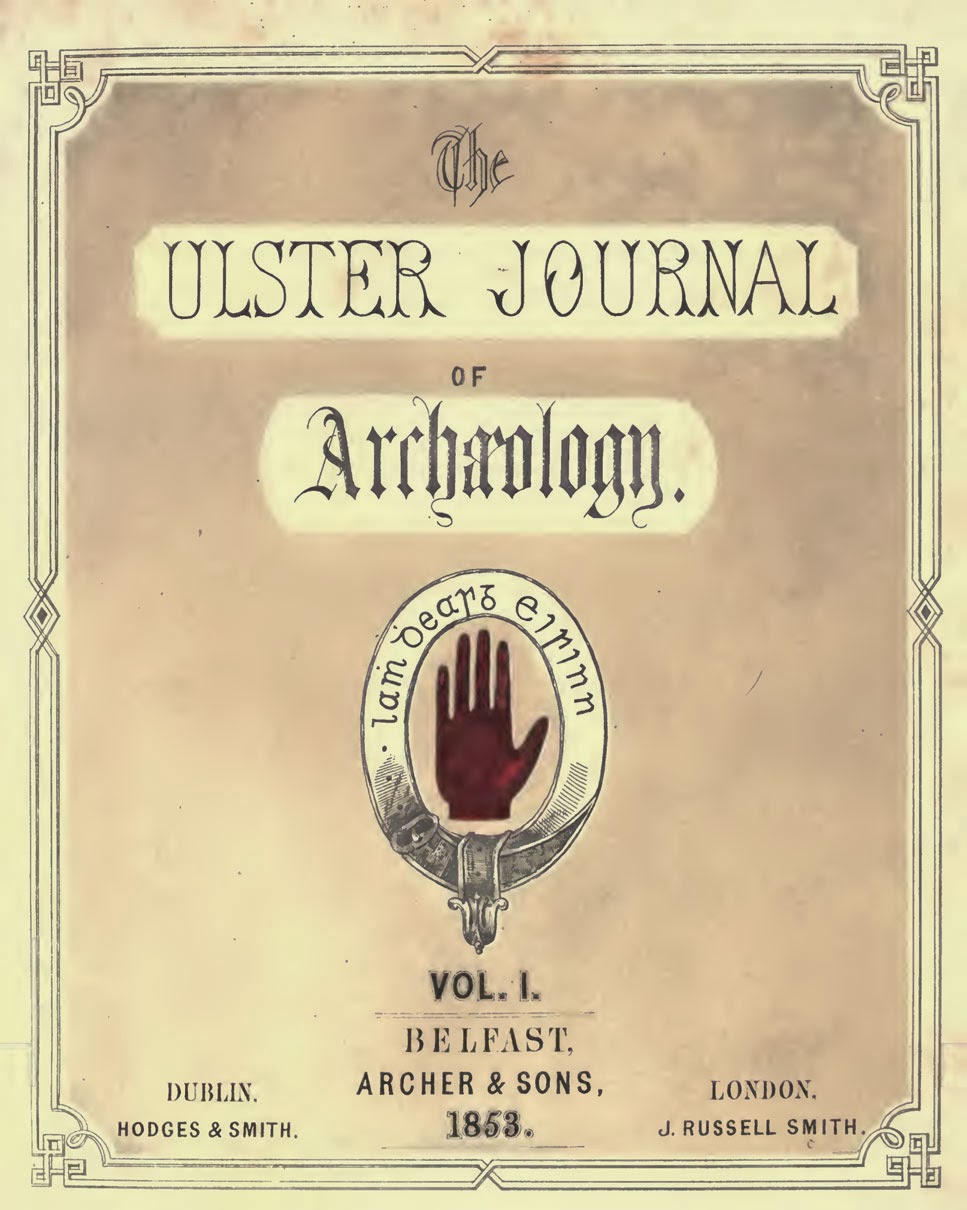 In the month of February, 1177, Sir John de Courcy accompanied by his brother-in-law Sir Armoric St Lawrence, Sir Roger le Poer, twenty-two knights and 300 foot soldiers, and many of the Irish, according to Lord Lyttleton, marched from Dublin to Ulster, reaching the city of Down on the fifth day, which he surprised, and, without resistance, captured and rifled. The Annals of the Four Masters, of Ulster, of Innisfallen, &c., record many battles as being fought between De Courcy and the Ulster Irish, principally with the chieftains of Ulidia, at that period held by the family of Mac Donslevy, originally called O'h-Eochadha. (O'Haughey.) Victory sometimes leaned to the native forces, but ultimately to the English, owing, in some degree, to their superior description of arms, and the almost impenetrable armour with which they were clad, (as stated by Hanmer,) as well as to De Courcy's own gigantic strength and indomitable courage, and the support which he received from the clergy, who were constrained by the Bulls of Popes Adrian and Alexander, and by the influence of the Cardinal Legate Vivian, then in Down. There can be little question but the number of De Courcy's troops has been vastly underrated; and that the success which he achieved attracted still greater numbers, who flocked to his standard, hoping to share in the spoils, "the cloathing, gold, silver, plate, and rich booties," which, Hanmer writes, the English obtained, "without checke or controulment of any," on their first victory in Down. Eventually, such was the progress of his arms, that he subjugated to the English crown the greater part of the maritime coasts of Ulster, from the Boyne to the Bann, with considerable portions of the interior, having his chief castle at Downpatrick in the territory of Lecale. But the Irish, though defeated, were not subdued; and to protect his conquest of Lecale, De Courcy found it necessary to erect a chain of upwards of 18 castles, (including the seven in Ardglass,) girdling the entire sea-coast and river of Lough Coyne from Dundrum to Ath-na-cleidhe (now Annacloy) on the Marches; with another at Clough to guard the mountain passes from Iveagh, and which stood in view of the greater fortress of Dundrum. This remarkable feature in the topography of this and the adjoining districts, could not fail to strike such a keen observer as Mrs. Hall, and we accordingly find her writing that "along the whole of its borders -- north, south, east, and west -- are the ruins of numerous castles. The character of the scenery, indeed, strongly reminded us of the 'Barony of Forth' in the county of Wexford; for everywhere we noted indications that a comparatively small number of strangers had been living in the midst of enemies, whom they had 'come to spoil,' and who were, consequently, compelled to keep 'watch and ward' at all seasons, in or about their 'strong houses of stone.'"

With portions of the lands thus conquered, De Courcy richly endowed many of the monastic houses; also amply rewarding such of his fellow-soldiers, as determined on abiding his fortune, with similar grants. Sir John Davies, in his "Discoverie of the True Causes why Ireland was never subdued, &c.," mentions the Audeleyes, Gernons, Clintons, and Russells, as among such "voluntaries;" -- whilst Harris, in his History of the County of Down, gives, in addition, the families of Savage, White, Riddel, Sandal, Poer, Chamberlane, Stokes, Mandeville, Jordan, Stanton, Passelew, Copland, and Martell; and adds, "perhaps the Fitz-simons, Crowleys, and Bensons." The "perhaps," of Harris is, however, perfectly gratuitous, as it is highly probable he extracted his list from the Act for the attainder of Shane O'Neill, passed in the 11th year of the reign of Queen Elizabeth; which, after enumerating the Queen's numerous historical titles to the realm of Ireland, mentions the conquest of Ulster, by John de Corsie, who "brought the people of the same in due subjection to the crown of England; and for his painefull service and worthy deedes, did hold and possesse the sayd countrey of Ulster quietly of the king of England's gift: of whose companions in armes there remaineth at this day in Ulster, as a testimonial of that conquest, certain stirpes of English bloud; as the Savages, Yordans, (Jordans), Fitz Simons, Chamberlins, Bensons, Russels, Audeleyes, Whites, and many others, as proprietors of large portions of land, hardly and valiantly hitherto kept by them, although with great peril and povertie." In a M.S. written about 1598, and printed in Dubourdieu's Antrim, it is also stated that De Courcy planted in Le Cahill sundry English gentlemen, "where some of their posterity yet remain. Their names are, Savages, Russels, Fitz-simmons, Audlies, Jordans, Bensons." In the list, subsequently given by Harris, of the principal gentlemen resident in Down in the time of Queen Elizabeth, (query, end of her reign?) of those decidedly of British origin he mentions only the families of Savage, Fitz-simmons, Dowdal, White, Benson, Russel, Jordan, Audley and Mandevill; omitting those who have been stated as followers of De Courcy, the Riddels, Sandals, Poers, Chamberlanes, Stokes, Stantons, Logans, Passelews, Coplands, Martins, and Crollys; though some of these, for instance the latter, were then possessed of ample possessions in Down, as also the Chamberlanes; for we find, by an Inquisition held at Downpatrick, 14th September, 1634, that so late as 1615, Roger Chamberline, of Mozellrath, in Louth, then granted to Francis Annesley, Baron of Mountnorris the estate of Cloghmaghercatt, (now the town of Clough,) in whose family it remained until 1783, when it was sold to the grandfather of the present proprietor, David S. Kerr, Esq.

Some of the above names, under their Norman forms, are to be found in the attestations to the monastic grants from De Courcy, to Down, Neddrum, &c., and in the grants from his followers, to Neddrum. Thus Adam Camerario we may presume to be the founder of the Chamberlanes, Roger de Dunseforth of the Jordans, Willielmo de Coupland of the Coplands, Radulfo Martel of the Martels, Simone Passelew of the family of that name, Walter de Loga of the Logans,a Will de Stokys of the Stokes; and we may fairly presume that Osberto T. Tussel, an attesting witness to the grant of Ballykinlar from De Courcy to Christ Church is a copyist's mistake for Russel.b It is very probable however, that the Riddels, Poers, Stantons, Passelews, and Martels, never resided in Down, though the map accompanying Connellan's translation of the Four Masters, places the Martels in Upper Castlereagh, and the Stantons and Le Poers in Lower Castlereagh; but nothing can be more incorrect than this map in the placing of most of the English and Irish families in Down, as we find the Russels placed in the south of Dufferin. which belonged to the Whites, instead of in Lecale; and the Fitz-simons in the Ardes, which belonged to the Savages; the Audleys in Lower Castlereagh, and the Jordans in Upper Castlereagh; though it will appear that all these families were located in Lecale. Harris, it will have been perceived, has the Mandevilles so late here as Elizabeth's reign: we have for this, however, no other evidence, and we think it highly probable that that family, as well as the Logans, and Stokes, had left Ulster shortly after the death of the "Red Earl."

Up to the time of Cromwell a continued intercourse and intermarriage of the old British families were kept up between the inhabitants of Lecale and of the County Louth; the communication between the districts being maintained, at an early period, according to Harris, by sea, "while the Irish possessed all the passes in the mountains between the two counties." This intercourse arose not alone from the sympathy of common origin and motives of mutual defence, but also from the fact, that many of those families held property in both places; such as the Dowdalls, Clintons, Whites, Chamberlines and Stokes, whom we find constantly appearing in the 'Inquisitions' as trustees for the Lecale families; and that, in the confusion consequent on the death of the "Red Earl," and the fierce wars of the O'Neills, many of these families parted with their lands in Lecale, and removed to Louth, Meath, and Dublin; thus accounting in some degree for their decay and disappearance out of Down. But many of them clung with desperate fidelity to the ancestral homes and fertile fields which their forefathers had won with their good broad-swords; and we believe we do not exaggerate when we state, that one half of the present population of Lecale is their direct posterity, the remaining moiety being of modern English, Scotch, and Irish descent. At first it seems difficult to account for so many of the descendants of the old Anglo-Norman settlers being located here, while they have disappeared from the rest of the County; but this apparent difficulty will vanish, when we recollect that a great portion, more than one half of this Barony, belonged to the Church, and that, prior to the suppression of the religious houses, from the reign of Henry the seventh the Fitzgeralds held, (with a short period of intermission,) the large estates of Ardglass and Strangford; -- that no forfeiture, of any importance, took place until the time of Cromwell; -- and that consequently, there being no sudden change of proprietors, there was no new plantation and expulsion of the old stock.

[a] There are many families of the name of Logan in Lecale as well as the rest of Down, but they are of Scotch origin. Walter Logan of Provestown, in the Ards, a Scotchman, 18 May. 11, James I, received a grant of denization to be free of the yoke of Scotland. The Wardlaws, also, who are supposed to be of English descent, are Scotch. William Wardlow, of Lismullen, now Bishops Court, received alike grant in 1614.

[b] Lodge vol. vi. p. 140, under Lord Kingsale, writes that, in 1196, De Courcy took a garrison-castle at Killsandall, where he placed one Russel, who, making an incursion into Tyrconnel, was killed in his return with a great booty, with many of his men, by Flachertach O'Molldory, king of Tyrconnel, -- The Four Masters, under the date 1197 call this castle "Kill Sanetan," and state it as being built by De Courcy and the English of Ulidia, on which they left Roitsel or Rotsel Pitun in command, and, though they mention his defeat, say nothing of his being killed. It is very possible the mames were identical, the affix Pitun being subsequently abandoned. The castle of Killsandall was on the east side of the river Bann, near Coleraine: its foundations are still visible. -- See O'Donovan, Four Masters; -- Reeves, Eccl. Antiquities. p.p. 74-324, -- and Primate Colton's Visitation, pp. 29-31.

Posted by an extract of reflection at Thursday, June 05, 2014