Is Chocolate as Healthy as Fruit? 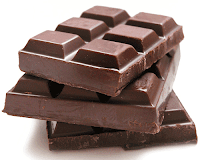 The good news (according to Yahoo News) is that - Yes! - chocolate can be just as healthy as fruit.  The report repeats claims I've heard before and says:

"When tested and compared to juices from ‘superfruits’ such as blueberries and pomegranate, dark chocolate was found to be higher in antioxidants, which are essential for fighting disease and preventing wrinkles. For a healthy treat, it is best to go for a pure dark chocolate as milk, sugar and too much processing can reduce these health benefits."

The bad news though is that world chocolate supplies are set to run out!

"It is one of the most popular treats worldwide, so it may come as bad news to many that world chocolate supplies may soon run out. Due to political unrest and dangers to farmers in the Ivory Coast (where a large proportion of the world’s cocoa beans are grown), many fair trade cocoa farmers and trainers have fled the country and chocolate production has hit a low. It has been predicted that supplies of sustainable chocolate are set to run out, and a chocolate drought has been predicted for 2014."

If its true that there will be a "chocolate drought" then we can expect the price of the tea-time chocolate biscuit to become far more expensive.

Why is it when they say something is good for you the price goes up?
Posted by an extract of reflection at Wednesday, March 14, 2012

Email ThisBlogThis!Share to TwitterShare to FacebookShare to Pinterest
Labels: news