Empress of Ireland Disaster - The Storstad

EMPHATIC STATEMENTS ON BEHALF OF THE STORSTAD 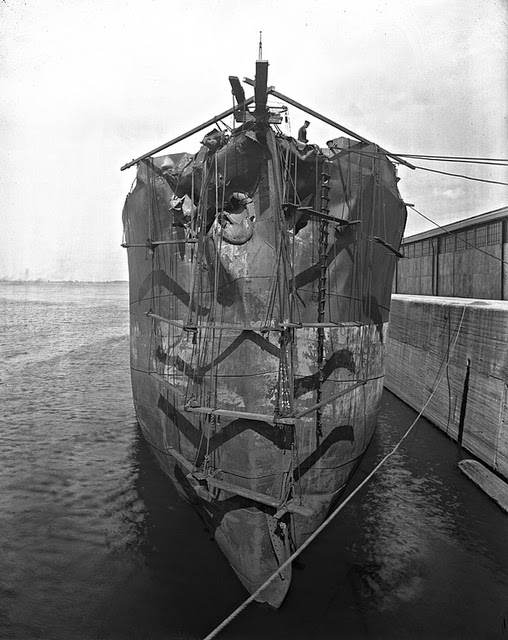 Montreal, Monday. -- The Storstad has arrived here. The collier appears to have been comparatively slightly damaged by her collision with the Empress of Ireland. Immediately upon the vessel's arrival she was seized, by the Sheriff, acting under a writ which has been granted to the Canadian Pacific Railway Company, who have presented in the Quebec Admiralty Court a claim for two Million dollars damages against the Storstad's owners. Captain Anderson has not yet broken the rule of silence which he has imposed upon himself since the disaster occurred, and the members of his crew have been almost equally taciturn.

From the guarded statements which have been made to the inquiry of Pressmen, however, it is gathered that Captain Anderson was not on duty at the time of the collision, and that the Storstad had been ordered astern before she struck the Empress.

When the writ was nailed to the Storstad's mast, Captain Anderson demanded, "By what authority do you board my vessel and place it under arrest?" The Deputy Sheriff replied that his authority was the authority of the British Empire.

Captain Anderson had a conference, with Mr. Lange, chief representative in America of the Maritime Steamship Co., and it was semi-officially stated afterwards that the captain had reported that the Storstad did not back away from the Empress of Ireland after the collision. On the contrary, the collier steamed ahead, making every effort to keep her bows in the hole dug in the side of the Liner. It was the liner which backed, according to Captain Anderson's version, and so doing the Empress of Ireland bent the Storstad's bow in an acute angle towards her port beam. Then the liner became hidden from the sight of the Storstad, and, despite the blowing of his whistles, Captain Anderson was unable to locate the stricken ship until the cries of the victims were heard.

Captain Anderson denies that the Storstad was a mile away from the liner after the collision. He declares that the collier did not move, but that, on the contrary, the Empress of Ireland changed her position. -- Central News.

Montreal, Monday. -- A statement issued on behalf of the captain of the Storstad was read by Mr. J. W. Griffin, of New York, representing the owners. Questioned afterwards Mr. Griffin said that Captain Andersen said he heard Captain Kendall shout through the megaphone, "Don't go astern." Captain Anderson replied, "I won't. I am going ahead" Mr. Griffin said if there had been any real way on the Storstad she would have sheered through the Empress like paper.


Montreal, Monday (Later). -- Captain Lange, the agent of the Maritime Steamship Company of Norway, the owners of the Storstad, issued an official statement after his conference with Captain Anderson, in the course of which he said:--

"It is not with the desire to condemn others, but simply because it is felt that the public is entitled to knew the facts that the following statement is put forward. The vessels sighted one another when far apart. The Empress was seen off the port bow of the Storstad. The Empress's green starboard light was visible to those on the Storstad. Under these circumstances the rules of navigation gave to the Storstad the right of way. The heading of the Empress was then changed in such a manner as to put the vessels into such a position as to pass safely.

"It has been said that the Storstad should not have backed out of the hole made by the collision. She did not do so. As the vessels came together the engines were ordered ahead for the purpose of holding the bow against the side of the Empress, thus preventing the entrance of water into either vessel. The headway of the Empress, however, swung the Storstad around in such a way as to twist the Storstad's bow out of the hole and bend the bow itself over to port. The Empress at once disappeared in the fog."

The statement adds that the boats of the Storstad immediately put off, and rescued about 350 persons, who were taken aboard, where everything was done for their comfort. The statements that there was the slightest delay on the part of the Storstad in rendering prompt and efficient aid did a cruel injustice to the captain, who did not hesitate to send out every boat he had, in spite of the desperate condition of his own ship.