IN last year's OPEN WINDOW we recorded the laying of the foundation stone of this building. This year we have to record its completion and the opening of the Offices for public business on March 24th. The building is an ornament to our town and with its finely chiselled granite front considerably enhances the appearance of Hill Street. The site is that where lately Mr. Peter Corcoran (now of North Street) had his shop and residence.  Formerly it was occupied by Mr. Byrne, Leather Manufacturer, and in still earlier years it was the private residence and tan yard of the late Mr. Peter Murphy -- afterwards of Marcus Square -- father of our present well-known townsman, Mr. Patrick Murphy. Full particulars re plan, dimensions, etc., relating to the Offices were given in THE OPEN WINDOW for 1898, as also photographs of the site before the new building was commenced, and after building operations were completed. 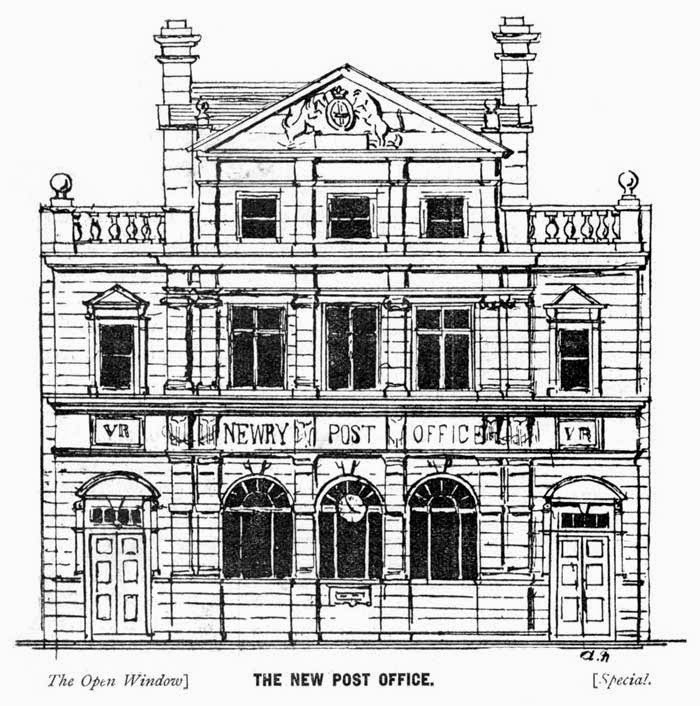 THE past year has not abounded in improvements. In this it has been unlike its three predecessors. It has, indeed, been full of rumoured changes, and profound interest has been stirred by the recently-projected Public Harbour Trust -- a scheme which offers a curious complication of problems. (As we go to Press it has been announced that the representatives of the ratepayers have offered the Navigation Co. (provisionally) £20 per share for their interest This may seem a very exorbitant price, but those who are conversant with the whole scheme and its possibilities are, no doubt, justified. It must not be lost sight of that one of the possibilities is "deep water" -- eventually, and that Newry's salvation hangs thereby.) Much has been heard of railway schemes, and the industrial development of our town has proved itself a subject of earnest consideration, and a vigorous movement for the establishment of a Technical School for Newry is likely to be put in motion and successfully carried through.

Although there have not been many structural improvements, it must not be supposed that our building firms (whose activities are so allied to the welfare of trade in general) have been idle. Mr. Alex. Wheelan's chief contracts during the year have been in other parts of the country, for his firm competes successfully with the large contractors of Dublin and Belfast. He has completed the new Post Office in Armagh, -- which is built after the style of our Newry office, only with a brick front, -- and he is at present engaged on an extensive contract at the Military Barracks in the same town, while his present Government contracts include work in Mullingar, Longford, Lusk (Co. Dublin), Monaghan, and Dungannon, and a very large one has just been finished at the Curragh Camp. Newry work has, however, not been altogether omitted on this firm's list. The Post Office has been finished (see page 88), and Mr. Wheelan having purchased the property adjoining it (formerly O'Rorke's millinery warerooms, and prior to that Mangan's outfitting shop), which consisted of an ancient-looking 1-storey structure, has erected a very handsome, modern 3-storey building in its place, which consists of shop and dwelling-house, and separate offices. Mr. Wheelan's local work also includes extensive repairs at the Military Barracks, a new system of drainage to the Custom House, and several minor matters. We must also note that he built a fine Bungalow at Carlingford for John Carvill, Esq. This is, we believe, one of the prettiest residences on either side of this picturesque bay.

Important local contracts have been carried out by Mr. Denis Neary's firm. On another page (89) we refer to the Erskine Street houses, and the new road and footways. Extensive contracts have been carried through during the year in the Convents, and "The Home" has been completed by the erection on the grounds of a massive granite wall. Mr. Neary's chief undertaking, however, is the building of 12 very handsome private houses on the Dublin Road. The site is an ideal one, and the houses are being built on the most up-to-date and approved lines. Every modern improvement and scientific sanitary arrangement will be provided. They will be built in groups of four, 3-storey, with bay and dormer windows. There is no doubt this terrace of houses will help to supply a pressing want in Newry -- viz., handsome private residences with every convenience, at a rent of about £40; and Mr. Neary is to be congratulated on his spirit of enterprise.

Mr. Mahood's firm still devotes its energies to work out of Newry, but the contracts carried on through the districts keep the Newry staff constantly employed; while the building and contracting firm of Mr. James Hughes has been constantly employed, and maintained its reputation for first-rate work.

In Hill Street a notable improvement is the renovation and re-decorating -- inside and out -- of The Imperial Hotel, Marcus Square, which has become the property of THE VICTORIA HOTEL CO., LTD. These improvements were carried out by the two well-known firms -- Mr. John Thompson (painter) and Mr. M. Smith (plumber and gasfitter). The change effected in the Hill Street portion of "Walker's" Mill-offices is most conspicuous. These spacious premises were taken early in the year by Mr. JOSEPH WRIGHT, and re-modelled and fitted, to suit his extensive printing, stationery, and cycle trades.

The firm of M. Ward & Sons have had their premises newly done-up and fitted with a particularly brilliant incandescent gas service. The appearance of the premises, indeed, is one of the best advertisements as to the style and character of this firm's work. Ecclesiastical painting and decoration form a special feature of the Messrs. Ward's trade, and quite a number of church contracts have been undertaken, including the Dominican Church and the Pro-Cathedral, Newry, as well as several in other towns and districts. The glass-work panelling and decoration on Mr. Charles O'Hagan's Medical Hall was also done by Ward & Sons, and they have been engaged in a great many other contracts of importance during the year.

In a former number of THE OPEN WINDOW we gave particulars of the opening of the Frontier Mineral Water Works by Messrs. John O'Hare & Sons, and prophesied that this firm was bidding for marked success; this has now been realized. The firm has brought to Newry from the Brewers' Exhibition in London (1900) a prize for the "excellence and quality of their mineral waters." The competition was "open to the world," and this is the only Irish firm entitled to the honour.

Messrs. Sampson & Co., commission agents, have added another agency to their already extensive list -- one for Greer's famous O.V.H. Whiskey. This brand enjoys a unique reputation amongst connoisseurs, and is rapidly gaining popularity in the market.

Among the changes of the year may be noted the removal of Mr. James Hendren, bootmaker, from 33 Hill Street to 104. Mr. Hendren intends to devote special attention to the ready-made trade, in order to bring his business in this department up to the same high-class standard as that distinguishing the "made-to-measure" department of his firm. The opening of millinery warerooms in the upper part of Messrs. Connor & Sons' branch establishment, 19 Hill Street, by The Misses White, should also be mentioned.

A new Pillar Letter-box has been placed at the Car-stand, Hill Street, opposite Messrs. James Warnock & Co.'s.

In the Pro-Cathedral two handsome stained-glass windows have been erected; one the gift of Mrs. S. Toman (Rathfriland), the other by the Confraternity of the Sacred Heart. Both are fine specimens of artistic beauty and workmanship. 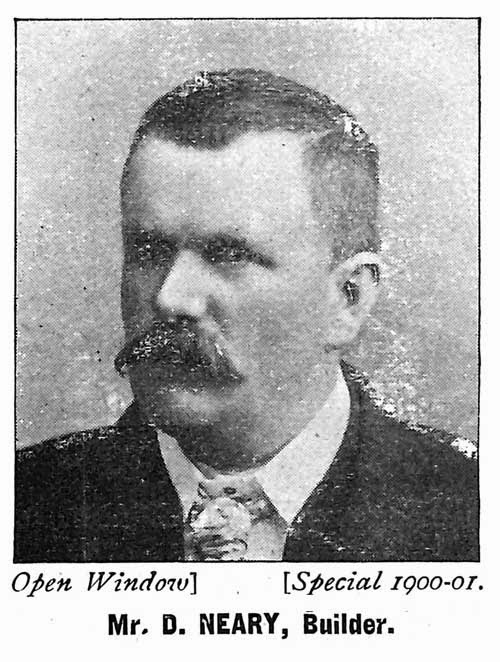 ON Wednesday, 19th of September last (1900), these houses were formally taken possession of, on behalf of the town, by Dr. M'CARTAN, J.P., Chairman of the N.U.C. The houses, 21 in number, are built on the new thoroughfare (an off-shoot of Canal Street), entitled Erskine Street. They fill a want much felt on that side of the town, and will be available for the military, who have always made the want of house accommodation a source of complaint. In event of the Army authorities not availing themselves of the houses, the artizans of our town will be only too glad to become tenants. As reported in THE OPEN WINDOW of last year, the Council borrowed from Government £5,000* at 3½ per cent., repayable in 50 years, and the tender of Mr. DENIS NEARY, builder, to complete the houses for £4,800, was accepted. His contract has been carried out most successfully. The houses are a credit to their builder. They are of red brick, two storey high, neat in style, well-lighted and well-placed. The town is certainly to be congratulated on having a Council in power who put the ground at disposal to such excellent use. The weekly rents fixed are as follows:-- 7 houses at 6/6 each, 1 at 5/6, and 13 at 5/- each. Mr. W. J. Watson was the architect. Mr. Neary also tendered successfully for making the foot and roadways to these houses, and the work is almost completed.

This article was originally published in "The Open Window Illustrated - Literary Annual and Year Book of Local Annals" in 1900 which was centred on the Newry area.
Posted by an extract of reflection at Thursday, May 29, 2014