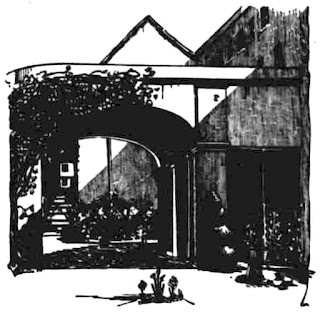 IN the quiet fields of Co. Londonderry the oats are ripening fast; the chaffinch, weary with his mating and the summer-long feeding of his fledglings, has no song.

Not a leaf stirs in the heavy foliage of the ancient trees in the demesne around Lissan House. The house itself is hidden from view by these great trees and the driveway that leads to it twists and turns as if the very path would safeguard the dwelling from a stranger's sight,

Lissan House is grey and vast and very self-sufficient. The rambling old walls contain a laundry that would need an army of maids for its efficient running and the cobbled coach houses could take six carriages and still have room for more.

There is even an old forge within the house with an anvil where the pike heads were hammered out long ago.

Lissan was evidently quite a feudal community when Charles I came to the throne. Indeed, the eatate must have formed a village nn itself when the row of white cottages beyond the stables was inhabited by the men and maids who served house and family.

In that part of the house occupied by the family a wide oak staircase with the twisted rails, characteristic of the Jacobean period, rises roof high, like a huge Chinese box. This coach-wide staircase opens on to each floor in such a manner that one has the impression of having access to every room in the dwelling, just as a child, removing the facade of a doll's house, can see all the rooms at once.

Like all houses with a long family tradition, Lissan has been rebuilt and added to from time to time, and each generation has left its mark. The wallpaper in tha drawing-room, gay with a pattern of exotic birds and flowers, is well over 200 years old – one of the first few hand-made papers imported from Japan.

There has been a dwelling in this place since 1620, and the Staples family have inhabited it since the baronetcy was first granted in 1628. Sir Thomas Staples held the title in those troublous days alter Charles I was beheaded, when Cromwell’s iron hand was heavy on the Irish.

It was Sir Thomas who purchased Cookstown from a Dublin lady — it is said for £325 — and in his absence the house was burned by the rebel O'Quinn, and his wife and four children seized. Lady Charity and her children were eventually released, but whether they were ransomed or whether they escaped is not known. Certainly they were re-united with Sir Thomas at Londonderry.

The grass is very green over these old battlefields, and although the house itself bears little witness of the wild happenings of those Stuart times, the Staples name and the stories handed to each succeeding generation, remain to remind us of a time when the still cornfields held quiet, but no peace.

Next week – The Old Inn, Crawfordsburn