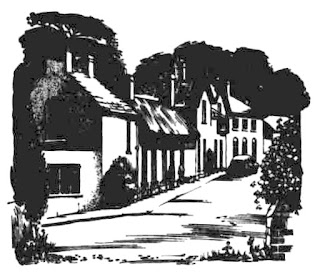 THE ripening wheat is gilding the fields along the highway that leads through Crawfordsburn from Holywood Priory to the ruins of Bangor’s ancient Abbey. How many and how different the feet that have trodden this old road in the last fifteen hundred years.

The sandalled feet of pilgrims and monks and scholars, journeying between Bangor and Armagh; the cross-thonged feet of the Danes who desolated Abbey and town; the leather shod feet of the settlers, wary of the wolves that lurked thereabouts, the marching feet of Count Schomberg's army on the route from Ballyholme to the Long Bridge at Belfast — do any of these footsteps echo eerily about the gilded fields?

From the time that man left his caves, outgrew his liking for wood, and began to journey from place to place, there have been inns along the roads he travelled.

Certainly there has been an inn at Crawfordsburn since the hamlet took its name from those Scottish Crawfords who were tenants of Sir James Hamilton in the time of James I.

Before the time of the Crawfords the name of the place was Ballykillare, which Rev. J. O'Laverty tells us could mean "the townland of the Western Church." Would a search reveal an ancient burying place?

To-day the Old Inn is the most striking feature of the old road, its white and black standing sharp against the blues and greens and gold of the landscape.

That part of the dwelling which has been standing since 1614 is still thatched, and the musicians' gallery within serves to remind us of a time when the inn was the meeting place not only of peasant and yeoman, but of the lesser gentry who came, of an evening, to sample the foreign wines provided by mine host.

In this particular inn some of these foreign wines may have had the added piquancy of having evaded the Customs' officers for a former owner discovered secret hiding places used by smugglers. There was considerable smuggling between the Down coast and the Isle of Man right to the end of the eighteenth century.

The Ardglass peasant-poet, Burdy, tells us, in verse, that the free-traders took out meal, fruit, flax, whisky, flour, and potatoes, and returned with sugar, coffee, wine and rum.

The name of the hostelry must at one time have been "The Old Ship Inn.” When, I wonder, was the sign of the ship disregarded.

After the Hamiltons, the Montgomerys and the Stewarts have planted this part of Ulster, the Old Inn became a stopping place for the mail coach making connections with the sailing packets at Donaghadee. Here the horses were changed, and many of the famous travellers to Ireland have rested, at least for refreshment — certainly the Duke of Wellington was once a guest and rumour has it that Peter the Great called when he made a visit to Ulster to study the manufacture of damask linen.

So many foreign coins have changed hereabouts in the 17th and 18th centuries that there was an accepted rate for the "broad pieces" as the local inhabitats termed the pistoles and money.

Nowadays, although the coach has given way to the touring-car, the broad-piece to the prosaic pound-note, there is still music in the gallery or Old Inn as the fiddles play gayly to the wedding-guests, in the way they have almost "since Adam delv'd and Eve span."