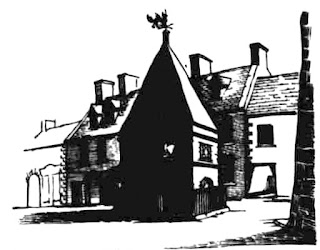 When Rome fell and barbarity overwhelmed Europe, the seeds of civilisation were held in the Ards peninsula. At Newtownards, in the 6th century, St. Finian had a school; later the Normans formed a settlement on the flat plain with its protective surrounding hills, and here, for centuries, the Scots came to trade.

Voyaging from Portpatrick, the traders hired horses at Donaghadee to convey their merchandise to Newtownards, and there they displayed their wares in the market place. The old coaching inns around the High Street saw much traffic. Their goods exchanged for silver or gold, the Scottish traders no doubt took their victuals at these hostelries, for them a temporary home in a strange land, as inns have been temporary homes for travellers since time immemorial. Refreshed and rested, the merchants would begin their long homeward journey.

Many of these Inns are in existence to-day, the wide gateway to the stables speaking to us of a time when the hooves of many horses rang out on cobbled streets.

The Old Cross Inn bears the date 1619, and doubtless there was an Inn on this spot when Hugh Montgomery, Laird of Braidstane, acquired the lands of Claneboye from Con O'Neill, last degenerate son of an ancient clan, a few months before the death of Elizabeth the First.

The Laird of Braidstane laid the foundations of Newtownards as it is to-day, bringing his own workmen, who left the imprint of their Scottish craft upon the place. Hugh Montgomery's craftsmen would gather in the inns whilst the new town was taking shape, and possibly it was here that they came to celebrate the erection of the cross that stands where four streets met.

William Montgomery, writing his manuscript in 1683, gives us a very clear description of the cross, and of the lay-out of the town.

He described the edifice as:— "a fair, neat, circular building, octagonal, all hewn freestone carved, painted and gilded, with a small door and stairs ascending to a battlement (which is breast high from the vault) without, and from the pavement of the said vault issue divers spouts carved with several antique heads, which at the Coronation and nativity days of our King disembogue wine to the glad and merry multitude.

"In the middle of this fabric and upon the vault aforesaid, stands a pillar of hewn stone of eight squares, 20 feet high, with a lion sejant on the top. This piece of work is called the market cross whence are made public (with the town solemnities) all proclamations that come from the Chief Governor of this Kingdom. The body of this fabric, which is seen of four streets, hath the King's Arms fronting to the great street."

Just now the Town Hall and the great square are gay with the scarlet and blue and gold banners put up to show the town's joy at the recent visit of Her Majesty Queen Elizabeth II. Great as were the rejoicings on this glad occasion they could hardly compare with the revels held in Newtownards when a momentary gleam of success for the Royalist cause came in 1649. Writing of those celebrations, Montgomery tells us:—

"I saw the claret flow in abundance from the spouts of the market cross, and catched in hats and bowls by who could or would; the noise of trumpets sounding, levitts, drums beating, the soldiers discharging 3 volleys apiece, as the brass guns did at his Lordship's house, at the healths drunk to three Royal brothers and at night bonfires in the streets and illuminations of candies at the windows.""

However, Cromwell soon made short work of the rising, and having quelled the English Royalists, he turned his attention to their Irish counterparts. In April, 1650, the 3rd Viscount Montgomery, who had rejoiced so wholeheartedly at the news of his Monarch's accession, submitted to Cromwell at Clonmel and was banished to Holland. Not for eleven long years was the market cross to see the proclamation of Charles II's accession and the ancient hostelries, the rejoicings attendant upon such news.

Posted by an extract of reflection at Monday, October 19, 2020