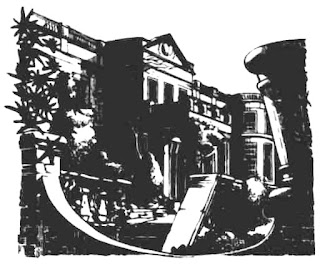 Congress of Vienna chairs are in the dining room

ALREADY there is about the countryside the first vague whisper of autumn. Along the shores of Strangford Lough the banked foliage that borders the grounds of Mountstewart has taken on a flush of russet. Even now the first burned leaves have drifted on to the serene waters of the little lake beyond the house, where they float like pale gold barques among the rosy lilies.

The house itself waits, in quiet dignity, ready to withstand the wildest storms of the turn of the year, at it has since it was built for Alexander Stewart, somewhere about the year 1780.

When the first instalments of "Works in Architecture of Robert and James Adam" began to appear in 1773. Robert Adam wrote:— "We have adopted a beautiful variety of light mouldings, gracefully formed, delicately enriched and arranged with propriety and skill." This phrase describes exactly the ornament in the older portion of Mountstewart, for here one finds all the delicacy of line, the modesty, the dignity and the good manners that characterised the Age of Elegance.

The most charming room in the dwelling is the graceful breakfast room, believed to have been the entrance of the original house.

A long window overlooks the paved and beflowered terrace which surrounds the entire house. The floor, inlaid with a wood of a darker hue, echoes the design of the ceiling in a perfect unity of form.

The doors, leading on one side to a study, on the other to Lady Londonderry's sitting-room, have marquetry panels whose pattern is a replica of the plasterwork on their surrounding arches.

Mountstewart abounds in mementoes of the celebrated Lord Castlereagh, who was Britain's
Foreign Minister, when the Congress of Vienna was interrupted by the news of Napoleon's escape from Elba.

Huge bound volumes of the Castlereagh papers almost fill one wall of the study. A portrait of Lord Castlereagh shows us a pale young man with thoughtful eyes, and a strong mouth, a complete contrast with his gay young brother who was Ambassador in Vienna at time of the Congress.

In the dining-room newly decorated in an inspired dark yellow which is a perfect foil for the gold framed portraits of the Stewart ancestors in their dark crimson robes, are the very chairs used by those representatives of Great Britain, Austria, Prussia, Russia, and France who attended the Congress in 1815.

Upon the backs and seats of these chairs are embroidered both the personal arms and the arms of the country, of the representative who used the chairs in Vienna.

Lord Castlereagh brought back other souvenirs from Vienna. Each Minister presented him with a gold snuffbox." the lid of which bore the Ministerial portrait in miniatures in their gold frames still exist to show us the countenances of Metternich and Talleyrand and the others, but the snuffboxes were melted down, sometime in Queen Victoria's reign, and turned in to an ink pot of solid gold.

[Last few paragraphs dealing with the gardens were faded and unreadable but will be added when access to a better copy has been made.]