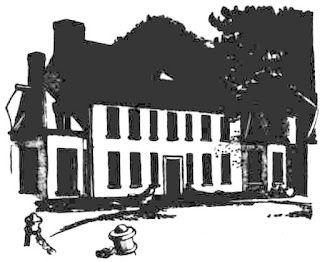 Springhill, Moneymore – The House of 'Good Will'

IN the township of Ballindrum (the township of the hill's ridge) about five miles from Lough Neagh, is Springhill. The long low house, charming in its white simplicity, its symmetry surely prophesying the classic dignity of the Georgian period, stands on a high hill. Copper beeches line the approach to an open courtyard and break in fronds across the gleaming facade of the dwelling. Beyond the arched doorway in the wall lie the old Brew House, the Turf Shed, the Slaughter House, and the Laundry. On the dwelling’s further side could once be seen a second courtyard or bawn, where cattle were herded in times of trouble.

In her lovingly written book on the house, Mrs. Lenox-Conyngham describes the beauty of tha Dutch garden, sweet with old-fashioned flowers planted by bygone hands, with its walls blossoming with the Macartney rose, the first of its kind to be brought from China to Ireland, nearly two centuries ago.

SPRINGHILL has been the home of the Conynghams since the family came to Ireland with those first settlers who had grants of land from James I. Tradition has it that when the native Irish rose, in 1641, and horribly massacred the settlers, the Conyngham owner was absent, and was saved. The title deeds of the property were destroyed, and it was not until 1652 that Cromwell granted new title deeds to that William Conyngham who had been High Sheriff of County Derry some twenty years before.

This same William Conyngham had a son known to succeeding generations as Good Will. The story of the marriage of Good Will and 16-year-old Ann Upton, both of whom were to be so nearly concerned in the siege of Derry, reads like a page from an old romance.

THE union, happy as it was, was childless, although Ann herself was one of a family of 20 We can picture them in 1680, at the beginning of their happy forty years of marriage, in that peaceful period that preceded Dutch William’s accession, making additions to the beloved old home and creating new gardens and orchards.

Their peace was savagely shattered when Good Will received a secret warning of the impending troubles, and sent his Ann, for safety, to stay with Alderman Lennox and his lady in the city of Derry.

Ann would not lack company in Derry, for besides the Lennox family, she numbered among her connection James Conyngham, a merchant of the city, and two younger members of the Conyngham family, Alexander and John, who were apprenticed there following the English custom for the younger sons of good families.

WHILST Ann busied herself in Derry Good Will was active on King William’s behalf. Now Colonel Conyngham, he was in command of Colonel Canning’s regiment of foot, and was one of the six members of King William’s Supreme Council.

Throughout the long days of the siege, whilst Ann played her part within the city, how proud she must have been to know that her two young relatives were among the Apprentice Boys who acted so gallantly in Derry’s defence!

When peace came, husband and wife reunited, returned to Springhill to spend long years in mutual love and sympathy.

Reminders of Good Will are at Springhill yet, among them the gold watch presented to him by the Irish Society for his work as "Overseer of the woods and forest of Ulster," the testament bearing the signature of George Walker, and a long gun, with an inlaid silver barrel, that was used at the siege. The tenderness of Good Will’s affection for his "deare wife” is very evident in the provisions of his will. He died in 1721, but for thirty years his Ann lived on alone.