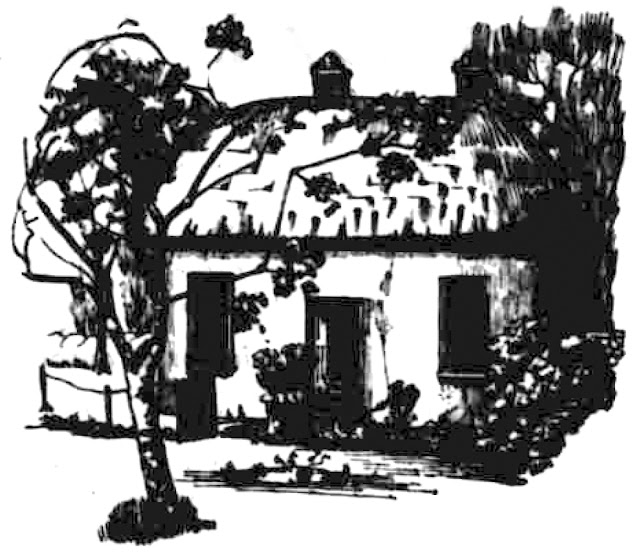 DOWN a country lane that divides two fields and alongside Kilroot railway station stands a curious oval thatched cottage, surely a prototype of the fairy tale gingerbread house. To this quaint dwelling place came Jonathan Swift in 1694 when he was twenty-seven years old, and it was here, towards the end of his service at Kilroot. that he finished his "Tale of a Tub."

Dissatisfied with his life at Moor Park as Sir William Temple's protege, his curious moral sense had made him feel justified in taking Holy Orders. Other employment had been offered to him in the form of a clerkship with the Master of the Rolls in Ireland, and thus the Church was not merely a last resort.

Swift had met King William the Third at Moor Park; the King had promised future favours, and when the prebend of Kilroot, in the Diocese of Connor, became available, the Lord Lieutenant exercised the Royal Patronage and bestowed the prebend upon Jonathan Swift by letters patent.

Beside Belfast Lough, among the dour fisher folk of Kilroot, Jonathan Swift, later to benefit the Irish in so many ways and to become the first settler to think of himself as Anglo-Irish, spent two bitter winters.

There were few adherents of the Church of Ireland in Kilroot, the fisher folk being mainly Presbyterian, and Jonathan Swift's church was usually empty. The unhappy young minister, nicknamed “the mad parson" by the Kilroot folk, would walk the shores of the Lough, his gown flapping in the wind, skimming stones into the sea.

Picture the scene as the wild-eyed young man carried great boulders into church followed by the wondering fisherfolk, then imagine their bewilderment when, having achieved a hearing Jonathan Swift locked the doors and delivered to his unwilling congregation a short and scathing sermon.

His sojourn at Kilroot was not one of unrelieved grimness. He had the attention of families like the Dobbs of Castle Dobbs, and, in Carrickfergus itself of the Clements and of Lord and Lady Donegall. Moreover his near neighbour was a Mr. Waring, a friend of his Trinity days, nephew of the Rev. Roger Waring, rector of Donaghcloney (Waringstown), where Swift's Uncle Adam had a house. Jonathan Swift met and fell in love with Mr. Waring's sister, Jane, whom he promptly re-christened Varina Valina, with a small income of her own, proved to be a rather calculating little flirt who put a number of difficulties in the way of marriage with Swift; she “enjoyed" ill-health; she feared poverty on the £90 a year that made up the stipend of the livings of Kilroot, Templecorran and Ballynure. Indeed, her prevarication quite cured her admirer of love, for he never again forgot himself in passion.

Their correspondence continued spasmodically after Swift's return to Moor Park; then, when Swift came back to Ireland to take his seat in St. Patrick’s Cathedral with an income now of some £200 a year, Varina wrote with greater ardour. Now it was Varina who was anxious for marriage, but a cold and angry letter from Swift, setting out his requirements from a wife and his own shortcomings as a husband, finished the correspondence.

Varina never married, and the next year Stella, now nineteen, came from Moor Park to Ireland — Stella whom Swift is reputed later to have married secretly in the Bishop of Clogher’s garden.