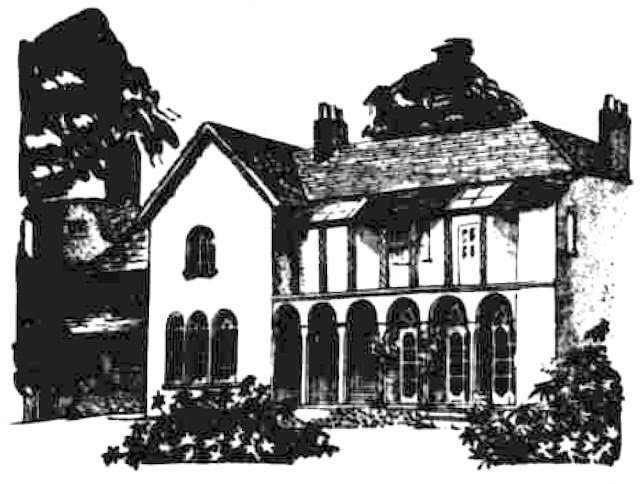 THE wild roses froth pink and white along the hedge on the road that leads from Cookstown. The scent of new-mown hav drift* from the June meadows and the deep heart of Ireland is quiet with summer stillness. Bush and briar were heavy with the year's green, even the song of the blackbird had a soft and lazy trill, on the afternoon that I took the winding lane to Lissan Rectory.

The drenching sunshine showed this house of Nash's at its best, for, here at Lissan, Nash the light-handed, the careless and the socially successful, chose to design in the Italianate manner.

Not for the Rev. John Staples, far whom the dwelling was built in 1807, a house heavy in the Gothic manner of Killymoon Castle, or ponderously palatial as for George IV at Buckingham Palace but as exquisitely airy and dazzling white villa that is as appropriate in its green Irish setting as it would be under a Mediterranean sky.

Yellow roses caress the slender columns of the high and rounded arches of the loggia in front of the drawing room. Here, in the first decade of the nineteenth century, the Rev. John Staples' wife doubtless entertained her friends to tea whilst the hot June sunshine cast those same entrancing lavender shadows along the white walls.

There was wealth at the Rectory in those years, for the Rev. John could afford to spend £1,500 on "chaise-hire." The £1,300 odd that he spent on his lovely rectory was probably well within his means.

What a different picture is presented in the little church where the Rev. John must have preached his Sunday sermon! Here, on a hill that commands a view of half Ireland, all is quiet dignity and simple grace. Here the summer sun distils a rosy light through the chancel window dedicated to that Vicar of Lissan who became Governor of Londonderry in 1689, and died at the Battle of the Boyne.

There have been vicars of Lissan since 1440. Not always has June stillness brooded over this place for a tale is told that in 1642 the Vicar was murdered. No more seems to be known than this bald fact, but is it mere coincidence that in this same year Lady Charity Staples and her four children were seized at Lissan House by Neil Oge O’Quinn and taken prisoner.

The known facts are intriguing. Sir Thomas had gone to Cookstown where he had purchased some property the previous week. We conjecture: Did he leave his Lady and their four children, "all his pretty chickens and their dam" in the charge of the good Vicar knowing the rebel O'Quinn was in the district, yet fearing not to complete his business in Cookstown lest Mrs. May return to Dublin and sell her property in another?

And did the good Vicar lose his life in defence of Lady Charity and those four children? Did he, before he died, influence O’Quinn so that eventually Lady Charity and her children were released and were able to join Sir Thomas in Londonderry? Or did the rebels seize the man of God in his own church?

We do not know: and the church and the still meadows that clamour to us so loud of
the evanescence of things material, are silent on these points.