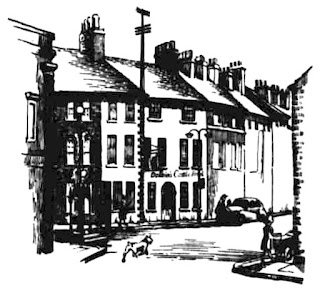 
Of all the castles that McSkimmin listed in his history of Carrickfergus, Dobbin's is the most easily recognisable. To-day it is an hotel, but its low-ceilinged rooms and warren- like passages retain most of their sixteenth century character. Not many years ago, during alterations to the place, a cavernous fireplace, large enough to roast an ox, was discovered. The great oak beam that forms the chimney-piece of this monstrous hearth, is blackened by the heat of many fires. Adjacent to the fireplace is a cupboard behind which a secret passage runs to one of the bedrooms. This was, doubtless, a way of escape in more troublous times.

The name of Dobbin figures largely in the annals of Carrickfergus. Several of the family became mayors of the town. It seems that as early as the seventeenth century the castle was kept as an inn, although the Dobbins were of good and ancient family.

William Dobbin, who was mayor in 1576, 1580, and 1583, was a friend of that gallant Elizabethan, Sir Moyses Hill, founder of the Downshire family. Sir Moyses, a man of ancient lineage but no fortune, came to Ireland to serve under the Earl of Essex, and having proved himself a most able soldier was made governor of Olderfleet Castle. Around 1600 he was a frequent visitor to Dobbin's Castle, and there he met and fell in love with Anne, William Dobbin's beautiful daughter, then only twenty. This hard bitten soldier of over forty made such an impression on the lovely Anne that she married him, and for several years they lived at Dobbin's Castle. Anne proved to be a good wife and mother, both to her own son, Arthur, and to her little stepson. Peter.

It is interesting to trace the thread that links the Downshire family with this little pre-Elizabethan house in Carrickfergus, High Street. Sir Moyses had built himself a fortified manor in County Down, which he called Hill's Court. The locals re-named it the Hall of the Hills — now Hillhall, and it was to Hillhall that Sir Moyses brought Anne and his two young sons. In his thirty or so years of marriage with Anne he made the Hall of the Hills a happy well managed place. The forty thousand acres were well farmed, the tenants prospered, and the old baronial customs of a yule log at Christmas and a Maypole in the Spring were kept

Let us trace this linking thread a little further, for it takes us to the very heart of Ulster.

When Sir Moyses died, full of years and grace, he was succeeded by his eldest son, Peter, Anne's stepson. Peter rebuilt the old stronghold of the Magenisses, founded a town on the mound that formed the villages, and originated Hillsborough. Peter did not live very long and was succeeded by his only son, Francis. As Francis died without issue, the estate passed to Anne Dobbin's son, Arthur, the child that was born within a year of the marriage of the Carrickfergus beauty to the Elizabethan warrior.