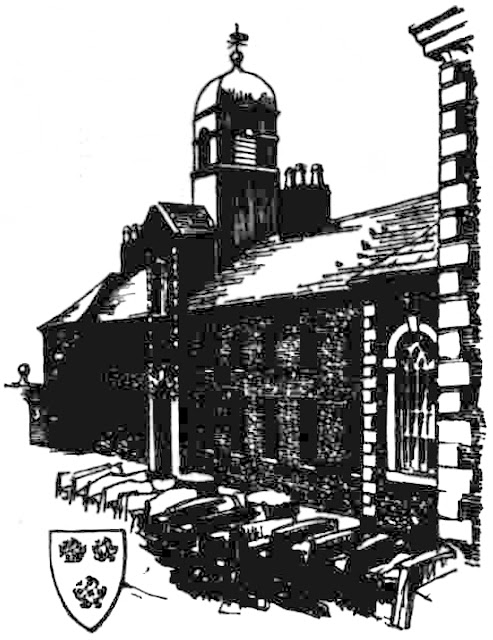 TO the casual traveller Downpatrick must seem a very uninspiring county town. To the pilgrim seeking the essence of Ireland there comes a very different impression.

Beyond the blatant modern shopfronts of the main street is Georgian English street. Its tall windows and elegant doorways with their graceful fanlights speak to us moat eloquently of a more leisurely past.

The cloistered stillness at the far end of the street, where the cathedral stands, is disturbed only by a chaffinch singing in the flowering chestnuts, by the far-off cawing of rooks and the distant noise of traffic. Here a Celtic cross points upwards to the four spires of the square tower, soaring heavenwards in stone song.

There also stands a lonely monument to the memory of a man whose ideas were far in advance of his time — the Southwell schools and almshouses, founded by Edward Southwell in 1733.

A portrait of Mr. Southwell reveals to us a generous good-humoured mouth, strong nose, full, shapely eyes and broad forehead — a kindly countenance, outward sign of an inward grace.

This eighteenth century philanthropist could be firm, however. This is shown in the somewhat acid correspondence which arose between Mr. Southwell and John Trotter, the first Steward, on the one side, and the Dean of Down on the other. Controversy arose because the Steward, upon his employers instructions, had dismissed a schoolmaster without first consulting the Dean.

Relations between church dignitary and landowner were little better some thirty years later, although the union referred to in the following extract from a letter to another Mr. Southwell, written by John Trotter’s son, may have sweetened matters:— "You will smile when I tell you that tho' I dislike this man (the Dean) much, his daughter and I have settled the preliminaries of a bargain for life ... I am determined that I will have the girl, tho' without one shilling — the little I shall have will he a competence for the extent of my own desires, and I will trust her, that she will not add to them."

The almshouses form the long centre portion of the building, the schools and master's and mistress's residences being at either end. Unfortunately the road fronting the facade has been raised, and its full elegance is no longer evident at first glance. Nothing, however, can detract from the beauty of the rosy brickwork, mellow and mossy with age, and the creamy stone which enhances it.

Edward Southwell's conception of a home for his twelve aged and Protestant persons is quite twentieth century, in effect the almshouses form a block of flats. Six little dwellings lie on either side of a high vaulted archway, guarded by commemorative gates.

Each one has a tiny sitting room with a little bedroom leading from it. First there are two small homes, one above the other, then, through an adjacent door, two more dwellings lie on each side of a common staircase, this plan being repeated on the floor above. The old men and women once had a common meeting place in the chapel-like room that lies beneath the tower.

Beyond the cobbled inner courtyard on to which the almshouses face, are small gardens, each with its square, clipped hedge to divide it from its neighbour. Once the
gardens were shaded by a linden walk, but the lime trees have been felled, and now only a few branches, growing here and there amongst the hawthorns, tell tales of past glories.

From the miniature gardens one can see the Grove of which John Wesley wrote in his Journal on June 13, 1778:— "I took my stand in the middle of the Grove the people standing before me on the gradually rising ground, which formed a beautiful theatre; the sun just glimmered through the trees, but did not hinder me at all. It was a glorious opportunity. The whole congregation seemed to drink into one spirit."

The trees are larger and more beautiful than ever; the natural theatre is as lovely: we lack nothing, here in the shadow of the cathedral, save the glorious spirit of those who once trod these paths.