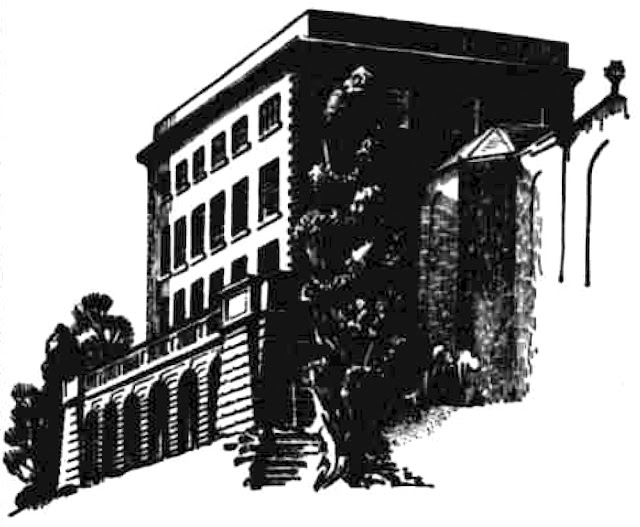 PASSING through Clogher I had the feeling that, somewhere in the flowering Tyrone countryside, I had left behind all the mundane things of to-day, and had found instead, all the charm of 18th century Ireland.

The square-towered Cathedral on the hill, the gracious palace standing next to it, the gay, yellow washed cottages with their many-paned windows and the half-doors from which one steps directly into the road  all these things worked a magic around me, and I should have felt little surprise if the modern chariot in which my journey had begun had changed, quite suddenly, into a phaeton drawn by a fat pony.

The Italianate splendour of the present Palace at Clogher, with colonnaded loggia and
imposing entrance, is in great contrast to the jolly cottages that confront it from across the street.

The edifice itself is as lordly as the names of the Bishops who saw the start and the finish of its erection. Begun during the tenure of Lord John George Beresford, it was completed in 1823 whilst Lord Robert Ponsonby Tottenham Loft us held the Bishopric.

One feels that the Palace this splendour replaced had possibly an appearance more in keeping with its surroundings. Mrs. Delaney wrote of that Palace:

"The house is large, and makes a good showish figure; there is a great loss of room due to ill-contrivance within doors. It is situated on the side of a hill so steep that part of the front next the street is underground. From that to the garden is 50 steps The garden is pretty; there is a fine, large sloping green walk to a large basin of water on which sail most graciously four beautiful swans."

Alas, the pretty garden is sadly reduced; the fine large basin of water" is now separated from it by more than one meadow.

Another of Ireland's writers to visit this place was Dean Swift. He was an intimate friend of Bishop Ashe, who held the office in 1697, and of the Bishop's brothers Dillon (Dilly of the "Journal") and Tom. The Dean had a name for this trio, he called them The Three Ashes."

According to Sheridan, son of Swift's great friend, it was this same Bishop Ashe whom Swift asked to discover the cause of his Stella's obvious unhappiness. Upon learning from the Bishop that Stella was distressed at the slander heaped on her because of her affection for him. Swift consented to marriage, stipulating that the ceremony was to be kept secret and they were to live apart as before.

There must be something in the Clogher air that is conducive to letters, for two of Ireland's writers were born in the district; William Carlton who wrote in the vein of Edgar Allen Poe, was born at Trillick in 1794, and Rose Cavanagh, whose poem, "The Black water" was praised by Yeats, was born at Clogher in 1859.

Before the might of the pen descended upon Clogher, however, the sword had held sway, for some of its Bishops had been known as "The Fighting Bishops of Clogher." Of these the most famous was John Leslie, who took up arms in the Royalist cause. He made his peace later with the Commonwealth to the tune of a grant of some 120 a year.

Now this Palace that stands upon ground that has seen so much of Irish history no longer belongs to the Protestant Church. By the Irish Church Temporalities Act it was sold to the Rev. John Gray. His descendants in turn sold it to the Roman Catholic Bishop of Clogher; to-day it is a convent, and in that garden where the lovely Mrs. Delaney walked, one sees, fenced off in a secluded corner, the pathetic graves of those women who have died within these walls.
FINA.