The Lore of Christmas

EXTENDING into the mists of antiquity far behind Christianity, lie the beginnings of religion, a natural movement of the human spirit towards the Divine: far behind every Festival of the Christian year, woven into the historical circumstance of each, lie similar occasions when men rejoiced and worshipped. Thus our great Festivals are native to humanity from ever there was man, and the Christian celebrates them as purified in the baptism of Christian thought and sentiment. So it is with Christmas, the supreme occasion when we set aside all that forbids the mingling of joy with worship.

The name “Christmas” sets the tone of the occasion, for Christmas is The Christ Mass or Feast, a Holiday in His honour. We shall find as we look at the customs of the Festival that this idea of holiday for His sake is either the origin of each custom or has submerged within itself earlier and pre-Christian elements.

Christmas without its decorations would be foreign to sentiment. Taking pride of place is our use of Holly, Mistletoe and the Christmas Tree. Seasonable significance attaches to each.

HOLLY, by tradition The Holy Tree. In pre-Christian Roman times Holly was used in the Saturnalia. Many a god and goddess was believed to lurk in the groves and woods of the Ancient World, and, being humanly imagined, was thought to feel the rigours of the winter. Evergreens were therefore brought indoor to home and Temple at Saturnalia in the belief that god and goddess, sheltering in the foliage, would thus come to sojourn under a human roof-tree until the burgeoning of Spring. In this old custom lies the origin of our use of sprays and festoons of greenery at Christmas. Later a Christian significance attaches to the use. The Crown of Thorns was claimed to have been Holly, and it was the blood shed at Calvary which dyed the berry scarlet. Thus the Holly, symbolically, linked the Birth with the Atoning Death.

Alongside this lies the old Legend that the ROBIN in compassion sought to peck the torturing thorns from Christ’s brow and so became stained in his breast with the evidence of Nature’s care for her Noblest Son. 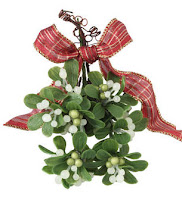 Similarly the use of THE MISTLETOE is pre-Christian and Druidic. The Ancient Celt held the Oak sacred and believed that when the oak tree slept in winter, its spirit came to reside in the Mistletoe which was parasitic to the oak and evergreen. To gather and hang it indoors meant the importing to a household of the mighty spirit of the oak and with it, good fortune. Here no subsequent Christian legend grew up; we retain a simple usage of the childhood of our race.

THE CHRISTMAS TREE is to the British people a newcomer. Its introduction is usually ascribed to Prince Albert who set one up at Windsor in 1841; but as a matter of history Princess Lieven actually forestalled him by several years, and so can claim the authorship of a gracious custom.

The use of the Tree is therefore of Teutonic origin and an old German Legend gives it grace. A forester and his family were seated before the fire one wild winter night when a knock came to the door. Answering, the forester was surprised to see a child cold, tired, and hungry. The child was brought in, fed and put to sleep in the bed of Hans, the son of the house who slept that night on the floor. In the morning the forester awoke to the music of some celestial choir, as it were at his door. Looking at his little guest he saw His face dazzling in its brightness. It was the Christ-child Himself. Departing, He took a bough of Norway spruce and planting it firmly in the ground. He thanked the forester and told him that “the Tree” would always bring him abundance in the depth of winter.

The decorating of the Tree is also Teutonic, and in Germany, when lighted up, the Tree is
always placed in the window. The custom of placing a decorated and illuminated Tree in a town street or city square is also part of the tradition, as is the placing of a Silver Star at the top — the Star of Bethlehem. Owing to the deep religious significance of the custom only presents which bring joy and pleasure are hung on the Tree. Utilitarian gifts are grouped at the foot, as in the days of yore.


“And now the fir tree . . .
Acclaimed, by eager blue-eyed girls and boys,
Bursts into tinsel fruit and glittering toys.
And turns into a pyramid of light”.
(Eugene Lee-Hamilton). 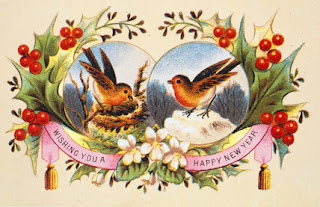 THE CHRISTMAS CARD is a modern custom, and the traditional picture with its white winter scene, its waits and its stage-coach or Santa Claus owes much to the marriage of the sentiments of Washington Irving in America to those of Charles Dickens here, Christmas, of course, in the British Isles, generally coincides with a mild spell of weather, but the conceit is pleasing.

Last century schoolboys were made to write and decorate an essay before they left Grammar School or Public School for the Christmas holiday. These essays were taken home as evidence of progress — a pleasing variation to the usual school report which could not fail at times to be condemnatory of ill-spent time during term. Proud parents displayed the fruits of youthful genius on the mantelpiece for all to see, and later an eager father decided to be a genius himself and sent the proof of his abilities round his friends. So arose the private greeting card with its seasonable appearance and message. Those who maintain the tradition in its happy freshness still make their own cards. Here commercialism is the foe of the Christmas spirit as elsewhere.

Christmas is a FEAST, Hence the association of a rich table with the occasion. In Britain at first a BOAR’S HEAD and the BARON of BEEF: our forefathers were doughty trenchermen. The Boar’s Head had an apple or a lemon in its mouth and its ears were decorated with sprigs of Rosemary.


“The Boar’s Head, in hand bear I,
Bedecked with bay and rosemary:
And I pray you, my masters, be merry.
I bear the Boar’s Head,
Rendering praise to the Lord”.


As a later gift from America came the TURKEY, now universally the Christmas Dish.

THE PLUM PUDDING, originally Frumenty, a stewed wheat dish. As ingredients were added it became Plum Porridge and so Plum Pudding. Traditionally it was beef or mutton broth thickened with brown bread, raisins, currants, prunes (the “plums”), spices and ginger-bread.

THE MINCE PIE was originally a real pie of chopped hare, pheasant, capon or partridge. Later it became a sweetmeat of raisins, orange, sugar and spices. By tradition each pie eaten in silence brings happiness for one month in the New Year, but nobody has ever solved the problem of the schoolboy who ate seventeen in silence and then wondered how many he might be allowed that day twelvemonths.

Bringing in the YULE LOG, the wood for the Christmas evening fire, was itself a ceremony involving singing, dancing and general hilarity. By custom the Log was not burnt out but a portion saved to light the Log of the next Christmas.

MUMMING AND WASSAILING. In mediaeval times young men dressed up and visited the houses of town and countryside, acting, singing, and dancing. Healths were drunk and good cheer abounded. The custom, now all but dead, is the remnant of the ancient Yule Festival in honour of ODIN, the Yule Father. This custom brought into our Christmas customs a Norse strand.

To the mediaeval period also belongs the PANTOMIME, originally a Play in Dumb Show. Eater, singing and the use of masks were introduced as well as the Ballet. Later still it became the special Christmas Variety Entertainment built up loosely around a Fairy Tale. 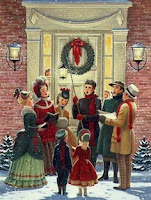 THE CAROL goes back to the period when in the mediaeval Church singing and dancing were part of the Festival. With the disappearance of dancing from the Church the Carol came to signify a merry song suggestive of joy and with the lilt of dancing in its notes — a happy song to celebrate the Nativity. The Carol proper dates to the disciples of St. Francis of Assisi (12th Century) and spread from Italy. Its value as a vehicle for the collection of alms fixed it firmly among the customs of the European Christmas.

BOXING DAY. Almsgiving at Christmas found its climax in the opening of the alms boxes after the Christmas Day Service. The distribution however, was reserved for St. Stephen’s Day, which thus became known as Boxing Day. The day had, however, another significance. It was for apprentices and servants a holiday from morning to night and The WREN BOY and many another traditional figure toured from house to house, singing, acting, dancing and seeking alms. It is interesting to us that both the whole holiday for servants and the early morning visit of The Wren Boy are features of the St. Stephen’s Day of Connacht and other parts of Ireland.

And so to SANTA CLAUS. St. Nicholas was the Patron Saint of Russia, of children, sailors and travellers. In the Dutch, San Nicholas: if you say it quickly enough often enough you will learn how the name slurred into the affectionate Santa Claus. 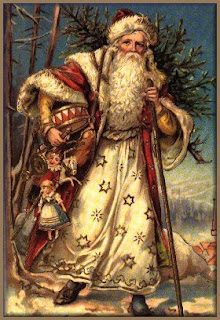 In Myra in ancient Lycia there lived a poor man with his three daughters. They were without fine clothes and had little to eat, but like all girls, they used to dream of their future. For them the dreams were about happy marriage and comfortable homes. None however would marry them who had no dowry.

In the same town lived Nicholas, wealthy and generous of spirit. He had discovered the joy of causing pleasure in the hearts of others, and was happiest if he did good by stealth. One night, from outside their open window, he discovered the plight of the three girls, and the very next night he lightly tossed three purses of gold into the room at their feet and slipped away. Three purses of gold! The meaning was clear, there was one for each, and before long each girl had realised her dream and was happy. Nicholas continued his habit, especially in gifts for children, and the dark days of winter were his happiest. In due course he was found out, and his name speedily became a legend. The Church canonised him, with perhaps more wisdom than in other cases, and so he lives for ever as St. Nicholas — evidence to us of the blessing of the Church on kindness done by stealth.

His sleigh, built, of course, in Fairy Land so as to travel through the air, and his reindeer are a Nordic idea and the final beautifying with legendary detail of the central custom of Christmas.

Christmas was not always celebrated on 25th December, but in the earliest times was twelve days later. The 6th of January is still called “Little Christmas”, and in many a part of Ireland you will still find it kept with lighted candles in the window for welcome and a door on the latch all night to let the Christ-Child in. A countryside so lighted is a blessed sight on “Twelfth Night” in parts of Connacht and Munster.

Behind all the richness of legend and custom lies the single impulse of joy and worship:— “Glory to God in the Highest, and on earth peace, goodwill towards men.”

A HAPPY CHRISTMAS TO YOU ALL

Reprinted from the Presbyterian Herald December 1949


Posted by an extract of reflection at Thursday, December 17, 2015