Notes on the Ulster Scot 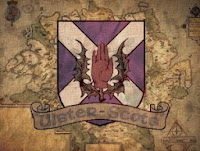 In Queen Elizabeth’s day, by an Act passed in the eleventh year of her reign, Ulster was declared to be “the most perilous place in all the isle.” This statement is not surprising, for the northern province was then the most distinctively Irish portion of the country. The native race in it was purer than that in the other three provinces. Of course the term purity can only be applied relatively to any portion of Ireland, as Huxley’s famous essay clearly demonstrated. The variety of races which constitute Ulster nationality is truly astonishing. “Saxon, or Norman, or Dane are we,” sang Tennyson. Doubtless considerations of space and metre prevented him from giving an exhaustive list. For the men of the northern province not only are Saxons, Normans and Danes; they are also Irish, Scots, French and German. The Irish were everywhere; so too were the Scots. There are no more than twenty miles of sea separating County Antrim from Argyll at one point. The Council in Dublin surveyed in the year 1533 the arrival of the Macdonnells with disapproval, declaring that “the Scots also inhabit now busily a great part of Ulster, which is the King’s inheritance; and it is greatly to be feared, unless that in short time they be driven from the same, that they, bringing in more number daily, will, by little and little, so far encroach in acquiring and winning the possessions there, with the aid of the King’s disobedient Irish rebels, who do now aid them therein after such manner, that at length they will put and expel the King from his whole seigniory there.”

In his excellent book on the Ulster Scot the Rev. J. B. Woodburn investigates the beginnings of this remarkable race. Of course the author admits that his genesis is in part to be found in Scotland, but he is careful to point out that the Ulsterman is as Celtic as a native of Munster. It is not a question of racial distinctions: the Ulster Scot is as Celtic as the Connaughtman. The M'Crea-Magee College in Londonderry, now an affiliated college of the University of Dublin, has had about a thousand students since 1865, when it was opened. The names of 146 of those students begin with Mac, and if the disguised Macs (such as Magill) are included we have a total of 200, or twenty per cent., bearing a single Celtic cognomen. One-seventh of the names of the ministers of the Irish Presbyterian Church at the present moment have names which begin with the same prefix. Here are some of the facts which Mr. Woodburn emphasises to prove that the Ulstermen are
Kindly Irish of the Irish,
Neither Saxons nor Italians.

The late Rev. Dr. Kane, the Grand Master of the Orangemen, was a typical Ulsterman, and he maintained that he never could forget he was also an O’Cahan.

Mr. Woodburn raises the extremely interesting question as to why the North differs from the South so much. It is plain that climate will not explain the differences, for the Donegal man is quite different from the Antrim man. Physical reasons, in this sense, are not sufficient. We think that the isolation of the northern province is no small cause, and in its explanation we reproduce what we have written elsewhere. A glance at the map will show that Ulster is surrounded on three sides by the sea; and that the fourth side has for its land frontier a line drawn from Dundalk to Bally-shannon. The waters of Lough Erne occupy the western half of this line, forming a complete defence from Ballyshannon to Belturbet, a distance of nearly fifty miles. The Eastern half is bounded by the chain of the Fews mountains, rising in front of Dundalk, long the outmost post of the English Pale. The centre of the line was protected by the counties of Monaghan and Cavan, interlaced with a perfect network of bogs and lakes. Through these there was only one road, that by Carrickmacross in the Barony of Farney. This pass was the Killiecrankie of Ulster, and was appropriately designated “The Gap of the North.”

Long after the other three provinces had been reduced to submission, chiefs such as the O’Nials retained a large measure of independence. Their aim was to keep their tribesmen faithful to the pastoral ideal of life; and this aim they achieved. They felt that such a life was best fitted to enable them to retain their authority and to preserve their followers from adopting English customs. Fynes Moryson showed that “plenty of grass makes the Irish have infinite multitudes of cattle, and in the heat of the last rebellion the very vagabond rebels had great multitudes of cows which they still (like the nomads) drove with them whithersoever themselves were driven, and fought for them as for their altars and families.” These nomads were the creaghts. When James I. endeavoured to give a system of administration to Ireland, he met with the greatest difficulty from this pastoral population, accustomed to wander about without any fixed habitation. Fynes Moryson describes their dwellings as made of wattles or boughs, covered with long turves or sods of grass, which they could easily remove and put up as they roved from place to place in search of pasture. North and West of Lough Neagh, it seems that the whole population was formed of creaghts, living this wild and nomadic life. At this period, there was not, according to Sir John Davies, one fixed village in County Fermanagh.

With the Ulster Plantation, 1608, appeared the definite appropriation of the lands among the new settlers, and with it disappeared the custom of creaght. The disappearance took time, for, so late as the year 1690, John Stevens records in his remarkable “Journal” (p. 161) meeting the creaghts, “which are much like the Tartar hordes, being a number of people some more some less, men, women, and children, under a chief or head of the name or family, who range about the country with their flocks or herds and all the goods they have in the world, without any settled habitation, building huts wherever they find pasture for their cattle and removing as they find occasion.” The fact is that the old form of society persisted longer in Ulster than in the other three provinces. Con O’Niall cursed all his posterity in case they learned the English language, sowed wheat, or built them houses. Speed explains Con’s reasons: “Lest the first should breed conversation, the second commerce of sustenance, and with the last they should speed as the crow that buildeth her nest to be beaten out by the hawk.”

Reprinted from the Church of Ireland Gazette of 8th May 1914.

Posted by an extract of reflection at Thursday, December 10, 2015