Notes on the Rock of Cashel 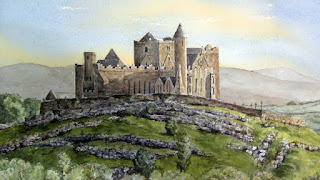 In O'Hanlon's "Life of St. Mochoemoc of Liath Mor," in the Diocese of Cashel, some curious particulars, from which the following is selected, are given concerning the Rock of Cashel:–

"Again was the same king (Failbhe) visited by St. Mochoemoc and by St. Colman, son of Dare. Failbhe spoke haughtily to both, but he was reproved by our saint, who declared that the bishop, his companion, on account of his nobility, relationship, and virtues, at least ought to receive some courtesy from the monarch, while Mochoemoc also announced that the Demon of Pride and the Demon of Lust held sway over him. Sensible of his crimes, the king felt sorrowful, and Mochoemoc then cried out to the Demon of Pride, 'Thou seed-sower of vices, take flight, and sit on yonder stone until joined by your companion, when I shall speak to you.' Next was the Demon of Lust banished from the king, and he went to keep company with the other wicked spirit. Then said the saint to both, 'Depart you two seducers to the north side of Cashel Tor, where we have not to travel, and may you do little mischief until the Day of Judgment.' The mediaeval legend pointed out the place of their captivity, where their moans and wailings were frequently heard." I think that the place of the captivity has been quarried away, so that the Demons of Lust and Pride are no longer imprisoned in the Rock.

According to the "Chronicum Scotorum," Failbhe died A.D. 636, and Mochoemoc A.D. 646. But according to the Irish hagiologists, Colman of Derrymore, a few miles east of Liath Mor, was son of Aengus, King of Cashel, who, according to the "Chronicum Scotorum," was slain A.D. 487. Dare, mother of Colman, is stated to be sister of St. Enda of Arranmore, and daughter of Conall derg, son of Daimen, King of Oriel, whose chief fort, Raith mor, was near the Cathedral of Clogher, in the demesne of the old bishops of Clogher. Adamnan in his "Life of St. Columba " makes mention of "Clocherum filiorum Daimeni," or "Clogher of the sons of Daimen," who was father of Conall derg, who endeavoured to prevent St. Molasius from taking possession of Devenish, in Lough Erne, which belonged to the kings of Oriel. Conall derg launched his boat on Linn an tairb ("the pool of the bull"), beside Portora (corrupted from the Irish, Port an tairbh), and set sail for Devenish, but the saint proved too many for the king of Oriel. It appears to me that Colman of Derrymore could not possibly be son of Aengus and Dare, but it is not easy to discover his real parentage owing to lack of particulars, but he may be identical with Colman of Bruis (Cluain Bruices) and Doon (Dun Blesce), in the Diocese of Emly.

O'Clery, in the "Donegal Martyrology," has made Colman of Cluain Bruices, son of Nathfraoch, and brother of Aengus, king of Cashel. No light is cast on this Colman of Cluain Bruices by the editors of Donegal Martyrology, Drs. Todd and Reeves, who do not even identify Cluain Bruices, but this I was enabled to do some years ago by means of the entry in the "Calendar of Aengus," p.167, concerning Colman, who therein is stated to have been the founder of the monasteries of Dun Blesce and Cluain Bruices, and I published this discovery, which after all was not very much in itself, being so easily attained, in one of our archaeological journals. There the matter for some time rested, but afterwards I was enabled to carry it further, when I found that Colman, or Columb, the founder of these old monasteries at Doon and Bruis, was the Colman or Columb, son of Eochaid and Aiglenn, who founded the monastery of Snamh Luthir, and this item is now for the first time published. Adamnan ("Life of St. Columba," ii., 43) refers to "Columbanus, son of Eochaid, a holy man, founder of that monastery which in the Irish tongue is called Snamluthir, who acted as guide in the same ear with St. Columba." Bishop Reeves identified Snamluthir as Slanore, in the County Cavan.

Years ago an old man told me that the Rock of Linfield, near Pallas Grean, was, in Irish, named Carraig Coluim Chille, or the "Rock of St. Columb Cille," and that the well and the old church on this rock were named Tobar Coluim Chille and Cill Coluim Chille. These particulars were also published, but at the same time I thought that the name Columb Cille had in the local tradition superseded the less well known Columb or Colman of Doon and Bruis, and, moreover, Lewis in his article on Grean Parish names this old church on Linfield Rock, Kilcolman, and states that it was founded in the seventh century. Thus it is likely that the monastery on Linfield Rock, like those at Doon and Bruis, was founded by Columbanus, the friend of Columb Cille, and hence we have opened a new chapter in the early ecclesiastical history of the Diocese of Emly, and probably also of Cashel, if Columb, son of Eochaid and Aiglenn, be identical with the Columb, who, according to the legend, accompanied Mochoemoc to the Rock of Cashel.

Posted by an extract of reflection at Thursday, December 03, 2015