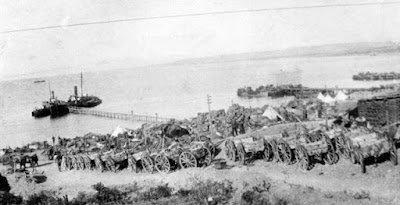 EARLY in December, 1915, it was stated in the House of Lords that a well-known General had recommended the evacuation of the British and French armies on Gallipoli. The statement was an extraordinary one to make public at such a time, and the soldiers were furious. But on second thoughts we said to ourselves: “Well, the Turks will never think we are going to abandon the expedition, because if we were we should not be such damned fools as to say so.” Even the Germans were misled into that idea.

The Berliner Tageblatt stated that the Dardanelles undertaking would have been abandoned long ago if it were as easy to get out of the jaws of the lion as to get into them.

Yet in a few weeks’ time we were off the Peninsula and enjoying our Christmas dinner far away from Gallipoli. The beast had been disappointed of his prey at Anzac. The jaws of the Turko-German lion had snapped ; but they had snapped a little too late. The story of how the enemy was outwitted is a fascinatingly interesting one; but it cannot even yet be told in detail. The joke of the whole thing, apparently, was that the Turks, instead of thinking we were evacuating, thought we were landing three new divisions to make another attack. But whatever happened, there can be not the least doubt that the Turkish commander was left lamenting the fact that he had at least failed to scupper our rearguard, and that he did not even capture one solitary machine gun.

The great thing from our point of view was to make it appear from day to day as if events were running their ordinary course. The cleverness and the resource with which this was accomplished will one day pass into history in detail. The final operation orders were a model of clear thinking and organization from the main principles down to the smallest detail of the Great Adventure. One and all, from the highest commands down to the privates in the trenches, carried them out with a loyal cooperation and enthusiasm worthy of the best traditions of our race. To a non-combatant on the Peninsula carefully watching events from day to day the position appeared to bristle with difficulties, some of which it seemed almost hopeless to surmount. To such an extent was this the case that the final triumphant success, when it did come, was a little difficult of realization.

Towards the close of the Great Adventure the humorists got to work, and it was no uncommon sight to see a comfortable dug-out bearing the notice — A Louer. Many of the men left messages for Abdul — “A Merry Christmas” and “Good wishes for the New Year.” One gunnery officer gathered together all the bottles he could find and piled them outside the mess. “The Turk,” he said, “will think our last strafe was the result of a great carousal.” One battery away on the right left its mess-table set with bully beef, a bottle of whisky, and some other odds and ends, “With compliments to the commander of ‘Beachy Bill.’” On the table in another dug-out there was left a gramophone, wound up and with the needle on the record ready to give out the tune. The air was “The Turkish Patrol.”

In our mess, however sad or serious we might be inwardly, we managed at least to maintain a cheerful exterior, extending mock sympathy to the “die-hards,” and chaffing each other as to the various capacities that we should presently be appearing in at Constantinople.

The idea was sedulously cultivated that the men were going into rest camps; but the intelligence of the colonial troops was too keen to permit of the continuance of this deception. A query to the O.C. Artillery as to when his second lot of guns were going into the “rest camp” elicited only a smile, and a suggestion that the guns were getting tired was an insult that rankled but could not be replied to.

In the dug-outs, in the trenches, and in the artillery observation posts various kindly messages, and even presents of food, were left for our gallant foes. One New Zealand artillery officer, whose skull was laid bare by a shell that came through the roof of his observation post, left a message for the Turkish gunners to say that the shell “did not get him.” That same officer carried on till his gun was withdrawn and safely placed on board an outgoing ship.

But underlying all this fun and frolic that is so well-recognized a trait of British character in the presence of extreme danger, there was a deeper feeling of sadness that we should be leaving, without a further struggle, the ground so dearly won — the ilex-covered valleys and hills, gained and held with the life's blood of so many of the noblest and best of New Zealand's and Australia’s sons. Somewhat poetically one of the New Zealand soldiers put this phase of thought to his Battalion Commander: “I hope, sir,” he said,” that those fellows who lie buried along the Dere will be soundly sleeping and not hear us as we march away.” The idea that his dead comrades might think the living were forsaking them seemed to have made a deep impression on his mind.

The spirit of the men towards the close was splendid. As the last days drew near the suspense grew greater. Did the Turks know that we were evacuating? Would they attack at the last moment our attenuated lines? These were questions that were ever uppermost in our minds; but even up to the last day we had a supreme confidence in our ability to repel any Turkish attack that might be launched upon us. The New Zealand General — now in command of the Army Corps — finally took all ranks into his confidence, and issued an order expressing his trust in their discretion and their high soldierly qualities to carry out a task the success of which would largely depend upon their individual efforts. In the case of an attack he expressed himself confident that the men who had to their credit such deeds as the original landing at Anzac, the repulse of the big Turkish attack on May 18, the capture of Lone Pine, the Apex, and Hill 60, would hold their ground with the same valour and steadfastness as heretofore, however small in numbers they might be. The splendid spirit of the men at the finish showed that this confidence was not misplaced.

On the Friday I went into the firing line on the Apex — the highest ground won in all the fighting — and found the New Zealanders, who still occupied that post of honour, tumbling over one another to be the last to leave. The Colonel commanding one battalion called for thirty volunteers from two companies. Every man in each company volunteered. Men were coming to their commanders and begging that they might be allowed to be in the last lot to go.

“Do let me stay,” said one man. “I was in the landing, and I should like to be one of the last to leave.”

It was just the same with the Australians—they all wanted to be in the “Diehards.” “Have you many volunteers for the ‘Die-hards’?” I asked one commander.

“Every mother’s son of them wants to be a ‘Diehard’!” he rephed.

And this, mind you, was at a time when we thought that most of the “Diehards ” would, for a certainty, be either killed, wounded, or taken prisoner — at a time when a little jumpiness and hesitation might very well have been expected. In one position on the left, when the last lot assembled at the cookhouse, it was found that there were two missing. One had gone back to the firing line for his pipe, the other for something he had left behind in his bivouac!

With such excellent organization on the part of the staff, and such brave and loyal co-operation and sang-froid on the part of the officers and men in the trenches, it is perhaps, after all, not to be wondered at that the Turks were busy shelling the vacant trenches and the deserted beaches a day after men, mules, and guns were already well across the Gulf of Saros, in the language of the official dispatch, “to be employed elsewhere.” They had triumphantly succeeded in one of the most difficult of operations — in a feat that is unique in the annals of warfare.

From Light and Shade in War by Captain Malcolm Ross and Noel Ross, 1916.

Image top: Limbers lined up on the track leading to north beach, where guns are being taken off prior to the evacuation.

Posted by an extract of reflection at Thursday, December 31, 2015