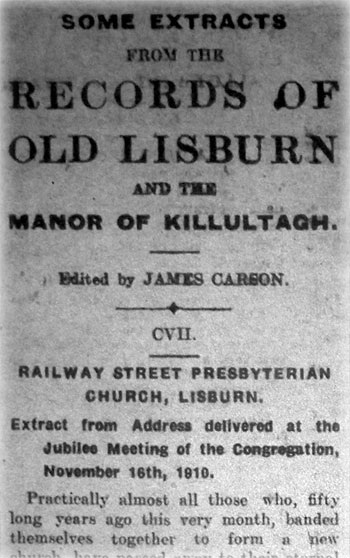 
Extract from Address delivered at the Jubilee Meeting of the Congregation, November 16th, 1910.

Practically almost all those who, fifty long years ago this very month, banded themselves together to form a new church, have passed away to their eternal rest. If we could bridge the years -- those fifty years so full of life and action and change -- and transplant ourselves in vision back to those days of the birth of this church, what should we find? We would see a small but ardent band of men and women, still glowing with fires of the great Revival of 1859, going out from a large and crowded congregation, seeking a place where they might assemble themselves together to worship their God.

Their first place of meeting was in the hall in Castle Street -- granted by the kindness and consideration of Jonathan Richardson, of Killeaton, all honour to his memory. Here for almost three years our forefathers worshipped -- and while in these humble surroundings, and struggling under difficulties and opposition, they give a call in 1861 to the Rev D. J. Clark, the first minister, who for seventeen years faithfully served his church and people, and died in the year 1878.

A permanent building in which to worship was now a first requisite. Pastor and people resolutely set about procuring a suitable site. Here, almost insurmountable difficulties confronted them. Deputations waited on, and influence was brought to bear on the then authority who practically controlled the land of Lisburn. Even Drs. Cook and Morgan intervened on behalf the people. All, however, was of no effect; the fiat had gone forth -- "From Dunmurry to BAllinderry not one foot of ground shall be granted for such a purpose." But Presbyterians are a dour race, and not easily beaten. Thwarted in one direction, the congregation at once turned its attention in another. The present site, fortunately, was in the market, being one of the few sites in the town uncontrolled by the territorial autocrat, and this small and comparatively poor body of men actually purchased at a cost of £350, or £6 5s per foot. On March 29th, 1863, the foundation stone of the new church was laid by John Lyttle, Mayor of Belfast, and the church was completed sufficiently the same year to enable worship to be celebrated theirin. The cost of the building amounted to some £2,000.

During these early years Wm. Barbour, of Hilden, was a tower of strength to the young church. His assistance was practical and personal. As an illustration, when the people were making a special effort to lighten the burden of debt hanging over them, he made the generous offer of that for every pound raised for this purpose he would contribute another; this resulted in a cheque from Mr. Barber for £456.

When Mr. Clarke died in 1876 he left as his monument and the temporal fruits of his ministry the new church, the schools at rere of same, the manse in Railway Street, and the house adjoining. Notwithstanding the strenuous and successful efforts made by Mr. Clarke to lighten the burden of debt on the congregation, there was handed over to his successor liability of some £1,260.

On the 17th March, 1865, John Sloan, junior, was appointed secretary, and George Pelan treasurer. For reasons which do not appear, they only remained in office a few months, when Stewart Sloan was appointed secretary and William Paterson treasurer. In 1870 Alexander Davidson appears as secretary and John Neill treasurer. Mr. Davidson, of his demise, generously left £100 towards church repairs. John D. Hamilton's name appears jointly as secretary with Alexander Davidson from 1873 to 1888, followed by James R. Boyd in 1889, James E. Sloan in 1899, J. L. Rentoul, M.D., 1903, George Duncan, 1906.

In 1875 John M'Clure was appointed treasurer, succeeded by Hugh Shaw, who held the office for twenty years, and the present treasurer, H. G. Larmor, who has acted since 1900.

The Rev J. L. Bigger's pastorate extended over six years -- from October, 1879, till July, 1885. He was a man greatly beloved, and his transference to a professorship in Magee College, Derry, was felt, at the time, as a serious loss to the congregation. At the date of his installation in Railway Street -- 1879 -- he fell heir to congregational debt of £1,260.

when he resigned the charge in 1885 the debt was reduced to £290. During Mr. Bigger's ministry the wall round the church property was built and some other minor improvements made, amounting to £400, so that some £1,400 was raised for reduction of debt and church extension in his time.

The present pastor, the Rev. R. W. Hamilton, M.A., was installed October 8, 1885, coming from Burt congregation, Co. Donegal. The congregation has been in existence for 50 years, and Mr. Hamilton has been in charge for exactly half of that period.

(This article was originally published in the Lisburn Standard on 1 November 1918 as part of a series which ran in that paper each week for several years. The text along with other extracts can be found on my website Eddies Extracts.)

Posted by an extract of reflection at Thursday, November 01, 2012