Christ Church and the UVF in Lisburn 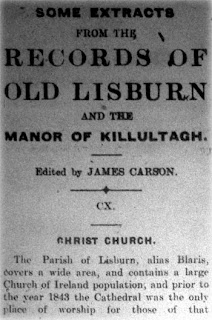 
The Parish of Lisburn, alias Blaris, covers a wide area, and contains a large Church of Ireland population, and prior to the year 1843 the Cathedral was the only place of worship for those of that persuasion.

In the year 1843 it was felt that an additional church was required to provide for the spiritual wants of the people, and accordingly a site was obtained on the Dublin Road and a church was erected as a parochial chapel of ease or district church to the Cathedral, and designated by the name of "Christ's Church, Lisburn."

The first incumbent of Christ Church was the Rev. John Nash Griffin, who was appointed in the year 1842, and continued in the position about three years, when he was succeeded by the Rev. J. Hudson in 1845, but that clergyman remained only a very short time, as the Rev. Hartley Hodson (a former curate of the neighbouring parish of Derriaghy) became incumbent in the year 1846, and continued in charge of the parish for seventeen years -- 1846-1863 -- when the Rev. W. D. Pounden was appointed, and ministered for the long period of twenty-one years -- 1863-1884.

During the incumbency of the Rev. Hartley Hudson a wave of religious fervour spread over the country, especially in Ulster, known as the Revival of 1859, and as an outcome the congregation determined to enlarge the church so as to accommodate the growing number of parishioners, with the result that the two transepts and gallery were erected.

In 1874 the Nicholson aisle was added. A brass tablet commemorating the building was placed in the south side of the aisle, and reads as follows:-- "October31st, 1874. For the glory of God and remembrance of Mrs. Clare Nicholson, long a constant worshipper in this church, and a munificent supporter of its charities this memorial aisle is raised by friends who knew and felt her work. She fell asleep February 17th, 1874. Blessed are the dead which die in the Lord."

Mrs. Nicholson was the mother of Brigadier-General John Nicholson, the victor of Delhi.

In memory of James Bolton, Commander R.N., "one of the earliest and most energetic promoters of the interests of this church." Died 1867, aged 72 years.

In memory of Eliza Matilda, wife of James B. Whitla, of Lisburn, Captain 88th Regiment Connaught Rangers, who died in Manitoba, 1899.

The Nicholson Memorial School, adjoining Christ Church, was built in 1864 by Mrs. Nicholson in memory of her children. Her illustrious son, Brigadier-General John Nicholson, of Indian fame, who fell at Delhi, September 23rd, 1857, aged 34 years, and three of his brothers, all died in India.

On the front of the building is a memorial tablet bearing date 1864:-- "Erected for a Sunday School by Mrs. Nicholson, in memory of her children, James, Alexander, William, John, Lily, Charles."

Inside the school is a tablet:-- "The Nicholson Memorial School House, erected by Mrs. Nicholson in memory of her six children."

or, as it was more generally known, the U.V.F., was actively engaged during 1913 and 1914 in drilling and preparing to resist, if necessary by force, the imposition of Home rule on the Imperial Province. The Lisburn contingent -- 1st Battalion South Antrim Regiment -- was commanded by Adam P. Jenkins -- later Major Jenkins, wounded at Thiepval, and for several months a prisoner in Germany -- and numbered about 800 men. Their drill hall was a large shed in Graham Gardens, now occupied by Messrs. Donaghy as a boot and shoe factory, and afterwards in Sprucefield Mill.

On the night of Friday, April 24, 1914, the "Mountjoy" made Larne harbour and discharged her cargo of rifles and ammunition. Hundreds of motor cars and motor lorries were in readiness, and these distributed the munitions all over Ulster before breakfast-time the next morning.

On Friday evening about 7-30 the mill horns in Lisburn hooted their loudest; at the signal the Volunteers hastily donned their equipment and made for the rendezvous on the Belfast Road, closely followed by the constabulary. E. A. Sinton took command, Major Jenkins having gone earlier in the evening to Larne. The force formed up on the Belfast Road [--?--] "Woodlands," and detachments sent out to Derriaghy, Lambeg, Hilden, and other places in the vicinity, where the men were occupied practically the whole night, with the exception of the officers knowing nothing whatever of the important work in progress on the other side of the town.

About 11 o'clock James Carson, in charge of a small body of specially-picked men, proceeded quietly in the direction of Pond Park, on the Stoneyford Road, having previously despatched men to arranged positions on the Moira Road, at Troopersfield, and at Stoneyford, to await the arrival of the cars from Larne and assist in disposing of the munitions.

The long, anxious night wore through. About five o'clock -- even then there was little sign of the dawn -- far up at a break in the Stoneyford hills the weary watchers at Pond Park saw the reflection of light in the sky, a few moments after the headlights of motor cars came into view, and soon some half-dozen cars, heavily laden, drew alongside. With a sigh of relief the waiting men cried, "Thank God all has gone well," and from the cars, through the crisp morning air, came the cheery reply: "Yes, all has gone well; look out for the Lisburn motors, they are close behind," and away into the ghostly morning light sped the cars on their way to their destination at Dunmurry. Soon afterwards, through the stillness and quiet of the morning, far up the mountain side was heard the thunder of the first heavy Lisburn motor approaching, laden with equipment for almost half a battalion. For a moment only it delayed, while Major Jenkins, who was in charge, delivered a despatch which was at once forwarded by motor cycle to Mr. Sinton on the Belfast Road, instructing him to call in all his outposts and dismiss the battalion. It was only on Saturday evening, when the papers appeared, that the men understood what their night's vigil meant, and that they had been used as a decoy on the Belfast Road.

It was almost an hour after Major Jenkins passed when the second motor arrived in charge of J. C. Gowan.

George Duncan was in charge of a motor conveying munitions to Ballinderry. His experience was rather interesting. They lost their way, and on a lonely byroad reached a hill that the motor, with its heavy load, could not climb. Mr. Duncan and the driver unloaded in the dark at the foot of the hill half the rifles, ran the remainder of the load up to the top, unloaded it there, returned to the foot of the hill for the half they had jettisoned, and after loading up again proceeded cheerfully on their journey.

Mr. C. C. Craig, M.P., afterwards Captain Craig, wounded at Thiepval and for almost two years a prisoner in Germany, tells how when waiting at Ballinderry Corner for the arrival of Mr. Duncan and others he grew anxious as the night wore on. Then just as the first grey of dawn was tinging the sky he saw, far away on the long, straight stretch of road down which the "gun-runners" must come, the headlights of a car, then another, and another, and another, then scores and scores of them, till the long road was covered with moving lights and the air filled with the singing and cheering of men as the cars sped on with their freights for Monaghan, Armagh, Tyrone, and Fermanagh.

The Lisburn rifles were received and hidden away towards the end of April, 1918/ [--?--] June they were taken out of their hiding-places and stored publicly in an armoury, fitted up in a disused church in Antrim Street. This church was situate on the left-hand side of the street, advancing from the railway bridge, a short distance from the end of Bachelors' Walk in the Bow Street direction, with its rere abutting on M'Keown Street. An armed guard was always maintained on the premises. From this time forward the battalion when out marching or drilling drew the guns from the armoury, returning them again at the close of operations. As the days passed matters political became more acute and threatening, and it was believed a final crisis had arrived, when out of the blue, early in August, the thunderclouds of war broke over Europe. The call of Empire did not sound in vain in the ears of the men of Ulster. They were prepared to fight for their homes and rights at home. When the call came they were also prepared to forget past slights, past wrongs, past injustice, and to remember only that the Empire was in danger, and that the flag they loved called to them to come. Within three months after the opening of hostilities the Ulster Volunteer Force had practically ceased to exist. The vast majority of the young and fit had answered the call to arms. Many U.V.F. officers over military age joined up in order to set an example to the men. Only the old and unfit and a small residue of others were left.

The armoury was dismantled and the arms again secreted. In 1918 they were -- well, it is rather soon after the event to say where they are now; that may be left to some future historian to disclose.

(Next week: The Black Ribbon.)

(This article was originally published in the Lisburn Standard on 22 November 1918 as part of a series which ran in that paper each week for several years. The text along with other extracts can be found on my website Eddies Extracts.)

Posted by an extract of reflection at Thursday, November 22, 2012