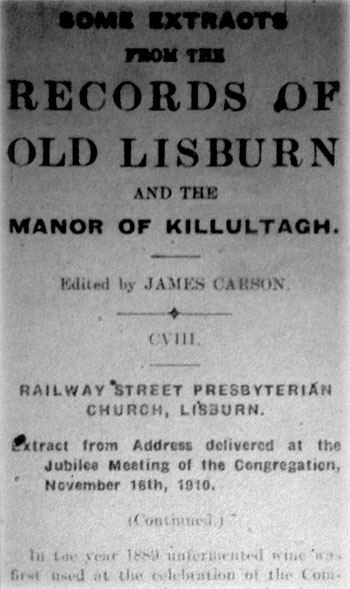 
Extract from Address delivered
at the Jubilee Meeting
of the Congregation,
November 16th, 1910.

In the year 1889 unfermented wine was first used at the celebration of the Communion. In 1894 the name of the church was officially changed from 2nd Lisburn to Railway Street. Instrumental music was introduced into the service of the church, and an organ installed in the year 1908.

The Lecture Hall was built in 1887. Side galleries erected in 1897. In 1900 James E. Sloan generously presented to the congregation a free site for the new manse on the Fore Hill lands. The building of the manse was preceded with and completed at a cost of about £1,400. In 1909 Mr. Sloan made a further grant of land at the rere of the manse for a garden. and, thanks to his and Miss Brownlee's generosity, the congregation now possess a manse and grounds second to none within these bounds of the Church. Numerous valuable bequests have at various times been made to the congregation.

The Brownlee Memorial National School, Wallace Avenue, opened August, 1913, was erected at the cost of some £3,500. Towards this amount the Board of Works made a grant, the Brownlee Trustees paying the balance. The school is under the control of the Church Committee.

The E.M.B. Memorial Hall, Hilden, was erected in 1911 by J. Milne Barbour, D.L., J.P., in memory of his wife, and placed under the care of the congregation.

The organ installed in 1908 proving inadequate, James Crossin, J.P., in 1914 presented the congregation with a new instrument costing some £700.

William Barbour, J.P., Hilden.
"One of the first members and the most munificent contributor to the funds of the church."
Died 1875, aged 78 years.

(This article was originally published in the Lisburn Standard on 8 November 1918 as part of a series which ran in that paper each week for several years. The text along with other extracts can be found on my website Eddies Extracts.)

Posted by an extract of reflection at Thursday, November 08, 2012