Lisburn Banks and Other Notes 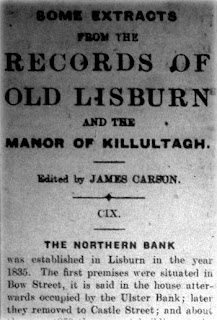 was established in Lisburn in the year 1830. The first premises were situated in Bow Street, it is said in the house afterwards occupied by the Ulster Bank; later they removed to Castle Street; and about the year 1870 the present building at the corner of Railway Street was erected and occupied. The name of the first manager is not now available. H. J. Manley was appointed in 1842, and remained in office till his death in 1875. R. H. Bland only reigned for three years, when he retired in 1878 in order to take up the position of sub-agent on Sir Richard Wallace's (the Hertford) estate. John Preston followed in 1878, and continued to act till his death in 1910, when he was succeeded by William Young, the present manager.

The firms of Robert Stewart &. Sons, Ltd., yarn and thread manufacturers, and George Duncan & Sons, Ltd., drapers, Market Square, were established in 1835, the same year in which the Northern Bank came to Lisburn.

The site on which the bank now stands was for many years occupied by the Hertford Arms Hotel, and on the opposite corner of Railway Street stood Dr. Musgrave's house.

Railway Street was originally known as Jackson's Lane, and it was only after the railway had reached Lisburn in 1839 that it became known by its present name. In those far-off days the only approach to Prospect Hill from the town was through Jackson's Lane, and for long after the of advent of the railway at the end of he street was a level crossing.

King William III., in 1690, on his march to the Boyne, when passing through Lisburn, dined with Duke Schomberg and Captain Johnston in the house of George Gregson, a Quaker, that stood on the present site of the Northern Bank.

opened in Lisburn -- Market Square -- in the year 1865; John E. Morton, manager. Removed to Bow Street premises in 1871. George G. Tew appointed manager in 1876. He emigrated to America in 1887, when his successor, J. H. Vint, was appointed. Mr. Vint was transferred to Donegall Place branch, in Belfast, in 1889, and was succeeded by David Strain. Mr. Strain was transferred to Carlisle Circus branch, Belfast, in 1894, and afterwards to Donegall Place. James Carson was appointed manager in 1894, and on his removal to Omagh branch in 1900 was succeeded by Thomas Malcomson, the present manager. Mr. Malcomson, a native of Lurgan, has spent the whole of his business life in the Lisburn branch of the bank, rising through the various grades to his present position. The new bank premises in Bow Street erected in 1913 at a cost of some £5,000.

The section of the Ulster Railway between Belfast and Lisburn was opened for conveyance of passengers on August 12th, 1839. The first train started from Belfast at 7 o'clock in the morning. Early as the hour was, the extent of public interest was that a very large crowd of people assembled to witness the first starting. At various parts, also, along the line, multitudes were collected, and at Lisburn the train was greeted with enthusiastic cheers by a numerous concourse of people. The section connecting Lisburn with Portadown opened a few years afterwards.

In 1906 the new drainage works and filter beds at New Holland were completed. Prior to this date the drainage of the town passed through the bywash into the canal. This stream passes through the Wallace Park, Railway Station, creases Bachelors' Walk, passes through the Ulster Bank garden, crosses Bow Street quite close to the bank, and then via the Gasworks to the canal. Up to a comparatively modern date the stream was open for almost its whole course. One hundred years ago it was open in Bow Street or Bow Lane, being crossed by a small bridge known as the Sluice Bridge. Harry Munro's mother lived for many years after his execution in 1798, and supported herself by keeping a little shop situated near the Sluice Bridge in Bow Street. In 1796 the Marquis of Hertford built a very good shambles on a small stream -- the bywash -- in Smithfield, where a great number of black cattle were exposed for sale every Tuesday.

may be said to date from the advent of Sir Richard Wallace, as owner of the Hertford estate, in 1872. Under his regime the town prospered, new buildings were erected, and a general improvement in conditions supervened, that has continued to the present day. The whole estate benefited similarly under his generous and liberal sway. The benefits of the Land Purchase Acts were early availed of on the estate, and later the head-rents and town parks were sold to occupiers on terms most advantageous to them. Bachelors' Walk prior to 1872 was only a narrow lane or path connecting Railway Street and Antrim Street, bordered on both sides by trees, the fields between the path and railway being frequently occupied by travelling shows and forms of entertainment. The tent of the evangelist was also often to he seen there.

Wallace Avenue, Clonevin Avenue, and Graham Gardens were opened for traffic about the year 1900.

Wallace Avenue, which connects Railway Street and the Belfast Road, runs through what were the private grounds of Sir Richard Wallace's castle, built in 1880. The castle in 1914 was converted into a Technical School.

C[l]onevin Avenue connects the Magheraleave and Antrim Roads, and was constructed by Mr. Hugh Kirkwood.

Graham Gardens - or as it is also called, Wardsborough Road -- runs from the new Post Office, Railway Street (built in 1894), to Bow Street and Bachelors' Walk. They take their name from the Graham family, owners of the property. Wardsboro' was the name of a cul-de-sac containing a number of small houses opening into Railway Street, close to the Post Office, and was in existence long before the opening of the Gardens and when Railway Street was known as Jackson's Lane. At the Bow Street end of the Gardens there was also a cul-de-sac known as Tan Yard Lane, so called from the ancient tanyard adjoining, belonging to the Beatty family.

Longstone Street, or the Longstone, derives its name from a long stone which stands at the entrance to the Sandy Lane at the upper end of the street.

Bow Street, or, as it was known, Bow Lane, is so called from the semi-circular formation of the street.

The Linen Hall, erected by the first Marquis of Hertford, was located at the junction of Linenhall Street and Smithfield, opposite the lower end of Market Street, and now converted into a butter and egg market.

The Fever Hospital is now the Manor House, opposite Christ Church, on the Dublin Road, occupied by a branch of the Stannus family.

The Cholera Hospital was on a plot of ground on the Antrim Road opposite where the Intermediate School now stands.

Lisburn was originally known as Linsley Garvin or Lisnagarvey -- Gamesters' Mount. It was twice destroyed by fire -- 1641-1707 -- and gradually came to be known as Lisburn. The tradition as to now it received the name of Lisnagarvey runs thus:-- A little to the north-east the town there is a mount, moated about, and another to the south-west. These were formerly surrounded with a great wood, and thither resorted all the Irish outlaws to play at cards and dice. One of the most considerable amongst them, having lost all, even his clothes, went in a passion in the middle of the night to the house of a nobleman in that country, who before had set a considerable sum on his head, and in this mood surrendered himself a prisoner, which the other considering of, pardoned him, and afterwards this town was built, when the knot of these rogues was broken, which was done chiefly by the help of this one man.

Article 70 contains a sketch of his life. His ancestors for several generations resided at Kilcorig, Magheragall. On his decease in 1913 his collection of Irish Books and Pamphlets passed under his will into possession of the Linen Hall Library, Belfast. Between the leaves of an old book was discovered a copy of a memorial, dated 1863, presented by him to the British Government complaining of the treatment he received, when in America, from the officials of the Southern States. Proceeding, he says:--


I shall respectfully request your Lordships' attention to a brief summary of the outrages to which I, in common with several other British subjects, have been exposed in the States of Alabama and Tennessee.


The summary was far from brief, as what is left of it runs to five closely-written pages of large foolscap, interspersed with poetic quotations and other irrelevant matter.

He explained that he sailed from Glasgow for New York in the year 1852, and lived seven years in Brooklyn,


Where, amid inducements to the contrary, I remained true in my allegiance to my country's flag.


The flag that braved a thousand years
The battle and the breeze.


In 1859, on the decease of an only surviving brother, he removed to Montgomery, Alabama, to administer the estate. Mr. Belshaw appears to have settled in Montgomery, as we find him there later in the jewellery and watchmaking business. On the opening of the war several men employed by him received threatening letters and had to leave his employment. He tells how he saw in the public square, in front of his business premises, an alderman of the city burning works of doubtful morality, including several volumes of Spurgeon's sermons. Crowds attacked and entered his premises. All this evidently on account of his British leaning, and also from the fact that it was known he sympathised with the aims of the North. His troubles, however, grew more acute when the conscription law came into force.

In August, 1862, on the advice of Lord Lyons, he and other British subjects took out certificates of British nationality. Soon after he was called up to join the army, but declined to go. When a guard came to his house to arrest him he took refuge at the top of the house, and his sister with a loaded revolver defied the soldiers to follow. The soldiers did not follow, but retired gracefully in face of superior force.

After this he appears to have never been out of trouble with the conscription officers, till finally he was arrested, notwithstanding his certificate of nationality, and, after being detained three days, released. Soon after he was again arrested and dispatched to Camp Watt, where he was detained for a considerable time under very disagreeable conditions. He states that when at Camp Watt he saw conscripts, British subjects, put in chains with iron collars.

(This article was originally published in the Lisburn Standard on 15 November 1918 as part of a series which ran in that paper each week for several years. The text along with other extracts can be found on my website Eddies Extracts.)

Posted by an extract of reflection at Thursday, November 15, 2012