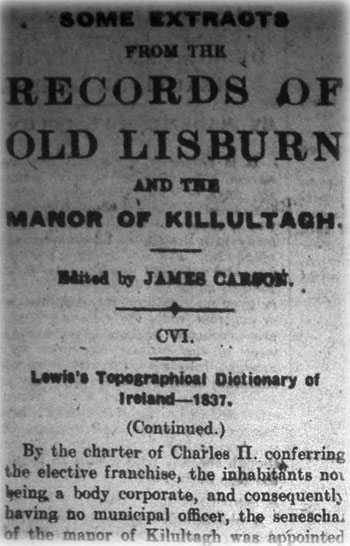 
By the charter of Charles II. conferring the elective franchise, the inhabitants not being a body corporate, and consequently having no municipal officer, the seneschal of the manor of Kilultagh was appointed returning officer for the borough; and the right of election was vested in the inhabitants generally, every potwalloper being entitled to vote; but by an Act of the 35th of Geo. III., cap. 29, it was restricted to the £5 householders, of whom, previously to the late Act for amending the representation, there were only 1411, and of these only 81 were qualified to vote. By the 2nd of William IV., cap. 88, the right of election was confirmed in the £5 householders; and the boundary of the borough, which was very indistinct, was enlarged and clearly defined, and now comprises an area of 1,325 acres, the limits of which are thus minutely described:--


Also the space contained between the River Lagan and the following boundry; (that is to say,)

Also the small island on the River Lagan in which are situated the Vitriol Works.


The number of voters registered up to March 1st, 1836, was 134; the seneschal is still the returning officer. Manorial courts are held by the seneschal every third Wednesday, at which debts to the amount of 40s are recoverable; and there is a court of record, with jurisdiction to the amount of £20 late currency. Courts leet are also held twice in the year, when a leet grand jury is sworn, by whom a petty constable is appointed for each of the 17 constablewicks into which the manor is divided; presentments for payment of salaries, repairs of roads, and other works are made; and all the municipal functions of the borough are exercised. Petty sessions are also held in the town every Tuesday; and here is a station of the constabulary police. A large, and handsome edifice now used as the courthouse of the manor, and for holding the petty sessions and other public meetings, was originally built and supported by Government as a chapel for the Huguenot emigrants, whose descendants having attached themselves to the Established Church, the minister's stipend has been discontinued, and the building appropriated to the above purposes. The manor gaol of the borough, under the custody of the marshal of the manor court, has, since the 7th of George IV., been disused as a place of confinement, and is now used as a place of custody for goods attached by the court till bailed.

The parish, which is also called Blaris, comprises, according to the Ordnance survey, 10,697 statute acres, of which 2,827¼ are in the barony of Upper Massareene, county of Antrim, and 3,064 in Upper Castlereagh, and 4,805¾ in Lower Iveagh, county of Down. The lands are very fertile, and the system of agriculture is highly improved; for the last twenty years, wheat has been the staple crop, and oats, formerly the principal produce, are now grown only for the sake of the due rotation of crops. The Maze racecourse is in this parish. The surrounding scenery is enlivened by numerous gentlemen's seats, among which are Ballymacash, the residence of Edw. Johnson, Esq.; Brookhill, of James Watson, Esq.; Larchfield, of Wm. Mussenden, Esq.; Lambeg House, of Robert Williamson, Esq.; Seymour Hill, of Wm. Charley, Esq.; Chrome Hill, of Richard Niven, Esq.; Ingram Lodge, of J. Richardson, Esq.; Suffolk, of the late J. M'Cance, Esq.; and Colin, of Matthew Roberts, Esq.; besides many other, elegant houses near the town. The living is a rectory, in the diocese of Connor, and in the patronage of the Marquess of Hertford. The tithes amount to £700; there is a glebe-house but no glebe attached to the living. The church is a spacious and handsome building, with a tower, to which an octagonal spire was added in 1807, at the expense of the late Marquess of Hertford; a fine organ has been presented to it by the present Marquess; and in its improvement considerable sums have been expended, including a recent grant of £256 from the Ecclesiastical Commissioners. It contains a handsome monument to Lieut. Dobbs, a native of the town, who was killed in an engagement with Paul Jones off this coast; and an elegant monument has recently been erected at the expense of the bishop and clergy of the diocese to the memory of the celebrated Dr. Jeremy Taylor, Bishop of Down and Connor, who died here in 1667, and was buried in a vault in the church of Dromore, which he had built. In the churchyard are several monuments to many of the Huguenots who settled here under the patronage of William III. and Queen Anne. It is the cathedral church of the united dioceses of Down and Connor; the visitations are held in it, and all the business belonging to the see transacted in the town. There are no chapels of ease within the pariah, but divine service is performed in the schoolhouses of Newport, Mace, and Broomhedge, in rotation. In the R.C. divisions the parish is the head of a union or district, also called Blaris, comprising the parishes of Lisburn and Hillsborough, in each of which is a chapel. There is a meeting-house for Presbyterians of the Synod of Ulster, of the first class, also two for Wesleyan Methodists, and one for the Society of Friends.

To the north of the town is the Ulster Provincial School for the Society of Friends, founded in 1794 by Mr. John Handcock, who bequeathed a sum of money for the erection of the premises; 50 children, who are eligible at eight years of age and remain till fourteen, are awarded, clothed, educated, and apprenticed; each scholar pays £3 12s per annum, and the remainder of the expense, which averages about £14 per annum each, is defrayed by contributions from the Society. A free school for boys was founded in 1810, and aided by the Association for Discountenancing Vice; and there is a similar school for girls, built and supported by subscription: the late George Whitla, Esq., bequeathed £100 to each, the interest of which is applied in procuring clothing for some of the poorest children. There are also two other schools for both sexes, one of which is aided by the same Society, and the other is supported by subscription. An infants' school, also supported by subscription, was established in 1832, and a building was erected for its use at an expense of £120, towards defraying which the Marquess of Hertford contributed £50. The number of boys on the books of these schools is about 400, and of girls 300; and in the private pay schools are about 360 boys and 245 girls. An almshouse for eight poor women was founded under the will of Mr. Williams, in 1826; and six almshouses, for as many poor widows, were also founded by a member of the Trail family, and are now wholly supported by William Trail, Esq.; they were rebuilt on a more convenient site in 1830, at the expense of the Marquess of Hertford. The several charitable bequests amount in the aggregate to £2,750, invested in Government securities; the interest of which sum is distributed in winter among the poor, according to the wills of the respective donors. A Humane Society for the restoration of suspended animation has been established here; and in an airy part of the town is situated the County Infirmary, supported equally by subscriptions and grand jury presentments. On the White Mountain, about two miles to the north of the town, are the ruins of Castle Robin, erected by Sir Robert Norton in the reign of Elizabeth; the walls now remaining are 84 feet long, 36 feet wide, and 40 feet high, and near them is a large mount. Among the distinguished individuals, born here may he noticed Dr. Edw. Smith, Bishop of Down and Connor, in 1665. Lisburn confers the titles of Earl and Viscount on the family of Vaughan.

(This article was originally published in the Lisburn Standard on 25 October 1918 as part of a series which ran in that paper each week for several years. The text along with other extracts can be found on my website Eddies Extracts.)

Posted by an extract of reflection at Thursday, October 25, 2012