Historical Notices of Old Belfast and its Vicinity (pt2) 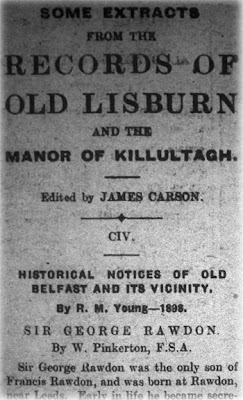 Sir George Rawdon was the only son of Francis Rawdon, and was born at Rawdon, near Leeds. Early in life he became secretary to Edward Lord Conway, principal Secretary of State, and by him he was employed as an agent on his Irish estates. In 1639 he was member of Parliament for the town of Belfast, and in November, 1641; being major of Lord Conway's regiment of horse, he successfully defended the town of Lisnegarvey, or Lisburn, against Phelim O'Neill and 8,000 Irish rebels. After serving with distinction during the war of the Rebellion, when Ireland was completely subdued by the Parliament, he took office under it as one of the Commissioners of Revenue of Ulster, and in that capacity he was exceedingly useful in reducing, as far as he could, the Parliamentary Composition imposed upon Lord Conway's estate.

A great number of very interesting letters of his to Lord Conway are in the Record Office. After Cromwell died he prudently turned towards the rising sun of the Restoration, and in 1660 he was appointed one of the Commissioners for executing His Majesty's Declaration for the Settlement of Ireland. In 1665 he was created a baronet of England, under the title of Moira, in the County of Down. Not a syllable of his service to the usurpers is hinted in the accurate peerage book of Lodge, but it says that "as he had the strongest disposition to be as useful as possible to his country, so he had an ample fortune which enabled him to show it, whereby he gained the greatest respect and esteem."

He does not seem to have been so lucky under the Protectorate as his brother Commissioner, Colonel Hill; though he performed his duty well and ably, he does not appear to have received any more than the mere salary of his office. But at the Restoration he received many grants under the different Acts of Settlement, in the counties of Down, Dublin, Louth, and Meath; and for the sum of £200 he was allowed to pass patent of 2,078 acres in the barony of Upper Iveagh, in the County of Down. It is thus set forth in the patent of date 1681: "King James I., out of his great desire and care to plant the province of Ulster, was graciously pleased, in the eighth year of his reign, to grant letters patent, under the great seal of Ireland, for the passing of all the lands lying within the country, then commonly known by the name of Iveagh, and for the dividing, settling, and planting thereof, to several freeholders of the Irish nation, in hopes the said lands might thereby be manured, and better inhabited; and did, among other grants, pass by letters patent, bearing date the same year, fourteen sessioughs, or half towns, within the territory of Moira, in the country of Iveagh, to Murtagh Mac-Terlagh O'Lavery of Moira; but notwithstanding that he and his grandson, Hugh O'Lavery, enjoyed the same, yet neither of them made any considerable plantation thereupon; and in 1639, Hugh conveyed a great part thereof to several persons, and in 1641 forfeited the rest by rebellion, which, by the commissioners of claims for satisfaction of arrears to pay to officers and soldiers, were sold (as above) to Sir George Rawdon; being a person that had performed very loyal and acceptable services to the crown, and had bestowed much costs and pains to improve and plant the said lands, had built a market town thereupon at Moira, which was inhabited with conformable Protestants, and having been decreed to, and purchased many other lands, they were erected, at his suit, into the manor of Moira, where he had obtained a licence, in 1669, to hold a Thursday market, and four yearly fairs on the Thursdays in Easter week, after 24th of June, after the 1st of August, and after the 29th of September. -- And whereas he has purchased divers towns and lands in the territory of Kinelearty, within the said county, and for that some of these lands were mountainous, and others much encumbered with rocks, underwoods, and begs, whereby the Irish in the rebellion, and thieves and tories, did in former times frequently harbour there; and that of late, those lands, by his care and cost, were become well inhabited and planted, he having built two mills there, put the parish church in repair, erected a considerable town, and in the middle thereof had set out a large market place, which was paved, and made fit for market and fairs to be held there, and which new-built town was situate in the very centre of the county; the king therefore created the premises into the manor of Kinelearty, with a demesne of one thousand acres -- liberty to empark the like quantity; to keep courts, appoint seneschals, hold a Thursday market, and two fairs at the town of Ballinahinch on first February and twenty-ninth of June, to continue three days each, and many other privileges."

He died in the eightieth year of his age, in August, 1684, and was buried with great magnificence at Lisburn. Sir John Rawdon, the fourth baronet, and great grandson of Sir George, was in 1750 advanced to the peerage by the style and title of Baron Rawdon of Moira; and he was further advanced to the dignity of Earl of Moira in 1762.

In the print room of the British Museum is a small engraving of Sir George Rawdon, with the following inscription:-- "The true and lively pourtraiture of that valiant man and worthy patriot and captaine, Sir George Rawdon, knight and barronet."

EXTRACTS OF LETTERS OF GEORGE RAWDON, 1666.

"Another sad fate is befallen in the North. I believe the one half of the cattle in Antrim and Down are dead of the murrain; corn double the price it was a month past, and no milk."

He writes-- "I had letters today from my wife, who is well, with all the children. The great race at Lambeg for the plate was run the last week by the Earl of Donegall's Barb, Will Hall's Blink, and Major Richardson's Wingfield, who came first and the Barb next and Blink last; the Lo. Massareene was there, but did not put in his horse Tangier."

"I gave your Lordship notice in my last of the great mutiny, or rather rebellion of the garrison at Carrickfergus, which my Lord Lieutenant apprehended to be of such dangerous example that he on the sudden took a resolution to come himself in person to reduce the mutineers, and shipped away 400 of the Royal Regiment with the Earl of Arran and Sir Wm. Flower, which had so quick a passage by sea that they were at Carrickfergus before his Grace reached Hillsborough by land. He came the first night to Dundalk, and on Sunday evening last to Hillsborough, being his second day. As we were ready for church, Will Hill, who rode all night, came to me and told me the news; so I made what preparation I could in 3 hours' time, and met his Grace at Dromore with full 200 horse of our neighbours, which were many of them well mounted, and being orderly drawn up made a great show, and were very much spoken of by the company, and his Grace has since often mentioned them, and asked me if they were Killulta men."

AN ANXIOUS NIGHT AT LISBURN.

(From Benn's History of Belfast.)


I likeways received a tetter from the Bishop of Down and Connor and the Magistrates of Lisburn, requesting that a party should be sent there immediate for the preservation of that town, as they expected the Hearts of Steel this night. I sent all the men of our regiment that I could, so that only one company of the 53rd remains in this town.

Origin and Characteristics of the People in the Counties of Down and Antrim is the title of a pamplet of some twelve pages by A. Hume, LL.D., 1874. An extract from the Ulster Journal of Archæology which appeared in article 89 is by the same author, and covered much the same ground.

Henry Bell, The Grove Cottage, Lambeg, published in 1653 a little volume of thirty pages on Ram's Island and vicinity. It contains a few poems and notes, and the music of the old Irish air "Bonny Portmore."

Pilson's History of Belfast and Annals of the County Antrim, 1846, embraces numerous references to Lisburn and vicinity.

The Book of Antrim, by G. H. Bassett, 1888, runs to over 400 pages, and is a Manual and Directory for Merchants, Professional Men, Farmers, and Sportsmen. Thirty-six pages are devoted to Lisburn, including a directory of the inhabitants, an historical sketch, and an account of the foundation and history of Wm. Barbour & Sons, Robert Stewart & Sons, Island Spinning Co., and J. N. Richardson, Sons & Owden.


(This article was originally published in the Lisburn Standard on 11 October 1918 as part of a series which ran in that paper each week for several years. The text along with other extracts can be found on my website Eddies Extracts.)

Posted by an extract of reflection at Thursday, October 11, 2012