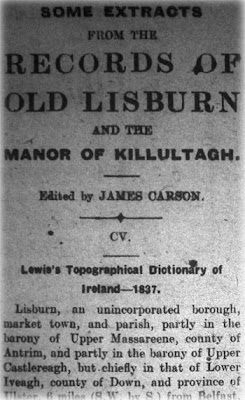 
Lisburn, an unincorporated borough, market town, and parish, partly in the barony of Upper Massareene, county of Antrim, and partly in the barony of Upper Castlereagh, but chiefly in that of Lower Iveagh, county of Down, and province of Ulster, 6 miles (S.W. by S.) from Belfast, and 73 (N.) from Dublin; containing 13,249 inhabitants, of which number 5,218 are in the borough, 5,941 in that part of the parish which is in the county of Down, and 2,090 in that which is in the county of Antrim. This place was, in the reign of James I. and long after, called Lisnegarvey; and though now a populous and flourishing town, it was at that time a very inconsiderable village. Its rapid increase in population and importance may be attributed to Edward, Viscount Conway, to whom, in 1627, Charles I. granted the remainder of the manor of Kiltultagh (a portion of which had been previously given by James I. to his ancestor, Sir Fulk Conway), who, on obtaining possession of this grant, built a castle here, which became the head of the manor. The same grant conferred the privileges of courts leet and baron, view of frank pledge, manorial courts for debts not exceeding £2, a court of record every three weeks for sums not exceeding £20, a weekly market, and two annual fairs. Soon after the erection of the castle, some English and Welsh families were induced by the proprietor to settle here, and a town consisting of more than fifty houses soon arose. On the breaking out of the war in 1641, a body of 1,000 men assembled and preserved the town for some time from the attempts of the insurgents, and held their detached parties in check; but on the 28th November in that year, the garrison consisting only of five newly-raised companies and Lord Conway's troop of horse, the insurgent army commanded by Sir Phelim O'Nial, Sir Conn Magennis, and General Plunket, on their march to Carrickfergus, advanced to attack the town. Sir Arthur Tyringham, however, arriving with a small reinforcement, and being aided by Sir George Rawdon, repulsed the columns of the enemy as they successively advanced to the assault, and by a galling fire from the streets committed great slaughter among them. At nightfall further reinforcements arrived from Carrickfergus and Belfast; and the insurgents despairing of success, set fire to the town, which in a few hours was reduced to ashes; a sanguinary conflict being maintained in the burning town till nearly midnight, when the insurgents were finally put to flight, leaving behind them a number of slain equal to three times the entire number of the garrison, of whom only from 20 to 30 were killed. In 1644 General Monroe made an attempt to obtain possession of the town, but was frustrated by the vigilance and resolution of the garrison; and on the 6th of December, 1648, that general, with the Scottish forces under his command, was signally defeated on the plains of "Lisnegarvey" by Col. Venables and Sir Charles Coote, two of Cromwell's commanders, to the former of whom the castle was surrendered in 1650. On the landing of the Duke of Schomberg, near Bangor, in 1689, a considerable body of forces in the interest of James II. assembled at this place, but afterwards abandoned it without any attempt for its defence, and William III. passed through the town shortly before the battle of the Boyne. Charles II., to reward the fidelity of the inhabitants to his father and to himself, had erected the church of Lisburn into a cathedral for the united dioceses of Down and Connor, and had granted the townsmen the privilege of sending two representatives to the Irish Parliament; but what more especially contributed to the improvement and commercial importance of the town was the settlement here, after the revocation of the edict of Nantz, of many Huguenot families, who introduced the manufacture of linen, and brought with them improved machinery from Holland. The skill and industry of these new settlers were liberally encouraged by the Government, which granted large sums of money for the erection of suitable buildings for carrying on the manufactures, etc., and, by giving an example to others engaged in the same trade, soon raised the quality of the manufactures to a degree of excellence previously unknown. In 1707 the town and castle were burned to the ground; the latter has never been rebuilt, but the present town soon arose from the ruins of the former, and gradually increased in extent; it has been greatly improved at various times, and especially within the last few years by the spirited exertions of the agent of the Marquess of Hertford, who is owner in fee of the whole town, and of a considerable part of the surrounding country; and it is now one of the handsomest inland towns in the province of Ulster.

The town is situated on the north-western bank of the river Lagan, which separates the counties of Antrim and Down, and on the high road from Dublin to Belfast. It consists principally of one long irregular line of street, extending nearly from east to west, from which several smaller streets branch off; and contains, according to the last census, 992 houses, of which 675 are roofed with slate, and the remainder with thatch; all the houses in the principal streets are well built; and amply supplied with excellent water conveyed by pipes from works in the neighbourhood. The great terrace of the castle, which is still remaining, has been made an agreeable promenade; it is sheltered from the north by Castle Street, and is kept in the best order at the expense of Marquess of Hertford. On the opposite side of the river is a small suburb, not included in the ancient limits of the borough, but within the parish and the new electoral boundaries. A new line of road has been made at a great expense at the entrance from Dublin on the southwest, and also at the entrance from Belfast and Armagh, by which the town has been much improved. The manufacture of linens and cambrics, which are sold in their brown state every market day at the linen-hall, a neat and commodious building erected for the purpose, is still carried on to a considerable extent, and maintains its high reputation for the superior quality of these articles; and the diapers and damasks of this place have long been distinguished for their unrivalled beauty of pattern and fineness of texture. On a small island in the river Lagan are extensive chymical works for the preparation of acids, chlorides, etc., for the supply of the several bleachyards, of which some of the largest in the kingdom are adjacent to the town, the principal being at Lambeg, Colin, Seymour Hill, Suffolk, and Chrome Hill, where 189,000 pieces are annually bleached and finished, principally for the London market. There are also extensive establishments for the printing, bleaching, and dyeing of muslins; and near the town are an extensive thread manufactory and a large flour-mill. The trade is much facilitated by the Lagan navigation between Lough Neagh and Belfast, which joins the river Lagan a little above the town, by which, with the aid of several collateral cuts, the navigation is continued to Belfast. The market is on Tuesday, and is the largest and best in this part of the country for every description of provisions; it is also much frequented on account of the quantities of linen and other articles which, in addition to its supply of provisions, are brought for sale; there is a cattle market on the same day. The fairs are annually held on July 21st and October 5th, and are chiefly for horses, cattle, sheep, lambs, and pigs, of which the supply is very large. The markethouse is a handsome building surmounted by a cupola, and, in addition to the accommodation it affords to the market, contains a suite of assembly-rooms. There are also very extensive shambles, corn stores, sheds, and weigh-houses, erected by the proprietor of the town, and well-enclosed market-places for cattle, sheep, and pigs.

(This article was originally published in the Lisburn Standard on 18 October 1918 as part of a series which ran in that paper each week for several years. The text along with other extracts can be found on my website Eddies Extracts.)

Posted by an extract of reflection at Thursday, October 18, 2012