Historical Notices of Old Belfast and its Vicinity 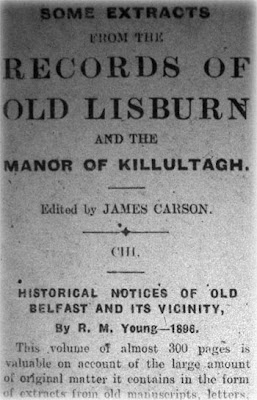 This volume of almost 300 pages is valuable on account of the large amount of original matter it contains in the form of extracts from old manuscripts, letters, state papers, etc. Monro's raid on Newry, 1643, is given, and frequent reference is made to warlike incursions and excursions in the neighbourhood of Lisnagarvey and Killultagh. Monro commanded the Scottish forces in Ireland for the King.


The 26 September, 1643, was appointed for the meeting of all the forces at Lisnagarvey. This was in preparation for the raid on Newry. The following year Lisnagarvey would appear to have been occupied by the forces of the Parliament, and Monroe was denied admittance. He marched from Belfast and made an attempt to capture the town of Lisnagarvey, but finding that garrison on its guard, he demanded a conference with Lieut.Colonel Jones, then commanding there. Being firmly refused admittance except by main force, he first blustered about his authority from England, then threatened to seize all their cattle; but at last, cooling down, his satirically wished the garrison joy of their determination and marched back to Belfast.

We went together towards Lisburn. About 2 or 3 miles from Lurgan is a village called Maherlin, were liveth the Bp. of Dromore. Here I stoped to a visit to my old tutor, Mr. Redmond, who lives with his Uncle Cuppaidge, Minister of the Place. From hence I followed 'em, and passed by Moyragh, a fine seat belonging to Sir Arthur Royden's Family, Leaving Warrenston and Hillsborough to the Right, taro' the fine Improved County of Down, which, with Ardmagh, are the finest Counties in the North, to Lisburn. Here we designed to have waited on the Bp. of Down, who lives within a small mile to the Town; but he being not at home, we spent our time in viewing the Miserable Ruines of the late fire which happened here, and not a house in the Town Escaped. If the story of the Phœnix be ever true, sure 'tis in this Town. For here you see one of the beautifullest Towns perhaps in the 3 kingdoms -- all Brick houses, slated, of one highness, all new, and almost finished, rising from the most terrible Rubish that can be Imagined. When I stood in the Church Yard, I thought I never had seen so dreadful Scene before, all around me the church burnt to the Ground, The tombstones all cracked with the fire, Vast Trees that stood round the Church Yard Burnt to Trunks. Lord Conway (to whom this town belongs) -- his House, tho' at a distance from all the rest in the Town, burnt to Ashes and all his Gardens in the same condition, with the Trees in the Church Yard. 'Tis scarcely conceivable such dismall Effects should arise from so small cause and in so short a time as they relate. Only Some Turf Ashes thrown on a Dunghill, which a brisk wind blowing towards the Town Raised and threw on the Shingles of the next house, which, being like Spunk, by a long Drought of Weather which had then happened, took fire, and the Wind continuing what it had begun, the whole Town, and half an hour, was irrevocably in Flames, insomuch that this accident happening whilst they were at Church on a Sunday morning, buy 4 the fire was extinguished, And not a house and a few of their Goods Remained on being. Its Rise is likely to be as sudden as its fall. Lord Conway has renewed all the Leases, for a year or two, Rent free; gives them as much Wood as they please to cut of his own Woods, which are near, and obliges them to build Regular, so that of the story of the Phœnix can ever be true, sure 'tis in this Town. This Town was formerly the greatest Linnen manufactory of the North before the Fire; now much removed to Lurgan and other adjacent places. However, I do not doubt but when 'tis quite rebuilt, 'twil be rather in a more thriving condition before. From hence we went on seven miles to Belfast, thro' a Countrey, all the way from Ardmagh, Extreamly pleasant, well Improved, and Inhabited by English.

DIARY OF COLONEL THOMAS BELLINGHAM, WHEN AT BELFAST, JUNE, 1690.

Some rain. I came to Lisburn. Waited on Major-General Kirk. Was with Duke Schomberg, who was very obliging. I dined with the Earl of Meath, and came to Jo Whites.

Much rain. I went to Magheralin. Heard Mr. Cubbidge preach. Dined at his house with the Colonel of the Brandenburgh Regiment, and was after, with Major Williams and Captain Brereton, at Mrs. Kelly's. Lord Drogheda passed by.

Several showers. Some Quakers came to see me. I walked in the afternoon to Moira. Saw Sir Arthur Rawden's house, and walked with Captain Ross to the Conservatory. The house and much of the ground are well preserved.

A fair day. I went to the mill. In the afternoon I went to Dromore, and was treated by Captain Brereton.

A fair morning. Some showers in the afternoon. I went to Lisburn, waited on M. G. Kirk, delivered him his letter, dined with Mr. Aleway, and was with the Duke. Some French horse came in.

A fair day. I went to Lisburn, but the Duke was gone to Belfast, thinking to meet the King, but returned. I came with Captain Powell, and stayed some time with Mr. Moore at Hillsborough, which is preparing for the Kings reception. At night there were several bonfires, believing the King had landed, but it was a false alarm. Several regiments are on their march South, General Douglas commanding.

Very hot. They went to Moira. Saw Jewell's regiment of horse, which is a very good one, but the Danish Regiment of Guards is the best I ever saw. They wear an orange-coloured uniform faced with crimson velvet.

Very great showers. I went to Hillsborough. Saw the King and drank of his wine. I was with Lord Meath and Mr. Aleway at their tent, and brought Hunter the Quaker's wife behind me home.


(This article was originally published in the Lisburn Standard on 4 October 1918 as part of a series which ran in that paper each week for several years. The text along with other extracts can be found on my website Eddies Extracts.)

Posted by an extract of reflection at Thursday, October 04, 2012