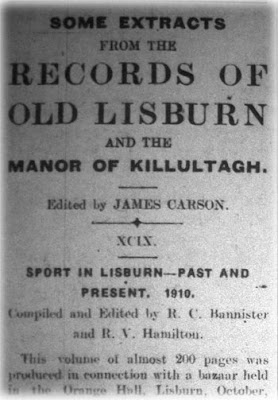 This volume of almost 200 pages was produced in connection with a bazaar held in the Orange Hall, Lisburn, October, 1910, in aid of the Funds of the Cricket, Lawn Tennis, and Hockey Clubs. It contains fourteen good illustrations, and a considerable amount of interesting amount of interesting regarding cricket, golf, Rugby and Association football, hockey, athletics, lawn tennis, lacrosse, bowls, hunting, angling, chess, &c., as practised in Lisburn.

Our primary object in compiling this work was to raise money for a stall in connection with "Ye Grande Athletic Bazaare." We also wished to produce a volume dealing with sport in Lisburn which would be a companion to the General History published some years ago under the editorship of Mr. W. J. Greene.

We readily acknowledge the valuable information supplied from outside sources, as a result of which ours has largely been a task of arranging the material. Had such help not been given most generously and unsparingly by many "old sports" the book would never have been even so complete as it is. We have, thanks to the courtesy of the present officials, had access to the old minute books of most of the local clubs. We are also indebted to the proprietor of the "Lisburn Standard" for the files of his paper. But such records in the hands of strangers give but meagre information compared with the recollections of "the Boys of the Old Brigade," and it is of these latter we are glad to say that our book is mainly composed.

In regard to the article on Cricket, we are indebted to Messrs. R. Bannister, M. Lyons, Joseph Stevenson, F. Williamson, Rev. J. I. Peacocke, and J. Beattie.

In Rugby, our chief debt is to Mr. Arthur Williamson as regards the earlier club, and indeed we may say here that almost every member of the old Cup team of '88 with whom we corresponded displayed the greatest interest and enthusiasm in our attempt to create a permanent memento of Lisburn sport. As to the later club, Mr. William Mussen is our chief collaborator.

In Hockey, to Messrs. E. T. S. Wilson, T. L. Price, D. Stevenson, and H. Mulholland, for the Lisburn Club; and to "Homester" of the "Standard*' for the Lisnagarvey Club.

In Lacrosse, to Mr. H. Mulholland.

In Bowls and Quoits, to Dr. Magill and Mr. R Bannister.

In Hunting, to Mr. James Davidson, well-known in hunting circles as "Nimrod;" and to Mr. G. H. Clarke, one who has been long identified with this branch of sport.

In Athletics, to Messrs. R. Bannister, A. Williamson, J. Hughes, J. Dorman, and W. H. Oliver; also to many runners of the old days.

Cricket in Lisburn dates back to 1836. The club's first ground was in a field off the Ballinderry Road; afterwards a new ground was found on the Low Road, in a portion of the fields now surrounding the Fort House; and subsequently play was in a field at the junction of the Belfast and Derriaghy Roads, about where the eastern lodge of the Park now stands. The present ground was entered on in the year 1854, and the great changes to be made and difficulties to be overcome in rearranging, draining, and laying out the ground were successfully carried out largely owing to the support and help given by the sons of the late Dean Stannus and others.

A stream ran through the middle of the present field from east to west; this was turned out of its course to the north side of the field, where it now runs in a covered drain until it emerges again at the Railway Walk. The ground prior to this was used as a townpark grazing by Mr. John Finlay, who rented it from the Estate Office.

Walking from Market Square down Railway Street, in the year 1854, we have on our left Lennon's hotel and posting establishment, where now the Northern Bank is built; and on the right, opposite, Dr. Musgrave's dwelling-house and yard, with his dispensary shop in Castle Street. Further down on the right we come to the Police Barrack, afterwards the Post Office, and now a dispensary.

Passing on, we come to Kelly's yard, house, and garden. This yard was bounded at the back by a fine row of very tall yew trees, and the garden hedge in Railway Street was adorned with a row of the most artistic productions, in thorns, in the shape of cocks, hens, and other productions inside the range of the hedge shears. The Orange Hall now stands on a part of the space of this old garden. The only other house on this side was occupied by W. J. Knox, plumber, his garden extending to a stone wall which fenced the Dean's meadow, right down to the railway crossing. Coming down the street, on the left we pass the Friends' Meetinghouse and burial-ground, and Wardsboro, now the site of the Post Office, and then we come to a bit of old Lisburn, when Railway Street was Jackson's Lane. Three or four thatched houses with two steps up to a narrow terrace before getting to the level of the doorway. These were taken down to make room for Second Lisburn Presbyterian Church. From this until Armstrong's old wall is reached a hedge bordered the street, enclosing orchards; and passing to Bachelors' Walk we see a long avenue of large trees running down both sides its entire length, and a high wall with tower upon it protecting Graham's and other gardens on the south side, while a deep stream and hedge bordered the north side of this fine thoroughfare. The level crossing is reached, the gates are open, and we now cross over and reach the Dean's Walk. Before us, northward, rise two roads -- Pennington's Hill and School Ann Hill; the latter closed to the public, and overlooked by gatekeeper's house to the right. On walking along the Dean's Walk for about one hundred yards, we stop, turn southward, and coming to the end of Waring's field, we mount a ditch, pass the turnstile at its summit, and keeping along the pathway we arrive at a number of steps, up which we climb, and now find ourselves overlooking the Lisburn Cricket Ground.

The Lisburn Cricket Club was in the fifties one of the leading clubs in Ulster, and acknowledged at that time no superior. The N.I.C.C. was its principal rival. Later, in the sixties and seventies, Belfast, Armagh, Waringstown, and Comber furnished elevens equal to Lisburn's best.

A crisis in the history of the club occurred in 1884, just prior to the Wallace Park being handed over to the town. Some misunderstanding having arisen in the matter of the terms of Sir Richard Wallace's offer, caused a great divergence of opinion in Lisburn, and some of the Town Council of that day were in favour of voting a refusal to accept the gift of the Park unless the cricket field was included.

Sir Richard Wallace was petitioned. His agent, Mr. Capron, waited on by deputation in London, and every legitimate means was employed to influence opinion and retain the ground. The four granite boundary stones show how successful these efforts were, and to-day the wisdom of excluding the cricket ground is almost universally admitted.

For many years no protection from weather existed on the field but the trees. Only during matches was a tent used. Later a small house was built on the North side of the field, which remained till 1885. The present pavilion was designed by Mr. Geo. Sands and built by Mr. Aaron Sinclair. It was improved and enlarged somewhat in 1887, and repairs have been made of later date.

A goodly number of the players of the past decade were still available, and these, with the addition of A. D. White, Woods, Irvine, Stevenson, M'Comb, H. Stevenson, H. and H. W. Major, Mearns, Hull, Bullick, Ffennell, Alister, and J. Hale, maintained the club's reputation in 1896.

(This article was originally published in the Lisburn Standard on 6 September 1918 as part of a series which ran in that paper each week for several years. The text along with other extracts can be found on my website Eddies Extracts.)

Posted by an extract of reflection at Thursday, September 06, 2012