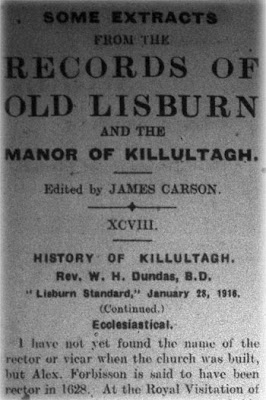 I have not yet found the name of the rector or vicar when the church was built, put Alex. Forbisson is said to have been rector in 1628. At the Royal Visitation of 1633 Chambers is given as curate (probably William, who was appointed vicar of Magheragall in 1635), and in 1637 James Hamilton was made rector. He lived in the troubled times when the Covenant was being forced on the people; and, according to Adair, a Presbyterian writer of the time, he with another "gave the greatest trouble to the Presbytery, as they obstinately adhered to their former courses and denied the Covenant and the authority of the Presbytery. Upon which these hirelings were suspended and thereafter restrained from the exercise of the ministry." The Cathedral register bears Silent testimony to this fact. It contains no entries of baptisms from December, 1646, to 1664. Hamilton was described in 1647 as "deprived by the Presbytery and lurking where he can be entertained" (List of Clergy of the Province of Armagh, Carte Papers). Rawdon said in 1657 that "Mr. Hamilton, who was presented to Blaris, is still alive, but doth not much look after it. I do not know what he may do."

In 1651 the Parliamentary Commissioners sent one Andrew Wyke, an Anabaptist, to preach the Gospel in the North. Adair, who with other Presbyterian ministers had a controversy with him at Antrim, describes him as void of human learning, never educated that way, but a tradesman and imprudent. However, he seems to have made a good impression in Lisnagarvy at first. "The Commissioners,"
writes Rawdon, "have sent us a rare minister, one Mr. Wyke, a most powerful preacher, so that the congregation at Lisnagarvy is very great and look upon it as a great mercy and providence." Wyke was a prime favourite with the Government, which looked after his interests well. When he first came the Privy Council wrote that he was to have a piece of land so that he could keep a horse and some cows, as an encouragement to other ministers and a provision for his family in case of death. Nest year he got £200 to build a house and 100 acres for a dairy and to provide corn for his family. In 1654 he obtained a portion of the lands of Dromore, not exceeding 100 acres, with a lease for seven years. In 1657 he was in receipt of a salary of £150 and the tithes of Blaris, Lambeg, and Derriaghy, and he had the tithes of Magheragall from 1651 to 1655. This was no bad provision for "a man of meek spirit," as the Commissioners described him. However, Mistress Dorothy Rawdon took a strong dislike to him. She wrote to her brother soon after her marriage in 1654 -- "We are arrived (at Hillsborough) anxious to get to our final destination at Lisnegarvy, which is not yet finished. We shall have to live in one end of it until it is finished. There is nothing I dislike here but Mr. Wilkes, whom I never can like. You would very much oblige me if you sent a good minister here, as it is hard to live by such a one as he." Her first impression may not have been far wrong, for Rawdon says neat year -- "Unless Mr. Wyke will do punctual duties besides preaching I do not see how he could be called by the people and presented by the patron." I fear there was no improvement, because in 1658 Rawdon kept the tithes of Lisnegarvy from him, and petitioned that they might go towards building a free school in the town. "Wkye went up with the Lord Chief Baron, but prevailed not, and now does not much account he can stay at Lisnegarvy." In 1658 he was moved to the united parishes of Donaghcloney and Tullylish, but next year the English inhabitants of Magheralin parish petitioned that he might be appointed their minister. We catch a last glimpse of Andrew Wyke in 1663 under changed circumstances; he with other Independent and Presbyterian ministers was put under guard at Carrickfergus for supposed complicity in Blood's Plot; and there we must leave him.

In 1662 Charles II. raised the church to the dignity of the Cathedral Church of Down and Connor, as a recognition of their loyalty. A letter from Rawdon to Conway in 1664 refers to difficulties which had arisen in this connection -- "It will, I think, be very hard to effect this Cathedral work, for I have received a letter last post from my Lord Primate, who says he finds this is not an age to build cathedrals since it is so hard a matter to get one removed; that the judges upon second consideration were of the opinion that the doing of it by bill was a diminution of the King's prerogative, and what they cannot do may be done by a short bill after. Lord Massereene, moreover, is in hopes if the bill passes of having something inserted for his benefit, he being tenant from the Bishop for the lands on which the ruinous walls stand. I think your lordship will not be very sedulous to undertake the work till further consideration."

At this time there was a tax called Hearth Money of 2s for every hearth or fireplace. The lists of those who paid it in 1666 and 1669 are in the Record Office, Dublin, and are most valuable as giving the names of the inhabitants at that time. In Magheragall parish there are 91 names, and only one was the happy possessor of two fireplaces -- Mr. Edward Breare, who, no doubt, lived in the principal house at Brookhill. I did not fully copy the list for Lisburn through  want of time, but I noticed that Lord Conway had 23 hearths; Wm. Clee, Captain Roma, Roger Jackson, and Wm. A. Hoole had four each.

In 1689 Killultagh was in the hands of James' army for several months. But the arrival of Schomberg in August soon changed the state of affairs. During the following winter he fixed his headquarters at Lisburn; his army encamped at a place known as "The Trench," about a mile from Drumbeg. It was surrounded by a high ditch and a deep fosse several  miles extent, which encircled the present properties of Trench House and Belvidere House. The horse and artillery encamped at Brookhill. The ground there was pallisaded, without a trench, and the stakes remained for a long time afterwards. A portion of the ground was eventually converted into a farmyard by "Commodore" Watson. The "Park" adjoining the camp lay in a direct line between Brookhill and the Trench, and was surrounded by a wall. It is still called the Park (U.J.A., vol. iv., Old Series).

In July following was won the Battle of the Boyne, which is noted in the Cathedral Register (in the section for marriages) as follows:-- "God Allm: fought for King W: and gave him a remarkable victory over ye Irish at the Boyne near Tradathye 1: day of July, in 4 days after Tradath and Dublin did yield without blood." (Tradath, Drogheda.)

Bishop Taylor's connection with Lisburn cannot be gone fully into here. He lived at Portmore, Hillsborough, and for some time in a house off the Magheraleave Road, on the left-hand side, part of which is still occupied and part is in ruins. He also resided in a house in Castle Street, where he died in 1667.


(This article was originally published in the Lisburn Standard on 30 August 1918 as part of a series which ran in that paper each week for several years. The text along with other extracts can be found on my website Eddies Extracts.)

Posted by an extract of reflection at Friday, August 31, 2012