The Charge of the Irish Brigades 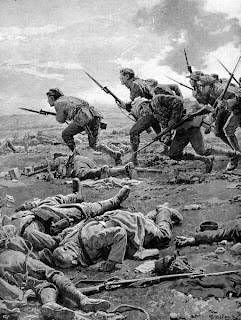 Anniversary of the Charge of the Irish Brigades.

This week, two years ago, the Irish Division added another chapter to the history of Irish valour. France can never forget Guillemont or Ginchy.

The battle of the Somme had entered on its third month when the Irish Division was moved into the zone of operations. They came -- they saw -- and for all time they emblazoned on their colours the names of Guillemont and Ginchy. These two villages were key positions. Once in our hands, the whole of the German second line of defence was broken. Knowing their value, the Germans had made tremendous preparations for their defence and thrown their best troops into both. But the Irish Brigades took them in their stride.

Guillemont fell on Sunday, September 3rd, to a charge which was one of the most astonishing features of the war. The pipes playing and the green flag flying, the Irish battalions swept on like a human avalanche. They had been "fed up" with the weary months of trench fighting. Now they were in the open, the fighting every Irishman loves, and they thirsted to get to close quarters with the enemy. Right through the first, the second, and third German lines of trenches they swept with an irresistible rush till the whole of the village was in their hands. By Sunday night, victory was overwhelming and complete.

For six days the Irish Brigades held the captured ground, lying in shell-holes under constant shellfire, and without hot food or much water. Then, on the afternoon of September 9th, came the order for the attack on Ginchy. Amid a wild "Hurroosh" and the cries of "Up Dublin!" "Up Munsters!" and "Up the Rifles!" they swept forward, pipes again skirling and the green flag waving. In eight minutes after starting-time they had reached their first objective in the village, right across the first German trenches -- a distance of 600 yards, which is a wonderful record. The right was checked for a little by a post of German machine-guns, but a brilliant little encircling movement drove the gunners out and the whole line advanced. Reckless of snipers and machine-guns, the Irish swept through the village, searching out the "Jerrios" in their concrete dugouts and tunnelled chambers. They were Bavarians and fought savagely, but the Irish bayonet was too much for them. The work was short, sharp and decisive. Within ten minutes of reaching the centre of the village the Dublin's, who were in the van of the attack, had got 200 yards beyond the northern side.


But the rapidity of the advance was not without its drawbacks. The troops on their right and left had not been able to keep up with them, and so the Irish Division found themselves in Ginchy with both the right and left flanks "in the air," a situation full of disaster according to military experts. But the Irish Brigade recked nothing of their theoretical peril, they were determined to hold what they had got, and THEY DID IT.


"The splendid success of the Irish Brigade from a military point of view is their success of taking a hostile front of 900 yards to the depth of nearly a mile with no supporting troops on either flank."

This is the tribute of an Englishman, Mr. Philip Gibbs, the distinguished war correspondent. He goes on to say:--


"From a non-militarily, technical, human point of view the greatness of the capture of Ginchy is just in the valour of these Irish boys, who were not awed by the sight of death very close to them and all about them, and who went straight on to the winning-posts like Irish race horses. The men who were ordered to stay in the village almost wept with rage because they could not join in the next assault."

The following morning they came out of the battle, weary and spent, but marching erect with heads held high. The honours of the field were with them; they had done a good day's work for Ireland. Decked with German caps and helmets, and bearing many a souvenir of their victory, they met a battalion of the Irish Guards going up to the line. "Up the Dubs.!" shouted the Guardsmen as they passed. "Up the Micks!" came the answer in shoot. IRISHMAN ALL.

And they strode proudly along, back to the rest they had earned so well; and as the pipers played them out, now with a march of triumph for the deeds they had wrought, and now with a lament for the boys who never would march behind their flag again, each man felt sure if his heart that his countrymen at home would see to it that the dead would not be unavenged or the living be deserted by their brother Irishman.

The text of this article was originally published in the Lisburn Standard on 6 September 1918 and can be found along with other extracts on my website Eddies Extracts.

Posted by an extract of reflection at Thursday, September 06, 2012