Sport in Lisburn (pt3) and Other Extracts 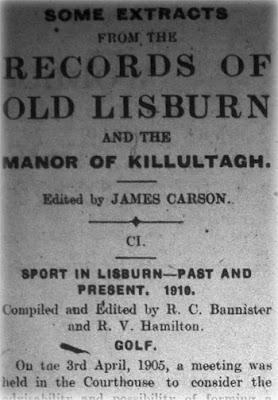 On the 3rd April, 1905, a meeting was held in the Courthouse to consider the advisability and possibility of forming a Golf Club in Lisburn.

The picturesque and lovely grounds known as "The Manor House Lands," some 43 acres in extent, adjoining Longstone Street and Dublin Road, were secured on a lease for 20 years, and steps, immediately taken for the laying out of a nine-hole course.

The membership for 1905-06 consisted of 119 gentlemen and 95 lady associates and juveniles. During the first year of the club's existence a suitable clubhouse, with separate accommodation for ladies and gentlemen, was erected at a cost of some £300.

An extract from the Preface sets forth the plan of the work and the author's position:--


The documents printed in these two volumes form part of a collection made many years' ago. At the time I was of opinion that the view taken by Prendergast in his well-known book -- The Cromwellian Settlement of Ireland -- was not an entirely impartial one. I thought it possible to present the Cromwellian policy in a more favourable light than either he or Carte, with his royalist predilections, had done. The Rebellion presented itself to me as an episode in the great European struggle between Protestantism and Roman Catholicism, in which England and Ireland found themselves in opposite camps, accentuated by the special difference between them in the matter of the legislative independence claimed by Ireland and denied by England. It was a square fight between Ireland and England, and England won.

This is a collection of letters dealing with Ireland, political and social, after the Rebellion of 1798. One of considerable local interest appears from the Rev. Philip Johnson, Derriaghy, to the Viceroy, dated 1807, detailing his public conduct in the years 1793 and 1796, and claiming recognition from the Government. The appeal was made in vain.

In M'Comb's Guide to Belfast and the adjoining Districts (1861) it is stated that Bessie Gray, the heroine of Ballynahinch fight in 1798, was a native of Killinchy. M'Comb further wrote a poem commencing --

If through Killinchy's woods and vales
You searched a summer day,
The loveliest maiden to be found
Was bonny Bessie Gray,

and going on to describe her death.

A writer in the "Newtownards Chronicle" challenges the accuracy of M'Comb's statement, and describes the poem (see article 65) as misleading:--


The charming verses written by Mr. M'Comb concerning this dead Irish Joan of Arc, whose memory is revered by countless thousands of the Irish race at home and abroad irrespective of politics or religion, are misleading, and not all accurate.

The house in which Betsy Gray was born stands within a short distance of the mansion erected at Bangor Granshaw by Mr. James Knox, and which is at the time of writing (1918) owned and occupied by Mr. Robert Warden, senior member of the firm of Messrs. Warden Bros., ironmongers, High Street, Newtownards. It is named Summerhill. The house in which Betsy Gray first saw the light is, at the period of writing, occupied by Mr. William Gray M'Cartney, who is a direct descendant of the Gray family, and who possesses many priceless relics once owned by his ancestors, and handed down from generation to generation, along the ailes of time. Let me mention one. It is the lease held by Hans Gray (Betsy's father) of the farm he occupied. This lease proves beyond all dispute that here in the townland of Granshaw was born this leader of patriots, who met her death at Ballycreen, within two miles of Ballynahinch.

If anyone wish to verify the truth of the foregoing facts they have simply to journey, by road or rail to the Six-Road-Ends. On rail Groomsport Road Station is where to step off. Five minutes will then take you to the Six-Road-Ends, and the residents of this historic neighbourhood will point out with pleasure, not unmixed with pride, the old landmarks, and give freely all information they can to all those who seek for the truth about the past happenings of the long ago.

The following verses are taken from "Betsy Gray," or "The Hearts of Down," by W. G. Lyttle, and have the merit of being true:--

BETSY GRAY.
(A Ballad of Ninety-Eight).

Oh, many a noble lad and lass
Who joined the fight of ninety-eight,
To right the cruel wrongs of years,
Did meet with sad and bloody fate.

On Ednavady's sloping height's,
In June, upon the thirteenth day.
In thousands stood the Patriots bold,
To fight for home and victory.

But bravest of them all, I ween,
Who mustered there upon that day,
And drew the sword for fatherland,
Was lovely, winsome Betsy Gray.

From Granshaw, near to Bangor town,
With Willie Boal that day she came;
Her brother, too, was by her side,
Inspired by patriotic flame.

And when the tide of battle raged,
And showers of bullets fell around,
Still in the thickest of the fight
Was noble-hearted Betsy found.

When adverse fate with victory-crowned
The royal host upon that day,
Poor George and Willie joined the flight,
And with them lovely Betsy Gray.

Along the Lisburn Road they fled,
Pursuing Yeomen keeping watch;
Then Betsy drew her gleaming sword
And hid it in a farmhouse thatch.

She reached the vale of Ballycreen--
Her friends some distance were behind--
And quickly did she look around
A quiet hiding place to find.

But, ere 'twas found, she heard a cry,
Alas! too well she knew the sound;
Her brother and her sweetheart true.
Had by the Yeoman band been found!

Then from the grassy vale she sprang--
This beauteous, noble, fearless maid--
And back she ran with bounding step,
That she might seek to give her aid.

Ah, what a sight then met her gaze!
Her Willie weltering in his gore,
And George, her brother, by his side,
Pleading for life in accents sore.

A Yeoman raised his sword to strike,
As Betsy to the rescue ran--
"Oh, spare my brother's life!" she cried,
"Oh, spare him, if you be a man!"

She raised her white and rounded arm
As if to ward the dreaded stroke;
Vain was her prayer -- the weapon fell
And smote her hand off as she spoke.

Another of the murderous crew,
A man who come from Anahilt,
Laughed at the brutal deed and cried --
"More rebel blood must yet be spilt!"

He drew a pistol from his belt,
And shot poor Betsy in her eye;
She sank upon the heathery mound,
And died without a sob or sigh.

That night the murdered three were found
By Matthew Armstrong -- then a lad --
Who, quickly running to his home,
Related there his tidings sad.

No tombstone marks that humble grave,
No tree nor shrub is planted there;
And never spade disturbs the spot
Where sleeps the brave, where rests the fair.

Shame on the cruel, ruthless band
Who hunted down to death their prey!
And palsy strike the murderous hand
That slew the lovely Betsy Gray!

(This article was originally published in the Lisburn Standard on 20 September 1918 as part of a series which ran in that paper each week for several years. The text along with other extracts can be found on my website Eddies Extracts.)

Posted by an extract of reflection at Thursday, September 20, 2012