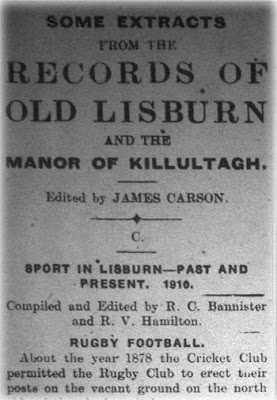 About the year 1878 the Cricket Club permitted the Rugby Club to erect their posts on the vacant ground on the north side of the playing pitch.

Among those who played for Hertford in the few years of its life as a Rugby Club the names which jump into mind include the Warings (Charlie and Sam), Bob, Jack, and Alfie Savage; Joe and Charlie Atkinson, Bob Alister, Hugh Mulhollahd, Sam Beggs, Johnston Watson, Charles Mockler, W. J. Meechan, Arthur Williamson.

In 1882-84 Rugby football in Lisburn was in a very flourishing condition. Bob Savage, whose value to the game can never be accurately measured, while captaining Hertford, organised in Stewart's Mill a team calling themselves Lisnagarvey. Of that team one man at least, given better opportunities, would have reached high, if not international class, to wit, Joe M'Mullan.

This club subsequently extended its borders, and many young townsmen joined it and became fine players and good sportsmen. Then the Good Templars organised a club, calling it "Triumph" after the lodge of that name. This club produced such stalwarts as Tom Getgood, Willie Lavery, Bob Greenfield, and Sam Waring. On one occasion Mr. Williamson, acting as hon. secretary for Hertford, found himself in difficulties for a team. He went to the Good Templar Hall in search of subs., and was met by the four worthies mentioned above. A bargain was proposed: the four would turn out, but the secretary must join the lodge. He did. There was also some good school football. There were two Intermediate Schools in the town, each having a team. On occasion these two joined forces and played as the Lisburn Academicals. The Ulster Provincial School also had a fine team, for which the Davies played.

In 1884 all this activity stopped with a crash. By a majority the Hertford Club decided to take up the Association game. The Ulster Provincial School followed suit; the two Intermediate Schools were combined; the Triumph and Lisnagarvey clubs ceased to exist. It seemed as though the death-knell of Rugby football in Lisburn had been sounded. The darkest hour had been reached: the dawn was at hand.

In January, 1885, in response to letters notifying the purchase of a cup for competition among the senior clubs, a meeting was held in the Tea Rooms in Market Street. Only seven men turned up -- Sam Morrison, Jack Savage, W. J. Meehan, Arthur Williamson, Bob Alister, H. W. Major (a mere schoolboy), and Bob Greenfield. It was decided to enter a team for the cup competition. The colossal cheek of that decision makes one, looking back over the long interval of time, both sad and merry. The Union fee and the cup subscription were made up at the meeting. Morrison became captain; Meehan, secretary; and Williamson, treasurer, the greatest sinecure ever invented.

The young team, however, found itself in the final at the first time of asking. The result was remarkable. R.W. Morrow now joined, and Stavely Dick, then at Queen's College, Cork, hurried home to assist. But North were taking no chances. They put on a side containing nine international. Lisburn were beaten by two goals and two tries to a goal dropped by Morrow, and worthy of even his great reputation. Gathering the ball near his own twenty-five, and bursting through, he ran almost to half-way. Then wheeling between two opponents he took his shot. Those who saw that goal agree that no finer score was ever made. The position of the club was now firmly established, and the season 1885-6 opened with every prospect of success. Morrow took up the captaincy, and Williamson combined the offices of secretary and treasurer, retaining thorn until the dissolution of the club in 1889.

Stewart Irwin, who rendered the side good service during the season, had to stand out of the cup match as the result of an accident. Waring had cracked his knee in a practice match. J. S. Dick was at Cork. He and R. Stevenson were capped in this year in all international matches, assisting Ireland to beat England for the first time in the history of these games. North beat Lisburn in the cup tie by a try to nil.

That is was a great team goes without saying. Morrow was unquestionably one of the greatest full backs the game has yet produced. Holmes was one of those superb players who excel at every game they play. As Morrow's successor at full back for Ireland he shared in the eventful period when Ireland at length attained the measure of her great rivals, England and Scotland. Dunlop was for several years Ireland's best wing "three." Jim Stevenson, capped at "half" in the following year, 1889, was the last "big" man to occupy that position. Waring but for his injured leg, would without doubt have also got his cap. Bob Stevenson may dispute with J. W. Taylor in earlier days and with Tedford in recent times the title of Ireland's greatest forward. J.S. Dick, capped 1887, probably holds the record for captaining cup-winning teams. Mockler and Major both represented Ulster in their day and generation. The rest did their best to prove themselves worthy of such august company.

But the end was at hand. Time moving forward brought closer to many of the team the inevitable process of "getting qualified." And when the earlier matches of 1888-9 came round the personnel showed many changes. Still, when at Christmas, Bective Rovers, holders of the Leinster Cup, met Lisburn, holders of the Ulster Cup, a scoreless draw was the result of a very hard tussle. Later, in Dublin, Wanderers beat Lisburn by a try, the feature or the game being Wheeler's display at half after an absence from the game of over twelve months. Our defeat by Queen's in the second round of the cup by a try to liil closes the tale of the grand old club.

Rugby football was practically defunct in the town till the Lisburn Wheelers' Cycling Club, feeling the necessity of having some form of winter sport in which their members could engage, decided to take up the game of Rugby football, and in the autumn of 1899 formed a club called the Lisburn Wheelers' Rugby F.C. The following officials were appointed:-- Captain, J, T. Kirkwood; committee, James Stockman, John Jefferson, J. T. Wilson, F. M'Murray, J. F. M'Kinstry, Joe Keery, W. A. Mussen, with E. B. Waring as hon. secretary.

The first practice game was held in a field at Hogg's Locks, but the club was afterwards able to secure the use of the ground inside the cycling track in Wallace Park for their games.

It was in September, 1902, that a group of three met in the Temperance Institute. The subject of discussion turned on winter games; and a suggestion made by one to form a Hockey club soon became the resolute determination of Messrs. R. C. Bannister, W. S. Duncan, and E. E. Wilson. Likely members were at once interviewed, and many promises of support obtained. A meeting was called, and after many and varied proposals, the new club was finally named the Lisnagarvey Hockey Club. The club colours chosen were dark and light blue. The first office-bearers were -- Captain Mr. R. C. Bannister; hon. secretary, Mr. W. S. Duncan; hon. treasurer, Mr. E. E. Wilson.

Players in 1910, with the eleven they most frequently play for:--

The First XI. custodian is E. F. C. Holmes, too well known in hocket circles to require any laudatory remarks; Hull and M'Murray are those usually seen in the rear division; while Hamilton, Patterson, and J. H. Wilson form the half line. In the fore-rank Lester, Bannister, Boyd, Hanna, and Boyd may be seen; Simpson and Garrett being next in order.

The Second XI. goal is graced by E. Brown; the back division manned by Duncan, Allen, or J. Hanna; in tho half line, Gillespie, John Wilson, M'Cluggage, or Arnold; forwards, Smith, MacGregor, Simpson, Garrett, Stevenson.

The Fourth XI. is composed of the lesser lights of those mentioned in Third XI., with Q. Dunlop, H. Morrow, J. Alexander, S. Goldsmith, and C. Garrett.

Many Lisnagarvey players have been selected for representative matches. In junior circles Messrs. E. Boyd and F. G. Hull were chosen for Ulster v. Leinster, and last season Mr. J. H. Simpson got his place for Ulster; and in senior circles F. G. Hull has, of late years, been selected regularly for the Provincial matches. Those appearing in other representative matches in junior or senior circles include Messrs. E. Boyd, H. Burrowes, Wm. J. Wilson, C. Lester, F. G. M'Murray, W. Patterson, and R. V. Hamilton.


(This article was originally published in the Lisburn Standard on 13 September 1918 as part of a series which ran in that paper each week for several years. The text along with other extracts can be found on my website Eddies Extracts.)

Posted by an extract of reflection at Friday, September 14, 2012