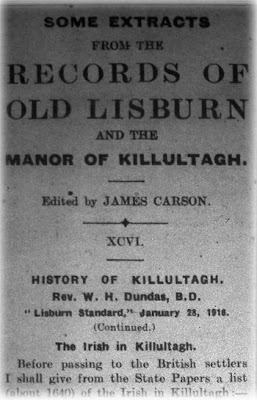 The Irish in Killultagh.

Killultagh was a territory by itself and belonged neither to Antrim nor Down until 1605. At first it was proposed to joint it to Down and then divide the latter into two counties, butt on account of the Lagan separating it from Down it was afterwards felt that the Sheriff of Antrim could more conveniently look after the interests of the inhabitants, and in that year it was joined to Antrim. At this time it is said that there was no bridge over the Lagan, though one is shown, on a map about twenty years later. The parishes of Killultagh were often reckoned in the Diocese of Down until even a later date.

family belonged originally to Flintshire, in Wales. His father had purchased the Manor of Ragley, in Warwickshire, about the end of Elizabeth's reign, and it is supposed that most of the settlers, came from those parts, sailing from Bristol. There was a tradition among the people that their fathers came from the "apple counties," and certainly the love of orchards is much more marked in the districts settled by English than in those planted by the Scotch. There were also some settlers from Wales, and many came from Yorkshire at a later period with George Rawdon. A letter written in 1697 says:-- "There is in the North of Ireland an estate which was formerly Lord Conway's. It was first purchased by Sir Foulke Conway for about £500. The rent roll is now about £5,000 a year. The land does not lie upon the sea, the ground is very indifferent, 'twas altogether a wood, as the name denotes; and yet in the memory of men now living has been thus improved by a colony of Yorkshire people and others brought over and settled by Lord Conway and managed by Sir George Rawdon" (Ulster Journal of Archæology, vol. iii., old series).

Ulster at the Plantation was what Canada is at present -- a country which emigrants were invited to enter and clear and make productive. There were pamphlets, too, setting out its attractions, though in rather different terms from those of to-day, as the following extract from Blennehassett's pamphlet (1610) shows:-- "Art thou a gentleman that taketh pleasure in hunt? The fox, the wolf, and the woodkerne (i.e., the wild Irish) do expect thy coming."

Sir Foulke took a prominent part in the affairs of the country. In the absence of Lord Chichester he acted as Governor of Carrickfergus and a great part of Antrim and Down, and as Commander-in-Chief of the Fleet on Lough Neagh, or Lough Sidney as it was also called. There is a good story told by Dobbs of how Sir Moses Hill entertained him on one occasion at Chichester Castle, the ruins of which can be seen at Whitehead. Hill having invited the Governor of Carrickfergus (Sir Foulke) to the country, "ordered his butler the night before that he should, when they came to hard drinking, have some bottles of water in readiness for him, and ply the Governor with wine. The butler (being an Irish boy), instead of observing his master's commands, when the hard time came gave His master wine and the water to the Governor, so as Sir Moses could not rise out of his chair when the Governor took leave of him, and thanked him for his meat more than his drink, which put Sir Moses into a great passion, not apprehending then how he bad been served; but next morning, examining his boy, he was sensible that he drank wine and the Governor water. And threatening to have the butler hanged, he received no other answer from the latter but an oath, and that he knew no reason why he that had paid for the wine should drink water, and the Governor drink wine that had paid nothing for it. Which answer it seemed served the boy's turn, for I myself have seen him, a little odd but brisk man, and lived eight or ten years after the breaking out of the Rebellion of 1641."

Sir Foulke Conway died in 1624, having seen the Church of St. Thomas, now the Cathedral of Christ Church, Lisburn, opened for divine service in 1623. He was succeeded by his brother Sir Edward, Baron Conway of Ragley, who got the title of Viscount of Killultagh in 1637 and built the Castle of which the remains still exist in the Castle Gardens. His son Edward, the second Viscount, succeeded in 1630 and died in 1655; and his son, also named Edward, who built the castle at Portmore, died in 1683. The property then passed by his will to Popham Seymour, who took the name of Conway, and was attainted by the Irish Parliament in 1689; and afterwards to his brother Francis, the ancestor of the Marquises of Hertford.

The first Viscount also established a school at Lisnegarvy. Writing to this son in 1629 he says:-- "The school is not yet too full of scholars for one man to manage, even though he does the work-of the church also. If God prosper it, I will see that it is given the whole time of one man." His advice to his son was very concise and to the point:-- "Be just in all matters of the Church, and endeavour to increase my revenue as best you can." In another letter the same year he says:-- "With regard to the parson of Blaris' claim for tithe within Killultagh, take advice of counsel on it at any cost. I want to provide you with a Bible and a bell." There are many references in the Calendars of State Papers to disputes with various clergy about the tithes, and an examination of the originals in London might reveal many interesting particulars.

The schoolmaster referred to above may have been Philip Tandy, who held the position in 1635. He had charge also of Lord Conway's valuable library, as a letter to Rawdon shows (1635):-- "I am setting Lord Conway's books in alphabetical order, and give all the time to them that I can spare from my school. I classify them also by volumes and sciences. In the Christmas holidays I unchested the chested books and put them in the drawing-room, where they are often aired by good fires. I lately tried to have an usher (assistant teacher), but my school is not large enough to maintain one." Possibly he may have been curate as well. In 1637 he was appointed vicar of Magheragall in succession to William Chambers, and vicar of Glenavy in 1638. He probably held both together, for in 1633 Meredict Gwilliams was vicar of Magheragall, Ballinderry, and Glenavy -- surely a sufficiently large area for one man! The incomes were very small; that of Magheragall amounted to £10 a year. In the Commonwealth Papers he is noted as receiving a salary of £60 a year from 1658 as schoolmaster in Lisnagarvy, in addition to his tithe. The mention of the; tithe shows that he was still in charge of some parish, though it could hardly be Magheragall, where the Inquisition held at Antrim 1557 found that Mr. Andrew Weeke received the tithes from 1650 "until these last two years that Mr. Gellis, a preaching minister, supplied the cure thereof and received the vicarial tithes. Of late Mr. Moore, a preaching minister in Sallary, hath supplied the cure."

Thomas Haslem was also schoolmaster in 1655, and in receipt of £40 salary; he held the position as well as the curacy of the Cathedral for many years after the Restoration.

William Chambers, writing in 1655, has this mysterious sentence in a postscript: "Mr. Tandy's flame is quenched." What is the meaning of it? We meet him again in 1658, when a Mr. Hyrne writes: "I do not quite like Mr. Tandy, and hope you will get Dr. Taylor's opinion on him before you grant him what I hear he desired in his letter." Major Rawdon, writing from Hillsborough, says: "Dr. Taylor preached excellently this morning. Mr. Tandy is also considered a rare preacher and is liked in the parish." Dr. Taylor was the famous Jeremy Taylor, afterwards Bishop of Down and Connor; and in connection with him Tandy made the great mistake of his life. He joined in a charge against Dr. Taylor of having christened Mr. Breare's child with the sign of the Cross -- i.e., of having used the baptismal service appointed in the Prayerbook. It was a serious accusation in those days, as is shown by the fact that a Bishop of Durham was imprisoned for six months about the same time for using this same service. A warrant for his arrest was issued to the Governor of Carrickfergus, and he was sent to Dublin for trial, but his powerful friends appear to have been able to save him. Mr. Breare, here mentioned, lived, I believe, at Brookhill. Dr. Taylor's own reference to this affair is as follows:-- "I fear my time in Ireland is likely to be short, for a Presbyterian and a madman have informed against me as a dangerous man to their religion and for using the sign of the Cross in baptism. The worst event of the information which fear is my return into England." Evidently there were two accusers, and It is open to debate whether Tandy was the Presbyterian or the madman. Probably he was the Presbyterian, for Lord Conway writes that "Mr. Tandy may have enough of these (Anabaptists and Quakers) to set himself against without troubling his peaceable and best neighbours." Conway felt the charge as if it were a personal injury. "I hope when you come over you will take him (Tandy) off from persecuting me, since none knows better than yourself whether I deserve the same at his hands. The quarrel is, it seems, because he thinks Dr. Taylor is more welcome at Hillsborough than himself." Conway, however, treated him very generously afterwards, and the State Papers show that the Viscount employed him as an agent till his death, and he even made provision for his wife and children. Tandy mentioned later that he had a "poor little £30 a year for two small agencies," and delicately hints to Lord Conway that he occasionally spent a little money in the transaction of his affairs. Some of us find a difficulty at times in bringing a letter to a neat conclusion, but I think the following could hardly be surpassed:-- "'Tis now midnight, and (forgive me, my Lord) I am weary, but not of being your Lordship's most humble servant." He died between 1664 and 1666.


(This article was originally published in the Lisburn Standard on 16 August 1918 as part of a series which ran in that paper each week for several years. The text along with other extracts can be found on my website Eddies Extracts.)


Posted by an extract of reflection at Thursday, August 16, 2012