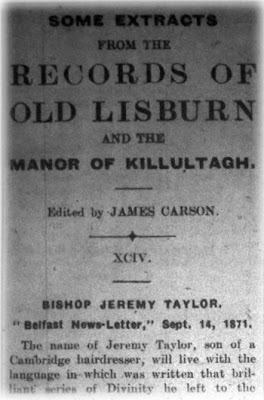 
The name of Jeremy Taylor, son of a Cambridge hairdresser, will live with the language in which was written that brilliant series of Divinity he left to the world, but little, however, is known of the inner life of the famous Bishop of Down and Connor. More than a century and a half after his death, the celebrated divine, Reginald Heber, wrote a sketch of his life, which was much read, and though superior in style to any previous work on the on the same subject, and abounding in passages of high eloquence, it is very abscure in those points of Bishop Taylor's history in which his admirers feel so much interest. Of his early career we have still to learn some details connected with his doings while private chaplain to Archbishop Laud; and how little is known of his persecution in the days of the Protectorate!

But strongest of all is the barrenness of that chapter of Taylor's history that professes to tell of his life and labours during the years he performed the duties of lecturer to the loyalists on Lord Conway's estate at Killultagh. That appointment he received through the influence of his friend, the famous John Evelyn, and his equally attached patron, Lord Edward Conway. About the close of June, 1658, Dr. Taylor left London with his wife and family, and, after various perils by sea and land, he arrived at Portmore, where in the wing of the ancient fortress erected there by O'Nial, and which for more than one hundred years had stood sentinel on the borders of Lough Neagh, a suite of apartments had been prepared far him by Lord Conway's agent. Nothing could have exceeded the romantic beauty of Taylor's residence, and there it was that, comparatively humble as was his position, he spent some of the happiest days of his life. From that period until January, 1661, when he was raised to the Episcopal Bench as Bishop of Down and Connor, we find hardly any record of his movement beyond the mere fact that he visited Lisburn every week, and delivered a lecture there in the church where the Cromwellian soldiers were wont to attend worship. But that was the busiest time of his ministerial existence. He preached every Sunday to the loyalists in the ruins of the sacred edifice from which Kill-ul-Tagh took its name: he lectured in Ballinderry, Soldierstown, and Derriaghy once a fortnight; and during his spare time toiled hard in the composition of his works on Divinity. The absence of lengthened details in the biography of Bishop Taylor is the more to be regretted when such abundant material for that purpose was to be found in the public records of the day. And besides those documents, there is the highly interesting work, entitled "The Rawdon Papers," published many years ago, abounding in passages relating to Taylor. There is also "Evelyn's Diary," a book that reads like one of Scott's novels, and in which are graphic sketches of a most exciting period of national history, many of these especially referring to the greatest divine of the seventeenth century. But so little use have his biographers made of such sources of information, that we are told little more of him that if his diocese had been seated in Timbuctoo.

We have said that Dr. Taylor was appointed Bishop of Down and Connor in January, 1661, and soon afterwards he left Portmore and went to reside at a handsome cottage which his patron, Lord Conway, had erected for him in one of the most picturesque spots that could well be conceived. Bishop Taylor's country house is still standing in Magheralave, and the little study, with its oak wainscoting and handsome windows, as shown to us some years ago, are in themselves sufficient to call forth many recollections of the great man who has been rightly called the Shakespeare of Theology. Besides this cottage, the bishop had a town house, situated in Castle Street, Lisburn, nearly opposite the entrance to the Cathedral. His favourite son died in a few months after he got settled at Magheralave, and was buried in the ground attached to Lisburn Church, but no stone marks the spot where moulder the ashes of the favourite child. This event gave a sad shock to the already weakened constitution of the bishop; still he entered on his enlarged sphere of duty determined to do the work effectually. Lord Conway had then commenced to build a castle at Portmore, and on the site of the ancient stronghold already alluded to. This magnificent pile was more like a fortress than a nobleman's mansion. The stables alone occupied a range of one hundred and fifty feet. These were two stories high. Storage to contain provisions for one year's consumption of two troops of horse was amply provided for, as well as accommodation for all the soldiers. At present not one stone of the castle is to be seen. Some portion of the stables remains and part of the garden wall, but the deerpark, with its two thousand acres of land, has long since been turned to better purposes than feeding an antlered herd. In the vicinity of the castle, and close by the shores of Ireland's splendid lake, a summer residence was erected for Bishop Taylor, and there, during the remaining years of his life, he spent a part of each season. Lord Conway and his lady resided at the castle for a great portion of each autumn. And during these times it was usual for them to visit all parts of the estate. His lordship took great delight in marking the progress of improving tenants, and never failed to encourage by something more than mere laudation every work of agricultural advancement. Bishop Taylor occupied a farm of forty Plantation acres, and while his friends remained at Portmore he was always a favoured guest at Lord Conway's table. From this time he continued to labour diligently in his diocese; he visited every parish, and occasionally preached in some of the churches; but how few of these are standing at this day! The ancient Temple of Down exhibits no assaults of time; Lisburn Cathedral yet rears its head in lusty strength; but the old Corporation Church of Belfast, with its high-peaked, straw-covered roof, and castellated gables, is only known in history.

The income of the Bishop of Down and Connor was large, and his household outlay moderate, and all his savings were invested either in works of improvement or deeds of charity. He had the Cathedral of Down completely remodelled, he spent large sums on that of Lisburn, and the other places of worship under his control were not forgotten. The See of Dromore was then one of the least valuable in point of income in Ireland. Its venerable church had fallen into decay, and although that See had no immediate claim on him, he undertook to repair the sacred edifice, and had all the work done at his own private cost. But, unfortunately for the Church of which he was so bright an ornament, his end rapidly approached. On the 24th of July, 1667, he caught fever while attending one of his town parishioners, and in his own study in Castle Street, Lisburn, expired after a few days' illness. His last words were, "Bury me in Dromore," and, in accordance with that desire, his remains were, interred there on the 6th of August, 1667. None of his sons survived him; but his widow and daughters lived long afterwards. Edward Harrison, of Magheralave, who sat for Lisburn in two Parliaments, was his grandson; and William Todd Jones, who represented the same borough from 1783 to 1971 [sic], was also a descendant of the famous bishop.

Edmund Gosse, in his Life of Jeremy Taylor (1904), introduces some new matter, and disposes of several ancient fictions regarding the history of his family.

This work was first published in 1849 under the title "Annuls of Ulster, or Ireland Fifty Years Ago." It again appeared in 1853 as "A History of the Irish Rebellion." The present edition, 404 closely-printed pages, contains an introduction, notes, and appendix by Mr. M'Crum, and a biographical sketch of M'Skimin.

Samuel M'Skimin was the well-known historian of Carrickfergus. He was born in the year 1775, and died in 1843. Being 23 years of age when the Rebellion broke out, and having had personal knowledge of much that he describes, he must be regarded as an original authority.

The volume only deals with the Rebellion in so far as it relates to Ulster, and in its pages will be found a vivid and minute account of the rise and doings of the United Irishmen in the North, chiefly in the County of Antrim, and the events that led up to the disastrous year of '98.

From the abrupt manner in which the Annals terminate it is evident that Mr. M'Skimin had not completed his narrative at the time of his death. The Battle of Ballynahinch, and Henry Monro, of Lisburn, are merely mentioned, and no particulars whatever given regarding them.

Referring to Lisburn and the events connected with the Rebellion, it is stated:


In the towns of Belfast, Lisburn, and Carrickfergus the disaffected were awed into submission by their numerous garrisons, yet several zealous adherents from these towns passed into the country and were actively engaged in the insurgent ranks.


(This article was originally published in the Lisburn Standard on 2 August 1918 as part of a series which ran in that paper each week for several years. The text along with other extracts can be found on my website Eddies Extracts.)


Posted by an extract of reflection at Thursday, August 02, 2012