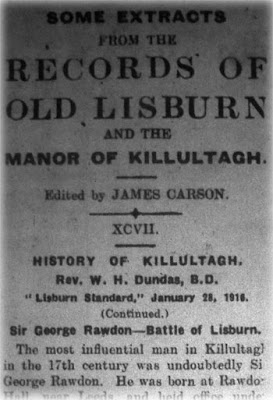 The following Depositions referring to the 1641 Massacre bear on this subject:--

Margett Erwin, living at Brookhill, in Co. Antrim, aged 30 years or thereabouts, deposed -- "At he beginning of the Rebellion the Lord of Aghadowey, in the Co. of Antrim, with one Mr. Houghton and her master, being fearful of the enemy, left her with his children and went to Lisnegarvy, and most of his fears was of Cullo M'Nogher, because there was some falling out between them formerly. She heard Cullo M'Nogher, who made his braggs and boasted, and swore that if he had Mr. Houghton there he would do the like to him, and that he did not care for the killing of any Englishman -- whelps, and said that he had been at Lisnegarvy with Sir Phel., and that he mist his brother, but if his brother was lost he would kill Mr. Houghton's children and dash their heads against the stones; but one James M'Gilmurry answered him and said he should not kill the poor innocent children, but he said he would for they were of the English blood. This examinee further saith that a little after the defeat the enemy got at Lisnegarvy that there came to the house the said Cullo M'Nogher, Edm. M'Gilmurry, and others, and the said Edmund took this examinee out of doors and told her that they had been killing five women and two boys between Ballinderry and Glenavy by their own houses, who said he was sorry for a gritty youth who was there killed with flaxen hair; he made such a pitiful cry and the youth ran away, but the they followed him and knocked him down and killed him, and hanged the women, one being Jane Carudders and (?) Ed. Hogg's wife Margarett Cassee, Ed. Hogg's -----, and Jennett Bell, and further saith not."

Turlogh Marchy, of Ballinderry, deposed -- "John Carudders and Edw. Hogg, two of his neighbours, told him that their two wives were killed and two women more the first winter in the Rebellion at Ballyelwash, in the parish of Ballinderry, and that Owen M'Irelany and Nellie M'Irelany and two of the Davyes and others were actors in the said murders." (I cannot identify this place; it appears as "Ewaysh," and was part of Sir Fulke Conway's property, at an Inquisition held at Carrickfergus in 1625.)

In 1646 we find Major Rawdon buying horses in England for Colonel Hill's cavalry in Ulster; he paid £7 10s apiece, and was allowed 30s apiece for taking them from London to Liverpool. In 1649 He got a new lease of Brookhill, now rebuilt, for sixty years, from Lord Conway, in return for his services, with the six townlands of Ballymoney, alias Kilcorig, Ballynadolly, Ballyeloughy, Ballycarrickmaddy, Ballycloughmelough, and Ballymeoner (Ballymave), also 50 acres of Aghenahogh and Knocknedawney lying outside the park pale, and 80 acres of the townland of Magheragall, together with the water mill or millstead, and free liberty to build up a watermill or windmill upon some or any of them. Rent to be 52s (an acre) a year; after the death of George Rawdon to be raised to £80. He does not appear to have lived much there, as in 1654 he was getting a house built in Lisburn, having married in that year as his second wife Dorothy Conway, sister of the second Viscount.

In 1657 Lady Conway was in ill-health, and was in search of a very curious remedy which was to be made from the moss which grew on dead men's skulls. Rawdon was asked to procure it for her, and in June he wrote -- "I have sent almost all Ulster over for moss of slain men's skull and have got none yet but two. I expect better accounts shortly of the matter from others. There is enough in churchyards, but these are not valued as to our Lady's purpose by our chirurgeons" (surgeons). Next month, however, he had got a good proportion of most. Dobbs says (1683) that in a churchyard on an island in Lough Begg (near Toome) may be had stores of moss that grows on dead men's skulls, useful in staunching blood and said to be a great ingredient in making sympathetic powder.

In the same year he acted on a Commission appointed by the Cromwellians for rearranging parish boundaries, so that each minister might have £100 or at least £80 a year, and yet not so large that any part should be above three miles from the church. The Presbyterians, however, were suspicious of Rawdon and esteemed him "one of the horns against the Kirk." The effect of the recommendations of these Commissioners would have been to add a part of Magheragall to Lisburn, a part of Ballinderry to Glenavy, and to make a new church and parish called Lackey (near Megaberry) for the remainder of Magheragall, Ballinderry, Aghalee, Aghagallon, and the Chapellry of Magherameske; but the restoration of Charles II. in 1660 saved these parishes from extinction. Rawdon was then summoned to London, and for his services he secured a grant of several thousand acres in the territory of Moira which had belonged to the O'Laverys. He was elected M.P. for Carrickfergus, and was made a baronet with the title of Sir John Rawdon of Moyra House.


(This article was originally published in the Lisburn Standard on 23 August 1918 as part of a series which ran in that paper each week for several years. The text along with other extracts can be found on my website Eddies Extracts.)