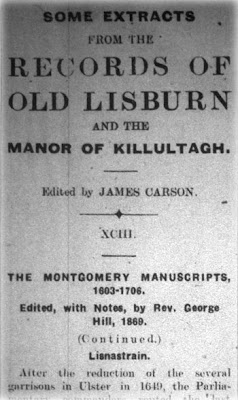 After the reduction of the several garrisons in Ulster in 1649, the Parliamentary commanders routed the last royalist force in this district, commanded by Viscount Montgomery, the Earl of Clanbrassil, and Sir George Monro, at a place called Lisnastrain, in the parish of Drumbeg, County of Down. Ormond had sent reinforcements to the Ulster royalists, under the command of Daniel O'Neill and Mark Trevor, but this force (which would probably have been very important, being led by such distinguished officers) came too late. Nearly all that is known of this decisive battle at Lisnastrain, near Lisburn, is contained in a tract printed in London soon after its occurrence, and entitled "Two Letters from William Basil, Esq., Attorney-General of Ireland; the one to the Right Honourable John Bradshaw, Lord President of the Council of State; the other to the Right Honourable William Lenthal, Esq., Speaker of the Parliament of England, of a great victory obtained by the parliament force in the North of Ireland, on the plains of Lisnegarvy, against the enemy there, wherein were 1,400 slain, Colonel John Hamilton taken prisoner, and seventeen more of quality. With a relation of the taking of Drumcree; and of the surrender of Carrickfergus."

Whitelock, in his "Memorials of English Affairs from Charles I. to the Restoration," has given the substance of the letters, adding one or two rumours not mentioned by Basil. Thus, he states that the Lord Clandeboy "was slain, or sunk in a bog, being corpulent," and that "Colonel Montgomery was taken prisoner." Lord Clandeboy escaped, and lived until the year 1659; and Colonel Montgomery, after having surrendered, was brutally shot.

Earl Conway's letters to his brother-in-law, Sir George Rawdon of Moira, express the writer's desire to introduce all useful and ornamental productions to his parks and lakes in Killultagh. Writing from Ragley, in July, 1665, he says-- "I have advised with Garrett about the hempseed, and he thinks, considering he cannot go into Flanders because of the sickness, it may be provided in England, if you desire it; and that, for the future 2 or 3 acres of that land in the Tunny Park (on Lough Neagh shore) which is newly stubbed up; would furnish you plentifully. If the cranes which you mention do live and will thrive, I intend, God willing, to have them brought over, tho' it be by an express messenger; and in the meantime, it would be convenient to employ some such person about them as would be fit to bring them over. I pray acquaint John Totnal that I desire him to get some beehives at the Tunny Park; for if ever I live to come into that country. I believe, I shall use a great deal of honey, as I do at this present, and have, I thank God, kept myself a great while thereby free from any fits of the stone, and do daily void so much gravel by the use thereof, as is hardly to be believed." On the 9th of February following he writes-- "I have got two couple of right decoy ducks and a drake, such as will fly abroad every night and return in the morning; these I will send over within a fortnight, and I will send to all the decoys in England till I have brought mine into such a condition as it ought to be." Writing from London in October, 1667, he adds this postscript to his letter:-- "I have sent a hamper with 3 boxes in it, and 2 cases with trees; the boxes have in them flowers, roots, and seeds, such as my gardner writ for from Lisburn. They cost me £14, as you shall see by the particulars; they are very choice things, and very good." In these letters the Earl also directs that cranes, dogs, frise, black and grey, and usquebagh may be sent to him in England -- the last-mentioned commonly being always supplied by his sister. Lady Rawdon. -- "Rawdon Papers."

James Mace, B.D., was appointed rector of Blaris, alias Lisburn, February 18, 1617. He succeeded Dr. George Rust on his promotion to the Diocese of Dromore. Mace was also appointed to the vicarage of Derriaghy, near Lisburn, same day, also vacant by the promotion of Dr. Rust. The Crown has the presentation of these a bishoprick." James Mace was probably the son of John Mace, one of the settlers in Lisburn under Sir Fulk Conway. Viscount Conway and Killulta, writing to his brother-in-law, Major George Rawdon, in June, 1638, says-- "My mother writes to me that John Mace's son intends to carry over all the rest of the children, and expects £8 of me to bear their charges, which I shall not do until I have your directions."

This surname is variously spelled Royden, Rauden, Rowden, Rawden, and Rawdon. George Rawdon was the only son of Francis Rawdon of Rawdon, near Leeds, and was born in the year 1604. He was secretary to the first Lord Conway, who died in 1630. By the latter he was, probably, induced to settle in Ulster, where he obtained extensive landed property at Moira. On the breaking out of the rebellion in 1641 he gallantly held Lisburn against a large force of the Irish, under Sir Phelim O'Neill. The insurgents, in their retreat, burnt down his then recently-erected mansion at Brookhill, carrying away £3,000 worth of chattels and plate. In 1665 he was created a baronet of England; and for his many and valiant services to the Crown obtained large grants of land in the counties of Down, Dublin, Louth and Meath. His first wife was Ursula Stafford, a daughter of Sir Francis Stafford of Portglenone, who had been previously married to Francis Hill of Hill-Hall. This lady died at Brookhill in 1640, when only thirty years of age. Sir George Rawdon married secondly, in 1654, Dorothy, eldest daughter of Edward, second Viscount Conway, and sister of Edward, Earl Conway. Sir George received large dowries by both his ladies. He died in 1684, in the 80th year of his age, and was buried in Lisburn.

Sir Thomas Newcomen was a family connexion of the Rawdons of Moira, his nephew, the second Earl of Granard, having married the sister of Sir Arthur Rawdon. He was very anxious that the latter should not be drawn away with the other Northern Protestants to oppose James II. On this subject he wrote several letters to Lady Rawdon, evidently intended to work on her ladyship's fears. In one of these letters, dated 17th January, 1688, he says -- "Since my last to you, madam, I am glad to know that, tho' 'twas debated whether the gentlemen I talked of should be proclaimed traytors or no, 'tis resolved to defer anything of that nature till further provocation is given; therefore, my serious advice to Sir Arthur, and the rest mentioned in my last, is, that they do no act that may rise up in judgment against them; for I assure you that the King is expected here in person . . . I do advise all Protestants to behave themselves, so as to give no offence to the Government, till the King's pleasure is known; but if the Protestants in that country go about to disarm Catholics, 'twill be the means to draw down forces thither, foot, horse, and dragoons, that may bring the rabble and their to an account . . . If your husband was advised by me, he would do as he did in Monmouth's rebellion: offer to raise men to serve the King, and by that means entitle himself to Mulgrave and Seymour's estates in Ireland, out of which, he was so notoriously wronged." In the concluding sentence Sir Thomas appeals in a cunning way to the lady's selfishness, and through her to her husband, Sir Arthur Rawdon, who was nephew of Earl Conway, then lately deceased. The latter had been induced, by some means, to leave his estate of Killultagh to the Seymours, which, of course, was a great disappointment to the Rawdon family, who were more nearly related to him. Lady Rawdon appears to have listened favourably to Sir Thomas's suggestion, and even to have supplied him with important information respecting the movements of Northern Protestants. In reply to one of her letters Sir Thomas writes as follows, in January, 1688:-- "I am bound, madam, to give your ladyship my hearty thanks for your last message received by an express at the head of my men near Dromore; and as for the 7,000 rabble, they did not come at me, and if they had, I would have given them as hearty a reception as I could; and in acquittal of your ladyship's kindness I thought it my duty to let you know how matters go here in relation to our King's affairs . . . My serious advice is that your husband (for the memory of whose parents I retain all the respect imaginable) forbear rendezvouzing hereafter, in imitation of his cunning neighbour, Sir Robert Colvill, who obeyed my Lord Tyrconnel's summons in coming up to town; and let me tell yon there are false brethren in that country, for instance Mr. Waring of Clonconnel, who writ up lately that he was afraid some hot headed young men of his religion and neighbourhood would ruin themselves and others." Sir Thomas was smarting, when he wrote this letter, under a rather ludicrous discomfiture which had befallen him at Lisburn. The "rabble" of which he speaks formed part of the unarmed Protestant forces levied in Down, who had determined to seize the arms of Tyrconnell's troops at Lisburn, Belfast, and, Carrickfergus. Those appointed to do this work at Lisburn, where Sir Thomas Newcomen commanded, actually accomplished it, but hearing that their brethren had failed (or rather refused to proceed with it) at Belfast and Carrickfergus, they returned the arms they had taken from Newcomen's men, subtracting, however, from his small force 150 Protestants, which so alarmed and weakened him that he was compelled to beat a hasty retreat to Dublin.

Sir Arthur Rawdon was one of those excepted from mercy by Tyrconnell's proclamation of March 7, 1688, "in regard," as therein stated, "he had been one of the principal actors of the rebellion, and one of those who advised and fomented the same, and inveigled others to be involved therein." He died in 1695, aged 33 years. His wife, Helena, granddaughter of William, Earl of Monteith and Airth, is said to have been a woman of exquisite good sense and taste, and of unwearied charity to the poor. She was also a great heiress, her mother being Isabella, eldest daughter of John Bramhall, Archbishop of Armagh. Lady Rawdon also inherited the estates of her brother, Sir John Bramhall, of Ruthmullyan (now Rathmolynon), County of Meath.


(This article was originally published in the Lisburn Standard on 26 July 1918 as part of a series which ran in that paper each week for several years. The text along with other extracts can be found on my website Eddies Extracts.)