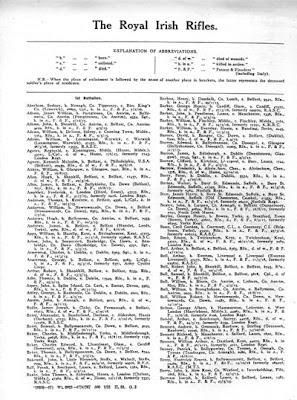 Some time ago I was given several booklets entitled Soldiers Died in the Great War 1914-19.

Published in 80 parts by His Majesty's Stationery Office (HMSO) in 1921 on behalf of the War Office, with each part usually relating to a single regiment, Soldiers Died in the Great War 1914-19 covered "other ranks" including Privates, Lance Corporals, Corporals, Sergeants etc. and contained the details of almost 662,000 men.

It was one of two sets published on those who died during the Great War, the other being "Officers who died in the Great War" which gave the details of almost 42,000 oficers.

Details recorded include: Name; Place of Birth; Where Enlisted; Residence; Regimental Number; Rank; Cause, Place and Date of Death and in many cases Decorations awarded.

While these details are avavilable on some other sites I have decided to transcribe that for the Royal Irish Rilfes and hope to eventually record all those from the Irish Regiments on my web site Eddies Extracts.

I have made some amendments to the printed copy in relation to some spellings and to the layout by trying to present the place of birth in a way that might be more useful.

It should be noted that the details recorded in Soldiers Died in the Great War were not always correct. If you have any information that can correct the details given please contact me and I will gladly make a note against the entry.