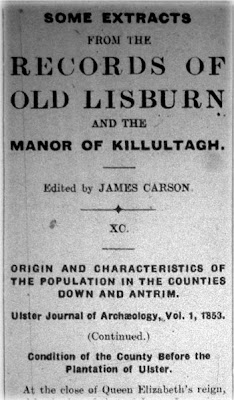 
Condition of the County Before the Plantation of Ulster.

At the close of Queen Elisabeth's reign, and beginning of that of James I., various causes had contributed to reduce the North of Ireland, and not the North only, to a pitiable condition.

One valuable authority, accessible to every reader, is Camden, whose "Britannia" was first published in 1586. He had less assistance from previous writers, in the materials for his account of Ireland, than for those of England and Scotland; he, therefore, took advantage of the latest official information, and, no doubt, sought personal intercourse with those who were minutely acquainted with the scenes of which he treated. His account of our own district has not been always received as correct, but it has been confirmed in the most satisfactory manner by a totally independent authority, the MS. of Dean Dobbs, published by Dubourdieu in 1812. This is supposed to have been written about 1598, and, from internal evidence, it is clear that that date is now much in error.

Bankes, whose immense folio was issued about 1786, says of the whole County Antrim, "it consists chiefly of bogs and marshes, but those parts which are cultivated are tolerably fertile." We cannot reasonably doubt the correctness of the former statement, from what we know of the present condition of the county; especially when we consider what a large amount of bog was converted into arable land, in one of the very best parts of it, and since the commencement of the present century. The character of the County Down is not very flattering either, for at a late period also -- viz., in 1691 -- Laurence Eochard writes of it, that "it is very fertile, though in some places encumbered with woods and bogs."

The whole of that which is now Upper and Lower Massareene, part of Upper Belfast, and the northern part of Lower Iveagh, form an extensive tract of great fertility and beauty at the present day; but the waters of the Lagan and its tributaries, not being confined within convenient limits, naturally produced mashes and bogs, and the natural fertility of the soil covered the greater part with timber. Accordingly, the description of it is contained in such expressions as the following: "Much incumber'd with woods and boggs;" and "a very fast woodland."

Speed's map of Ulster, which was engraved in 1610, was one of great merit in its day.

Killultagh is represented in 1598 as "as bordering upon Lough Eaghe and Clandbrassil;" and in Speed's map it occupies the position of the modern Aghalee, Aghagallon, and Ballinderry, between the Lagan river and the lake. In 1691 it is enumerated as one of the baronies of Antrim, to which it then belonged; and both Upper and Lower Masserene are omitted; it is evident, therefore, that it was then co-extensive with them. Its official existence is now merely as a manor, the general extent of which is coincident with the Marquis of Hertford's estate. It includes the town of Lisburn, and possesses some peculiar privileges connected with it. The district which gave origin to the name is now a townland of less than 700 acres in extent, in the parish of Ballinderry. Its formal name is Derrykillultagh, though popularly abridged; and a respectable mansion, now a farmhouse, commanding an extensive prospect, is known as Killultagh House. This district gave the Irish title of Viscount to Sir Edward Conway in 1626; but it and other honours expired at the death of his grandson, Earl Conway, in 1683. Popham Seymour and his brother Francis, who were cousins to the Earl through their respective mothers, inherited the estates in succession, in accordance with the will of the late Earl, greatly to the annoyance of those who possessed naturally the blood of the Conways, as did Sir Arthur Rawdon, Bart., grandfather of the first Lord Moira. Francis Seymour having assumed the name and arms of Conway, was created a peer both of England and Ireland in 1703; the title in the latter case being Baron Conway of Killultagh, now merged in the superior dignify of Marquis of Hertford.

Kilwarlin is frequently spoken of in connection with Killultagh. It was "bounding upon Killulto," the Lagan river flowing between; and according to Speed it had the modern Lough Beg on its west. He has, however, misplaced the lake of that name, which lies on the parochial boundary between Glenavy and Ballinderry (not the Lough Beg at Toome, north of Lough Neagh); and under the name of Lough Ryle reaches it till in a straight line between Donochelon (Donaghcloney) and Blare (Blaris)! In 1598 Kinelarty lay between Kilwarlin and Le Cahell;" the district must therefore have embraced the greater part of Lower Iveagh. During the contested county elections in the close of the last century it was regarded as co-extensive with Lord Downshire's home estate, and the term "the Kilwarlin estate" is still occasionally heard. Within the last thirty years the understanding was that Kilwarlin corresponded with the Downshire property west of Hillsborough; and a Roman Catholic chapel built just within those limits is called, in the Report of the Commissioners for Public Instruction, 1834, the chapel of Kilwarlin. At the present day very few would recognise the property of the name. It is now popularly almost confined to five contiguous townlands; three in the parish of Hillsborough, one in Moria, and one in Blaris. This district is mentioned in two inferior titles of the Marquis of Downshire, whose ancestor was created Baron Hill of Kilwarlin in 1717, and Viscount Kilwarlin in 1751.

The Plantation of Ulster.

Before the death of Queen Elisabeth, King James of Scotland, in anticipation of the union of the crowns, had turned his attention anxiously to Ireland. He had succeeded in quelling the fierce spirit of the Border people, and he hoped, no doubt, to be able to increase peace and prosperity in Ireland also. This was impossible without good laws; but laws themselves, unless they are obeyed, are of little avail. Sir John Davis, whose service in Ireland began in 1603, published his "Discovery of the True Causes, &c.," in 1612, in which he traces former errors and contemporary misfortunes to their true source. He shows that the nominal possessors of land were too few in number, "all Ireland having been cantonised among ten persons of the English nation;" and that the Irish customs or law -- such as elective chieftainship, and the arbitrary division of the lands among all the males by the chief -- were difficulties quite insuperable in the way of progress. "This is the true reason," he adds, "why Ulster and all the Irish counties are found so waste and desolate at this day; and so would they continue to the world's end if these customs were not abolished by the law of England."

Though the plan of the plantation was agreed upon in 1609, and Sir John Davies reports in 1610 that a certain part of it had been carried into effect, the King and the more intelligent people of the nation continued to attach considerable importance to it. This is evident from the institution of the Baronetcy, in England in 1611, and in Ireland in 1619. The Letters Patent rehearse that it was "to promote the plantation of the Kingdom of Ireland, and chiefly of the ample and celebrated province of Ulster, and to establish that it should more and more flourish, not only by the sincere culture of religion, civil humanity, and probity of morals, but also from the affluence of riches, and plenty of every thing that can either adorn or make happy a commonwealth.

The plantation of Ulster is commonly said to have embraced only six counties -- Cavan, Fermanagh, Armagh, Donegal, Tyrone, and Derry -- because almost the whole of these had been forfeited in consequence of the previous rebellion. Probably the settlement of Monaghan, by the Lord Deputy in person, in 1607, was regarded as sufficient for that shire. At all events, the Counties Down and Antrim are not prominently mentioned in connection with the plantation scheme; though it is, also, evident that they were net excluded from it.

In Down the forfeited lands extended from Clanbrassil on the west, across the territories of Kilwarlin, Iveagh, Kinclarty, and South Clandeboy, and embraced also the greater part, if not the whole of the Ards.

In Antrim, in like manner, the forfeited lands included Killultagh, North Clandeboy, Island Magee, Brian Carrogh's country, and a portion of the Route.

From this date the districts which had been the worst became the best. They were filled with a population of Anglo-Saxon origin; and though the original fountain had sent forth two streams, each of which possessed qualities of its own, their confluence in this new land was unattended by shock or disaster, but tended, on the contrary, to diffuse wealth and prosperity.


(This article was originally published in the Lisburn Standard on 5 July 1918 as part of a series which ran in that paper each week for several years. The text along with other extracts can be found on my website Eddies Extracts.)