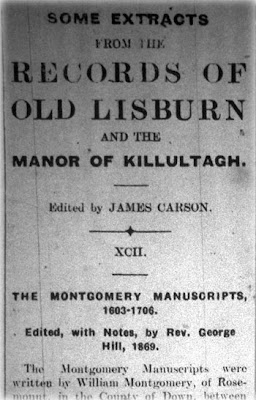 
The Montgomery Manuscripts were written by William Montgomery, of Rosemount, in the County of Down, between the years 1696 and 1706. They consist of memoirs of various members of the Montgomery family, and constitute a valuable contribution to the history of Ulster during the seventeenth century. The notes supplied by Mr. Hill are voluminous, illuminating, and interesting, and from them the following extracts are taken. The volume consists of almost 500 pages.

Killultagh or Killulta was anciently known as Coill-Ulltach, "Wood of Ulster." It was not, strictly speaking, a part of Clannaboy, north or south, but was generally regarded as a territory or district per se. It is now included in the County of Antrim, and (with the small additions of the parish of Tullyrusk, three townlands of Derriaghy, and the east portion of the parish of Camlin) constitutes the present barony of Upper Massereene. Dr. Reeves defines Killulta as containing the present parishes of Ballinderry, Aghalee, Aghagallon, Magheramesk, Magheragall, and the portion of Blaris north of the river Lagan. --  Eccles. Antiquities. An account of the boundaries of Killulta and a list of its townlands are to be found in the Inquisition of 1623; also, Calend. of Pat. Rolls.

In the year 1625 there was issued a decree signed "Longford, Master of the Rolls," in a suit between Hugh, lord viscount Montgomery, and "Dame Amy Conway, widow and administratrix of Sir Foulke Conway, deceased," confirming to the lady Amy permission to cut trees and woods, mentioned in a certain order of the Court, for the use of her iron works, and all manner of woods and underwoods growing on the lands of Slutt McNeale.

The iron works referred to were situated in Malone, probably, at the place called New Forge. These works were rented by a Mr. Stevenson in 1633; he was succeeded by Mr. Robert Barre before 1638. In 1641 Mr. Lawson held them, and sustained a very heavy loss by their destruction during the rebellion of that year. A commission was appointed in 1625 to inquire what waste had been committed in the woods in the territory or country called Slutt Neales, by lord viscount Montgomery, lord viscount Clannaboy, sir Foulke Conway, and the late Amy Conway, widow of sir Foulke. This commission reported that there were then standing on the lands, of the size of six inches at the butt, 8,883 trees; and that there had been cut on the lands, of oak of the same size, 11,631. The commissioners also found that there had been cut for the use of lord Chichester, for the building of his houses at Knockfergus and Belfast, 500 oaks. One Adam Montgomery, for two summers, with three or few workmen, cut forty trees; master Dalway cut three score trees; Anthony Cosleth, who was tenant of sir Moses Hill, cut 127 trees on the land of Blaris. The commissioners also stated that the roofs of the churches of Grey Abbey and Cumber, and a store of timber for the lord of Ards' buildings at Newtone and Donaghadee, had been taken from the woods; and a great store, far the manufacture of pipe staves, hogshead staves, barrel staves, kieve staves, and spokes for carts.

Sir Fulk Conway, the founder of the Hertford family in Ulster bearing this surname, died in 1624, and was succeeded by his brother Edward, who was then 50 years of age. The latter had been knighted by the earl of Essex, in the year 1596, at Cadiz, where he was in command of an infantry regiment. The same year in which he succeeded to his brother's vast estates he was appointed one of the principal secretaries of state, and created baron Conway of Ragly, in Warwickshire. In the following year he was created, by Charles I., viscount Conway of Conway Castle, in Wales. Although twice appointed to the office of secretary, James I. used to say of him that he could "neither read nor write,", and Clarendon wrote of him that he had performed the duties of that high trust "with notable insufficiency." He died in 1630, and was succeeded by his son, also named Edward, the second viscount, who died in 1655. The son of the latter, also Edward, was created earl of Conway in 1679, and died in 1683.

Edward Conway was appointed by Ormond to the command of the English regiment in Ulster from which his father had been removed by the committee of the Parliament. His father, the second viscount Conway, objected to the covenant, and refused to sign it, on the grounds that its acceptance was not one of the original articles agreed to between the Government and the officers of the British forces in Ulster. The parliamentary committee appointed the second lord Blaney as colonel of the regiment in his stead; but the officers of the regiment refused to accept the latter, preferring to have Edward Conway, son of their former leader. The father, although refusing to take the covenant, became quite pliant to parliamentary rule for the sake of preserving his estates, and recommended his son to adopt the same course. The following extract is taken from a letter addressed to his son on this point, and dated London, September 24, 1645:-- "I did once think not to have written, for he that brings this to you knows most perfectly all that concerns this place and these times; but I have heard something which makes me think it most necessary for me ti write to you. Sir Patrick Weames is come to London from Dublin, and sayeth that Lieut.-Colonel Jones is in Dublin, and that you have received a commission for the regiment from my Lord of Ormond, and the result of this is you and the officers of the regiment are not to be trusted; if the Parliament believe this, they wil have cause to dispose of the regiment, so as they may be assured of it. The commissioners that do now go into Ireland are very honest gentlemen. Mr. Onslowe and Sir Robert King I know very well, and you shall do well to address yourself to them, that they may make good report of you hither. I have spoken with Ned Burgh at large when he was here; you shall do well to speak with him; take heed to yourself, and keep the good opinion of this place. There was one that answered to that, that you had a commission for the regiment sent from the Marquis of Ormond; that you were not to be blamed because that he might do it without your seeking; but it was certain that the Parliament was sent to, and desired to give you a commission. I have answered for Lieut.-Colonel Jones all that I could; you shall do well to speak with him, and I hope that he will satisfy the commissioners. If there be any officer whom you know to be disaffected to the Parliament, so that the putting of him out may be a good service, you shall do well to put him out, having told the commissioners of him." -- Rawdon Papers. The concluding sentence of this extract contains but a scurvy advice from a father to his son, and especially as the former had himself been "put out" of the same service not long before the date of this letter. The son became a wise man -- a philosopher, in fact -- and never hazarded the loss of his estates by any reckless adhesion to political conventions.

"Lisnagarvy, Lios na g-cearbhach, 'the gamester's fort,' is the present name of a townland adjoining Lisburn, and was also the name of the town until the middle of seventeenth century. In 1635 it was written Linsley Garvin. The MS. account of the battle of 1641 in the old Vestry Book is headed 'Lisnegarvey, 28th Nov., 1641.' The town may have changed name after its burning in that year. In the, charter of Charles II., 1662, it Is called Lisburne, alias Lisnagarvie. In Jeremey Taylor's 'Works' are 'Rules and Advices to the Clergy of the Diocese of Down and Connor, given at the Visitation of Lisnegarvey.'" In Story's "True and Impartial History" we have the following account of the tradition then prevailing (1691) in reference to the origin of this name:-- "And then on Monday, the second of September, we marched beyond Lisburn; this is one of the prettiest inland towns in the North of Ireland, and one of the most English-like places in the kingdom; the Irish name is Lishnegarvey, which they tell me signifies the Gamester's Mount; for a little to the north-east of the town there is a mount moated about, and another to the south-west; these were formerly surrounded with a great wood, and thither resorted all the Irish outlaws, to play at cards and dice: one of the most considerable among them having lost all, even his cloaths, went in a passion in the middle of the night to the house of a nobleman in that country, who before had set a considerable sum on his head; and in this mood he surrendered himself his prisoner; which the other considering of, pardoned him; and afterwards this town was built, when the knot of rogues was broke, which was done chiefly by the help of this one man; the town is so modern, however, that Camden takes no notice of it."


(This article was originally published in the Lisburn Standard on 19 July 1918 as part of a series which ran in that paper each week for several years. The text along with other extracts can be found on my website Eddies Extracts.)