Extracts from the Records of Old Lisburn XLV. 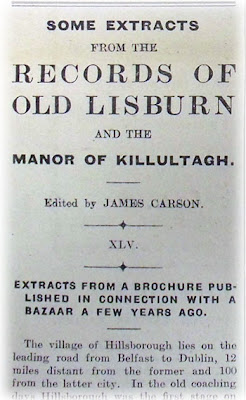 EXTRACTS PROM A BROCHURE PUBLISHED IN CONNECTION WITH A BAZAAR A FEW YEARS AGO.

The village of Hillsborough, lies on the leading road from Belfast to Dublin, 12 miles distant from the former and 100 from the latter city. In the old coaching days Hillsborough was the first stage on the Dublin journey from Belfast, where the hotel afforded stabling for the horses and excellent accommodation for the traveller. The former name of the parish was Crumlin or Cromlyn -- the crooked glen -- and the present town was built in the middle of the 17th century by Colonel Arthur Hill. Some years after, by a charter of Charles II., a Corporation was established, consisting of a sovereign, 12 burgesses, and an indefinite number of freemen, assisted by a recorder, a sergeant at mace, and inferior officers. This Corporation ceased to exist in 1832, but "The Corporation Seal" is still shown in the Parish Church, and the mace is preserved in the Castle. The borough returned two members to the Irish Parliament until the Act of Union in 1800.

Along with the building of the town Colonel Hill built in 1662 the first Parish Church. (A pre-Reformation chapel of ease to Drumbo parish existed, of which the ruins can still be seen in the demesne.) On its site, and still preserving parts of the walls of the nave and transepts, the first Marquis of Downshire built the present edifice in 1774. He superintended the work himself, and it was thirteen years in building. The materials and workmanship were of first-rate quality, so that today the walls and roof are in perfect order, the old oak pews remain, and the pulpit, with its quaint canopy and oak panelling is of much interest. The organ, one of the first in the North of Ireland, was supplied by John Snetzler, a well-known Belgian organ-builder of 100 years ago. It has been rebuilt on three occasions, but the old pipes and sound-boards of the Snetzler organ have been retained. There is a fine peal of eight bells, by Rudhall, of Gloucester, erected in 1773, with curious inscriptions, and in connection with them is an old carillon which plays tunes upon the bells at the hours of 12, 4, and 8. A company of bell-ringers is maintained by the Marquis of Downshire, who also provides the funds for a surpliced choir and organist. A beautiful chancel floor in Irish marble has recently been laid down by the Right Hon. Lord Arthur Hill in memory of his father, the fourth Marquis of Downshire. The vessels for the Holy Communion were presented by Mary, relict of Colonel Arthur Hill, in 1666. They are very beautiful, of solid silver, bearing the sacred monogram surmounted with a cross; beneath the letters are three nails, and the whole is encircled by rays.

Other memorials worthy of note are a brass eagle lectern, also presented by Lord Arthur Hill; a beautifully-executed monument of the fifth Marquis, by Forsythe, erected by his widow; and also one to Archdeacon Leslie, by Nollekins.

The Fort or Old Castle.

Standing on a slight eminence, adjoining the church and commanding the main road, is Hillsborough Fort, a redoubt built in the reign of Charles I. as a depot of arms when the country was in a disturbed state, and still in a state of good preservation. It is a square building with corner turrets, containing three or four apartments below stairs, and the first floor occupied by one large hall. It stands in the middle of the west side of a large square enclosure with high ramparts, and having a bastion at each angle, thus forming a redoubt. On the north side is a small tower or barbican, with an arch, which was formerly the principal entrance. The yard has on two occasions accommodated over three thousand. In 1690 the Fort was visited by King William III. on his way from Carrickfergus to the Boyne. He spent three days and three nights within it, and many Huguenot settlers of the locality joined his standard. Here he signed two very remarkable though widely differing instruments -- the grant of regium donum to Presbyterian Ministers, and the yearly grant of king's plate and incorporation of the Royal Down Corporation of Horse Breeders. After the Restoration the Fort was made a royal fortress by Charles II., who constituted Arthur Hill and his heirs hereditary Constables of Hillsborough Fort, with power to enrol Castle warders. This right the present Marquis retains, and it is an interesting sight and forms a strong link with the past to see the "Castlemen" march to church on Sunday mornings dressed in their quaint uniform. From the old Fort stretches

all the way around and containing 1,500 acres. It is well wooded, beech, oak, elm, and ash growing freely, and some very fine trees are to be seen. There is a fine lake beautifully situated, and the covers abound with game.

A smaller park, commonly called the demesne, surrounds the Castle, the present residence of the Marquis of Downshire. This mansion was rebuilt in 1843 by the third Marquis. The rooms are spacious, the library well stocked with books, and there is a fine collection of family portraits, from "Sir Moyses Hill" (the first of the family, who came to Ireland at the end of the 16th century) downwards. At the postern gate grows a fine old Cedar of Lebanon, which, tradition says, was planted by a Maginness centuries ago on his return from the Crusades. The whole district was owned and occupied by the Maginness clan in ancient times, and the present representative of the family, Lord Iveagh, takes his title from the name of the barony.

A short distance from the town, adjoining the Dromore road, upon the summit of a hill stands, a handsome column, surmounted by a large statue of the third Marquis. It is a striking and conspicuous object for miles around, and from its base a fine view can be obtained of the rich valley of the Lagan stretching from Moira to Belfast.

A bronze statue, by Lynn, of the fourth Marquis, stands in the principal street of the town, and is greatly admired for its lifelike character.

built in 1887, are large and well proportioned. There is a school for boys and girls and an infant school, with classrooms for each. In the infant school the kindergarten system is followed.

adjoins the Lisburn road at the entrance to the town. It was rebuilt and much improved in 1885. Attached to it are a schoolhouse and teacher's residence.

The Society of Friends

have a meeting house, with burial-ground attached, adjacent to the Park. In the demesne, in a secluded corner, the visitor is suddenly surprised by a small graveyard embowered in fir trees. It is the old burying-place of the Quakers in years gone by.

Dedicated to G. G. Tew, Esq., Manager of the Lisburn Branch of the Ulster Bank.

This interesting and valuable work comprises some 130 pages, and in addition to the history of the House of Downshire contains details of the founding of Tenant-right in Ulster.

According to the best authority to be had on the subject, it appears that at the close of the sixteenth century, and when England's Queen was well stricken in years, the soil of this island was little better cultivated than is the home  village of Belfast to the great seaport of Olderfleet (Larne), and for many miles of country on each side, was an almost interminable waste of furze and forest, with here and there a solitary farmstead, rude in construction as the wigwam of an Indian hunter. A few main roads there were, but the general mode of journeying was by bridle-paths, over which norsemen rode and pedestrians travelled, the carriage of merchandise being usually conducted by means of mountain-bred ponies -- a hardy race of animals capable of carrying great weights of goods on their backs at a pace of four or five miles an hour. Outside these pathways there was such a dense growth of elm, oak, and ash that one of the native Chiefs said -- "A man might almost make his way from MacAart's Fort to Lisnagarvey on the tops of trees."

About that time a soldier of fortune, Lieutenant-Colonel Moyses Hill, who, unaided by the influence of family power or official patronage, had made his way in the army by the force of his own prowess, was fortunate enough to attract the notice of her Majesty. The Hill family, of which the Lieutenant-Colonel was the sole representative, had at one time owned valuable property in Devonshire. In the reign of Henry the Fourth the Right Honourable John Hill, Judge of the Queen's Bench, possessed a handsome estate in that county, and his mansion at Hill's Court had been famed as a seat of old English hospitality. Sir Robert Hill, a cousin of the Judge, had also been very successful in the legal profession, and sat as Chief of the Common Pleas in the succeeding reign. This learned baronet became heir to the property of his cousin, which afterwards descended to his son John, a private gentleman, who resided at Hill's Court in Devon. It would appear that the next heir, Thomas Hill, Lord Mayor of London in the second year of Richard the Third's reign, had been an extensive merchant in that city. He added much to the family estate, and owned a mansion in Devon called Hillton. This gentleman died at an advanced age, and his successor, Robert Hill, came into possession of a very large property; but, being of a reckless spirit and fond of gaming, he continued with his elder son Edward to dissipate the property, and before the young lad Moyses came of age the entire inheritance had been sold, leaving the junior to push his fortune as best he could. Having early evinced a desire for military pursuits, young Hill entered the army of Queen Elizabeth in 1575, and for several years, was on active service in different parts of the European Continent. In course of his early career he had displayed so much celebrity in the field, and become so popular with his commander, that he was raised to the rank of major, and on his return to England in 1590 he had the honour of being presented to the Sovereign, and obtained the rank of lieutenant-colonel.

About that time the state of Ulster was one scene of anarchy. The rebellion of the Chiefs against all forms of British rule had become nearly general, and the head of the O'Neill dynasty, who was twice pardoned on his promise to surrender arms and let his followers betake themselves to rural industry, once again broke faith and took to the field. Lord Essex, Deputy-Governor of Ireland, sent a special messenger to London with despatches containing full reports of the continued tendency to outbreak on the part of the Chiefs. Colonel Arthur Chichester, a distinguished soldier, the descendant of a famous family in Devon; Sir Fulke Conway, of Conway Castle in Wales; and Lieutenant-Colonel Hill were selected, by the Queen to carry on with all possible effect the war against the native princes, under the command of the Earl of Essex.


(This article was originally published in the Lisburn Standard on 24 August 1917 as part of a series which ran in that paper each week through 1917 and into 1918. The text along with other extracts can be found on my website Eddies Extracts.)


Posted by an extract of reflection at Wednesday, August 24, 2011