Some Works Dealing With Hillsborough and Co. Down. 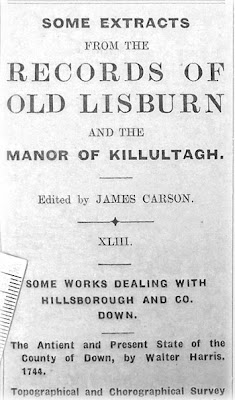 
SOME WORKS DEALING WITH HILLSBOROUGH AND CO. DOWN.


The Ancient and Present State of the of County of Down, by Walter Harris. 1744.

Topographical and Chorographical Survey of County Down, by Walter Harris. 1740.

Statistical Survey of the County of Down, by Rev. John Dubourdieu, Rector of Annahilt. 1802.

Belfast and Province of Ulster Directory. From 1882.

Reports from Commissioners on Municipal Corporations in Ireland. 1833.

1790 -- Anthems, &c, as performed in Hillsborough Church. The music composed by Michael Thomson, Mus.D., and others. (Words only.) 32 pages. No place or printer is given.

1790 -- A letter from Lord de Clifford to the Worthy and independent Electors of the Town of Downpatrick, with pertinent Queries to the Electors of the County of Down. (Charles Price.) 24 pages.

LINEAGE OF THE DOWNSHIRE FAMILY.

Colonel Moyses Hill of Devonshire was founder of the House of Downshire. He entered the army of Queen Elizabeth in 1575. Come, to Ireland about 1590. Received for his services some forty thousand acres of land in Down and two thousand in Antrim. He was knighted, died in 1630, and was succeeded by his eldest son, Peter Hill. Peter's only son, Francis, resided at Hill Hall, and died without male issue. Arthur Hill, younger son of Sir Moyses, then succeeded, and was created constable of Hillsborough Fort in 1660. Moyses Hill, son of Arthur, succeeded his father, and married his cousin, daughter of Francis Hill of Hill Hall, dying without male issue. Next in succession was William Hill, half-brother of Moyses. He married as his second wife Mary, eldest daughter of Sir Marcus Trevor, who was created Viscount Dungannon in 1662 for his signal gallantry in wounding Oliver Cromwell at Marston Moor. William died in 1693, and was succeeded by his eldest son, Michael. He married the daughter and heir of Sir John Trevor of Brynkinalt, Co. Denbigh. Next in succession was Trevor Hill, born 1693, died 1742, first Viscount Hillsborough, created in 1717 Baron Hill of Kilwarlin, and Viscount Hillsborough. Wills, only son of Trevor, born 1718, died 1793, was created Viscount Kilwarlin and Earl of Hillsborough in 1751, enrolled amongst the peers of Great Britain in 1756 as Lord Harwich, Baron of Harwich, in the County of Essex, and advanced to a British viscounty and earldom in 1772 by the titles of Viscount Fairford, County Gloucester, and Earl of Hillsborough. Created Marquess of Downshire 1789. His son Arthur, second Marquess of Downshire, succeeded; bora in 1753, died 1801. Arthur Blundell Sandys Trumbull, third Marquess, born 1788, died 1845. Arthur Wills Blundell Sandys Trumbull Windsor, fourth Marquess, born 1812, died 1868. Arthur Wills Blundell Sandys Roden, fifth Marquess, born 1844, died 1874. Arthur Wills John Wellington Trumbull Blundell, the sixth and present Marquess, was born in 1871. He married in 1893 Katherine (from whom he obtained a divorce in 1902), daughter of Hon. Hugh Hare, Berks; issue, two sons and one daughter. Married secondly (1907) Evelyn Grace Mary, daughter of E. Benson Foster. Clerver Manor, Windsor.

To commemorate the public and private virtues of the Most Honourable Arthur Wills Blundell Sandys Turnbull Hill, third Marquis of Downshire, Lieutenant of the County of Down, Colonel of the Royal South Down Regiment of Milita, and Knight of the Most Illustrious Order of St. Patrick. Alike distinguished for patriotism, rectitude of principle and honesty of purpose, upholding his station with becoming dignity. He was also mindful of the wants of others, and practised those duties with benevolence and humility, which won the regard of every generous mind, adding lustre to his exalted rank. Those who best knew his worth and admired the rightness of his character and conduct in the several relations of life have erected this monumental column as a token of their friendship and esteem. 1848.


Mural tablet in the Presbyterian Church:--

Erected in memory of Revd. Galbraith Hamilton Johnston, by the members of the congregation of Hillsborough, who laboured among them for years.
He was an earnest preacher, a devoted pastor, and a true and faithful friend. Installed 30th September, 1858:

Sir Robert Hart, of Chinese fame, was connected with Hillsborough, having lived there during, his early boyhood. According to Juliet Bredon, his biographer, he was born in Dungannon Street, Portadown, in 1885, and when two years of age his parents removed to Hillsborough.

REPORTS FROM COMMISSIONERS ON MUNICIPAL CORPORATIONS IN IRELAND, 1833.

King Charles II., by charter 1662, granted to Arthur Hill, that the lands in that charter named should be a Manor by the name of the Manor of Hillsborough, and by the same charter ordained that 100 acres of land, in the town and lands of Hillsborough, should be a free borough and corporation, and be called the Borough and Town of Hillsborough, "the said town already built, or to be built, erected, and made in the most convenient place of the said 100 acres."

These 100 acres have not been set out, but are supposed to be the 100 acres lying in a circle round the Market House of the borough, as a centre.

There is a book in the hands of the Sovereign of Hillsborough containing entries of the proceedings from 1773 to the present year, 1833.

The corporate name is "The Sovereign, Burgesses, and Free Commons of the Borough and Town of Hillsborough."

The corporation, by the charter, consists of a Sovereign, 12 burgesses and freemen.

The "Recorder and Town Clerk" is the only inferior officer appointed.

The right of election is placed by the charter in the entire body. The Sovereign is to be elected out of the burgesses.

The election to the office of burgess is exercised in point of form by the remaining burgesses, but, in truth, all are the nominees of the Marquis of Downshire, the heir of Arthur Hill.

The Marquis of Downshire is the "patron" of the corporation, and received the compensation for the disfranchisement of the borough at the period of the Union, amounting to £15,000.

The office of burgess is considered of little importance. They are not sworn on admission.

The entire number of the burgess is kept up. Only two of tho burgesses are resident.

There are not at present any freemen, except Lord Talbot and a few of his friends.

The Sovereign is made coroner within the borough. He also acts as justice of the peace "within the bounds and lymitts of the sayd town and precinctes thereof" during his term of office and for the space of one whole year thereafter.

There is no salary or emolument of any kind attached to the office of Sovereign. The Marquis of Downshire gives twenty guineas annually to the Sovereign to entertain the burgesses upon the days of election and swearing-in.

Two places called "Black Holes" have been used as temporary places of confinement; a district bridewell is in process of building.

There are also notes on privileges and rights of other members of the corporation. Court Leet, Seneschal, Manor Courts, Quarter Sessions, Petty Sessions, Constabulary, the Streets, Schools, Weighmaster and fee, &c., &c.

Fairs to be held in Hillsborough on the first Wednesday of every month, between the 1st March and last of November; and a market every Thursday, with a court of Pie Poudre.

THE POST CHAISE COMPANION OR TRAVELLERS' DIRECTORY THROUGH IRELAND, 1803.

This volume (660 pages) is very meagre and uninteresting in its references to Lisburn and district. It mentions that "Lisburne gives the title of Earl to the noble family of Vaughan." The Vaughans were an ancient Welsh family tracing in direct line back to the year 1200. Viscount Vaughan was created 1776 Earl of Lisburne and Lord Vaughan.

The following reference to Hillsborough is the only extract worth quoting:--

HILLSBOROUGH is pleasantly situated and almost newly built, much in the style of an English town, on a healthy, gravelly soil, in view of Lisburn, Belfast, the bay and town of Carrickfergus, and commanding an extensive prospect of a well-improved country. The Mase course is a mile north of the town, near the banks of the Lagan. A rising hill in the middle of the course, about two miles in circumference, affords a full view of the whole field. The Church of Hillsborough is magnificent, and cost the first Marquis of Downshire near £15,000. The spire is as lofty as that of St. Patrick's, Dublin, and much more elegant; it has also seven painted windows. There is a small castle or fort at Hillsborough, in perfect repair, in which were deposited the arms of the county. A very thriving manufacture of muslins has been introduced into this town under the patronage of the first Marquis of Downshire. The present Marquis has a fine demesne and neat villa here.


(This article was originally published in the Lisburn Standard on 10 August 1917 as part of a series which ran in that paper each week through 1917. The text along with other extracts can be found on my website Eddies Extracts.)


Posted by an extract of reflection at Wednesday, August 10, 2011