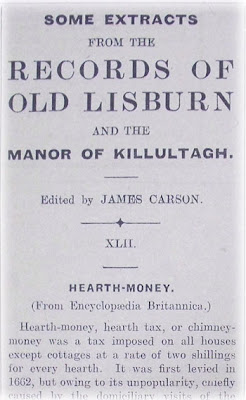 Hearth-money, hearth tax, or chimney-money was a tax imposed on all houses except cottages at a rate of two shillings for every hearth. It was first levied in 1602, but owing to its unpopularity, chiefly caused by the domiciliary visits of the collectors, it was repealed in 1689. The principle of the tax was not new in the history of taxation, for in Anglo-Saxon times the King derived a part of his revenue from a "fumage" or tax of smoke farthings levied on all hearths except those of the poor. It appears also in the hearth-penny; or tax of a penny on every hearth, which as early as the 10th century was paid annually to the Pope, and became popularly known as "Peter's pence."

An Act of Parliament, Charles II., 1662 -- Imposes a tax of 2s each on every hearth and other place used for firing and stoves within every dwelling and other house and edifice that are or hereafter shall be erected within this Kingdom of Ireland other than such as are in this Act hereinafter excepted. Persons living on alms exempted, and all houses certified by two justices to be not of greater value than 8s upon the full improved rent, and that the persons occupying the same do not have, use, or occupy any lands, or tenements of the value of 8s per acre, or have any lands, tenements, goods, or chattels of the value of £4 in their own possession, or held in trust for them.

Houses having no fixed hearth, with chimneys, chargeable with two hearths.

The original lists or rolls for County Antrim are in the Record Office, Dublin. A copy is in the possession of the Presbyterian Historical Society, Belfast. From this copy J. W. Kernohan, M.A., extracted the names relating to Lisburn Parish and Town, as here given. Where a number follows a name it indicates the number of hearths, stoves, ovens, &c., taxed. In all other cases there was one hearth only. These rolls are obviously an index to the social status of the inhabitants of the period, the number of hearths taxed indicating the social position or wealth of the individual, Sir George Rawdon heading the list with 39.

It is rather curious that Sir George Rawdon's name appears as occupying the Castle, Lisburn, and not the name of Baron Conway, as there can be no other means of accounting for the 39 hearths than locating them in Baron Conway's Castle, in the Castle Gardens. Sir George Rawdon was the ancestor of the Earls of Moira. He married in 1654 as his second wife Dorothy Conway, sister of the second Viscount Conway. We find Rawdon in 1654 building a house in Lisburn, and this is possibly the house that appears against his name for 3 hearths. He died in 1634, and was buried in Lisburn.

The third Viscount Conway succeeded to the estate in 1665, and died in 1683. He built the Castle at Portmore, on the shores of Lough Neagh, in 1664. It was pulled down in 1761. This was his favourite residence, and was much more splendid and extensive than the Castle at Lisburn. His Lordship spared neither time nor expense in adorning and beautifying it, and the grounds were stocked with ail kinds of rare animals, birds, trees, and shrubs. Sir George Rawdon may therefore have been temporarily in occupation of Lisburn Castle in 1669, thus accounting for his name appearing in the Hearth-money rolls for that year. Indeed, it would appear that after Portmore Castle was built the Lisburn Castle was neglected, and rarely, if at all, occupied by Viscount Conway. We find from "Bonnivert's Journey, 1690," that in that year Lady Mulgrave was in occupation. "There is a great house and good gardens at Lisburn belonging now to my Lady Mulgrave. The house is out of repair." "Bonnivert's Journey," is given in the Ulster Journal of Archæology, vol. 4, 1856. He was a French refugee who followed the fortunes of William III.

It is noticeable, and rather unusual, compared with other districts, the large number of names appearing in the Parish of Lisburn as paying tax on more than one hearth. The inference, of course, is that in 1669 the town of Lisburn, although small, must have had within its bounds a number of people of comparative wealth, and in the immediate neighbourhood, comprising the parish, there must have been, a considerable population in comfortable circumstances. Story, a chaplain in Duke Schomberg's army, writes of it twenty years later, in 1689:-- "One of the prettiest inland towns in the North of Ireland, and one of the most English-like places in the Kingdom."

Unfortunately, the names in the Hearth-money rolls for 1669 are given as a whole fOR "Lisbourne Parish and Towne," no differentiation being made as between the town and country, nor are the names of the townlands included in the parish stated. The parishes of Lisnagarvagh and Blaris were united about the year 1641, the combined parishes forming what is now known as the Parish of Lisburn. This amalgamation causes some uncertainty as to what townlands were included in the 1669 rolls, as up to the present time frequently the two parishes are treated as if they were still distinct.

On a map of the Hertford Estate dated 1833 the Parish of Lisburn is described as containing the townlands of Broughmore, Lurganure, Lissue, Knockmore, Tonagh, Old Warren, Blaris, Ballentine, Taghnabrick, Largymore, Ballymullen, and Lisnagarvagh, all being included in the Hertford property and in the vicinity of the town. It is a fairly reasonable assumption that these, are the townlands included in the Hearth-money rolls for the Parish and Town of Lisburn for 1669.


(This article was originally published in the Lisburn Standard on 3 August 1917 as part of a series which ran in that paper each week through 1917. The text along with other extracts can be found on my website Eddies Extracts.)


Posted by an extract of reflection at Wednesday, August 03, 2011