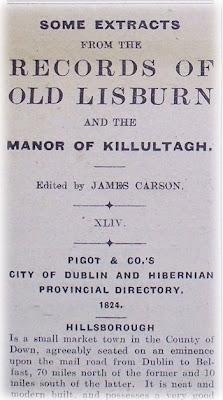 Is a small market town in the County of Down, agreeably seated on an eminence upon the mail road from Dublin to Belfast, 70 miles north of the former and 10 miles south of the latter. It is neat and modern built, and possesses a very good market, principally for linen yarn. The public buildings here are very handsome, and give an air of respectability not usually possessed by a small town. The church is a very elegant building, consisting of a nave and cross aisles; the tower is 110 feet high, and the steeple 100, forming together a most beautiful piece of workmanship, which may be discerned at a considerable distance; there are also two smaller towers at the sides. The interior corresponds with the exterior, every window being adorned with stained glass; it has a good organ, and a monument by Nollekens to the memory of Archdeacon Leslie is well worthy of attention. The market and courthouse is a large stone building adorned with a clock and vane, and admirably calculated for the purposes of its erection. The other public buildings are the shambles, and two neat schools; but the meeting-houses are situated at some distance from the town. The charitable institutions are a dispensary, open every Wednesday and Saturday, and a school for children of both sexes, conducted on the modern system of education, founded by the Marquis and Marchioness of Downshire, supported by subscription, and attended by about 80 boys and 50 girls; Mr. Francis Ford is the master, and Mrs. Margaret Ford the mistress. There is also an extensive Sunday School patronised by the Marquis and Marchioness. In the adjoining parish of Annahilt is a school founded by Thomas Jameson, a merchant of Belfast, for the benefit of this his native parish; he liberally endowed it with £l,000, which are placed out at interest upon landed property, and the noble Marquis granted four acres of land, upon which the school house stands; 130 boys and 90 girls upon an average attend; Mr. Robert Forsyth is the master, and Mrs. Margaret Forsyth the mistress. Hillsborough contains the noble mansion of the Marquis of Downshire, to whose family this town gives the title of Earl; the Marquis is the proprietor of this place, and also possesses vast estates in the neighbourhood. This town was a borough before the union, and sent two members to the Irish Parliament. Here is a small ancient castle, still kept in repair, of which the Marquis is governor. The quarter sessions are held here; the market day is on Monday, and there are fairs on the third Wednesday in February, and the third Wednesday in May, the third Wednesday in August, and the third Wednesday in August, and the third Wednesday in November. The population is about 1,200.

BELFAST, the Royal Night Mail, every morning at eight, from the Corporation Arms, by the same route, and returns every evening at half-past six.

BELFAST, the Fair Trader, every evening at seven, from the Downshire Arms, by the same route, and returns every morning at seven.

BELFAST, the Shamrock, every Tues., Thurs., and Sat. evening at half-past seven, from the Coach and Horses, same route, and returns Monday, Wed., and Friday, at 40 minutes past five.

DUBLIN, the Royal Day Mail, every morning at half-past six, from the Corporation Arms, through Dromore, Banbridge, Loughbrickland, Newry, Dundalk, Castle-Bellingham, and Drogheda, and returns every evening at half-past seven.

DUBLIN, the Royal Night Mail, every evening at half-past six, from the Corporation Arms, by the same route, and returns every morning at eight.

DUBLIN, the Fair Trader, every morning at seven, from the Corporation Arms, by the same route, and returns every evening at seven.

DUBLIN, the Shamrock, every Monday, Wed., and Friday morning, at twenty minutes before six, from the Coach and Horses, and returns every Tuesday, Thursday, and Saturday evening at half-past seven.

BELFAST, a Caravan every Wednesday and Saturday, at seven in the morning, takes goods for Lisburn, from the Corporation Arms.

BELFAST, a Waggon every Tuesday and Friday, from Mr. Harrison's, and takes goods for Lisburn.

DUBLIN, a Caravan goes every Monday, and Thursday afternoon, at half-past four, from the Corporation Arms, and takes goods for Dromore, Banbridge, Loughbrickland, Newry, Dundalk, Castle-Bellingham, and Drogheda.

DUBLIN, a Waggon every Monday and Thursday, from Mr. Harrison's, takes goods for the same places.

On the evening of the 19th of June, 1690, William and the Williamite forces arrived in Hillsborough, nothing remarkable having occurred during the march from Lisburn. The town, which, was then, and still is, the property of the titled family of Downshire, whose name it bears, was incorporated by charter of 14th Charles II., and the Corporation was styled "The Sovereign, Burgesses, and Free Commons of the Borough, and Town of Hillsborough." Its political history is very interesting to the loyal men of Ulster. There the Council of the Antrim Association met at stated times, in 1688, and deliberated in regard to the means to be adopted for the defence of the lives, liberties, and properties of the Protestants of the North. There, also, had been Schomberg and his army, on Tuesday, the 3rd of September, 1689, on their way to Loughbrickland. And a weary way it was; for what the Protestants spared in the flight from their homes the Jacobites destroyed, so that in the district not a sheep nor a cow was to be seen; the track of Schomberg and his men was through ruin. Now the King himself and his forces had arrived. As already stated, the castle had been prepared to receive and accommodate his Majesty. It was a magnificent structure, built by Sir Arthur Hill in 1641-2, and consisted of four bastions. Bonnivert describes it as "a great house belonging to the King, standing on a hill on the left hand of the road;" and in a certain sense the Frenchman was right. The site was chosen so that the fort might command the Pass of Kilwarlin, the chief road between Belfast and Dublin. Accordingly, it was strongly fortified within, and had the additional strength afforded by a trench. At the close of the year 1660 it was made a Royal garrison, and placed in command of a Constable, who received 3s 4d a day, having under him twenty-four warders who pay was each 6d a day. The constableship was vested in the Hill family for ever.

As might be expected, the old Castle in the demesne is much venerated by loyal men. There his Majesty remained two days, and strangers are still shown relics of the Royal visit. They have pointed out to them the apartments he occupied; the chair on which he sat; the table on which he wrote his Orders; the window opposite which chair and table stood; the bedstead on which he slept; the stable in which his horse was put up; the situation of the gardens, and the direction in which he walked -- in fact, everything is to be seen but the King himself. More interesting than the silent witnesses is the testimony borne by the successors of the original warders. They are regularly on duty at the new Castle of Hillsborough, wearing the uniform, somewhat modernised, of the Dutch Guards -- blue coat with red lappels; cocked hat trimmed with white lace, and for plume a red feather; white breaches and gaiters.

From the Court at Hillsborough his Majesty issued two important documents. One was a Royal Warrant, addressed to Christopher Carleton, collector of customs at Belfast, authorising the payment of £1,200 yearly to the Presbyterian ministers of Ulster. This is understood to be the origin of the grant called "Regium Donum." The pension was inserted in the Civil List and made payable out of the Exchequer.

George Story, chaplain to the Earl of Drogheda's Regiment, relates in his "Impartial History" that -- "On Tuesday, 3rd September, 1689, Schomberg's army marching through Hillsborough, a place where the enemy before our coming had kept a garrison, near which, on the highway side, were two of our men hanged for deserting. That night we encamped at Dromore."


(This article was originally published in the Lisburn Standard on 17 August 1917 as part of a series which ran in that paper each week through 1917. The text along with other extracts can be found on my website Eddies Extracts.)


Posted by an extract of reflection at Wednesday, August 17, 2011