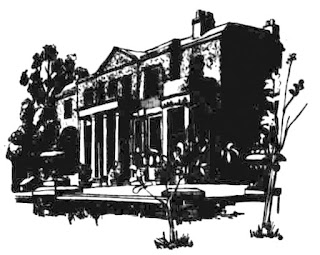 Down mansion has link with Nelson and Trafalgar

THE autumn winds blow softly around Clandeboye, and the great trees in the demesne are still heavily green. Only on the house itself do the glowing reds of the embracing creeper reveal in their richness the year's decay.

The fortunes of the various owners of the Clandeboye lands have risen and fallen through the centuries. Throughout those troublous days when de Courcys fought de Laceys, Clandeboye belonged to the O’Neill clan.

Con O'Neill forfeited his inheritance to James Hamilton, schoolmaster and secret agent In the time of Ehrabelh I. His grandson, the first Earl of Clanbrassil, married, contrary to his mother's wishes, Lady Alice Moore, daughter of the Earl of Drogheda.

It was said of Lady Alice, at tho Court of Charles II. that "she thinks to trip up Nell Gwynn's heels."

Whatever her success, or lack of it, with King Charles, her husband was sufficiently dominated by her to make her his heiress, much against the advice of his kinsfolk. Events proved their misgivings justified, for three months after the signing of the will, the infatuated husband died in most mysterious circumstances. The will was disputed and the properly divided.

Plain John Blackwood became Sir John in 1763. He was the father of eleven children, seven of whom were sons. His fourth son, Henry, entered the Navy and as Capt Blackwood commanded the 36-gun frigate "Penelope" in the Napoleonic Wars. The "Penelope,” under his command gave chase to the 80-gun French ship, "Guillaume Telle," and by clever seamanship crippled and held her until the English Fleet arrived when the French admiral commanding the "Guillaume Telle” surrendered.

Later, Capt. Blackwood commanded the frigate "Euryalus” while the English fleet was off Trafalgar. The log of this ship was printed by the Navy Records Society as containing "a complete history of the Battle of Trafalgar."

It was aboard the “Euryalus" that the body of Nelson was borne to England for burial.

Some time after the Clandeboye lands passed into the Blackwood family, the small two-storied house that stood thereon had low wings added on either side. In 1800, James, Lord Dufferin, raised and enlarged the house and his wife laid out the gardens.

The first Marquis of Dufferin and Ava, later to become Viceroy of India, changed the entrance, added several rooms, cut down the encroaching trees to enable the surrounding hills to be seen from the house, and created the 60-acre Clandeboye lake which to-day supplies the people of Bangor with water.

Next week: Florida Manor, Co Down.