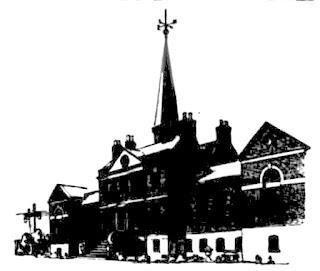 Where Belfast’s hospitals had their beginning

PASSING through the scrolled gates of Clifton House, one leaves behind the roar of traffic and town and enters a quiet backwater of life. Tall green hedges form a background for the vivid flowers bordering the driveway, and also guard stretches of velvety turf, most pleasant to look upon from the windows of the quiet sitting rooms.

Clifton House is Belfast's oldest public building, having been erected in 1772, and it has all the dignity of line, and the mellow charm of the Georgian period. Its wide and welcoming doorway leads into a spacious reception hall whose very furnishing tells tales of the building's origin. Here are half-moon tables of the Sheraton period, flanked by a gracefully elegant sideboard, and chairs which a collector of antiques would eye enviably.

The House was founded by the Belfast Charitable Institute, which came into being in 1752. On August 25 of that year, Margetson Saunders and other residents of the city met to consider a proper way to raise a sum for the building of a Poor House and Hospital and a new church, in or near the town of Belfast

These citizens decided to issue 100,000 lottery tickets at half-a-guinea each, the chances thereof to depend on the Dublin lottery. This did not prove a very good way of raising money, and many of the tickets were unsold. One of them, framed hangs on the wall of the Board Room at Clifton House. There was a further issue of lottery tickets a year later, this time on a London lottery, and money gradually rolled into the great iron-bound box which had been purchased to hold the funds.

By 1767 there was £1,614 2s in the box, and plans began to go forward. The site was to be "on the North-West side of the road leading to Carrickfergus." On August 1, 1771, the foundation stone was laid by Stewart Banks, Sovereign of Belfast.

In many ways the founders of the Institute made themselves responsible for tasks which today are undertaken by the local government. At the end of the eighteenth century many beggars roamed the streets, some of them genuinely distressed, others little better than strolling criminals who terrorised the community.

As a deterrent to the latter, the Founders decided to have a place fitted up at Clifton House as a "black hole," and the blocked up window still exists. Later, the Beadle, attended by two of the ablest inhabitants of the House, patrolled the town twice a week to apprehend any strolling beggar. The Beadle and his attendants carried staves, and wore scarlet-collared cloaks, being known to the citisen* as the "Bang-beggars."

The Institute opened its doors to children in 1776. appointing a Master and Mistress to undertake their education in the "3 R's," and in some occupation that would help them earn their livelihood.

Of the many methods used to raise money for the charity, perhaps the most outstanding were the performances by Sarah Siddons, given at her own request. A small portrait of the "Divine Sarah" hangs in the Board Room.

The Founders' undertaking to supply the city with piped water, and the guarding of the burying ground against body snatchers are other noteworthy incidents in the Institute's long history. Mementos of these episodes, too, stand in the Board Room – the hollowed tree trunks which were the first water pipes, and the old flintlocks with which the guards were armed.

To-day, Clifton House is a haven for 144 old folk, who whilst they are largely self-supporting in a financial sense, are unable to live alone. Under the Institute's hospitable roof is a centenarian, and next year, all being well, two more of Clifton House residents will see their 100th birthday.