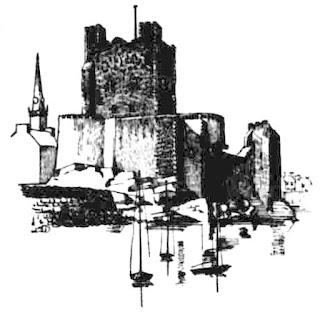 The Captains and the Kings have gone

IN those days whose history is blurred to vision, when London was merely a Celtic settlement in a clearing of the primeval forest, there was habitation around the place we know as Carrickfergus.

Tradition has it that King Fergus came here to drink the waters of that well now guarded in the square keep of the Castle, and, when he was drowned in a storm off the rocky promontory, his name was given to the place — Carrickfergus, Rock of Fergus.

Centuries afterwards John de Courcy chose to establish a colony here, having been granted the lands of Ulster when Henry II joined England and Ireland. Among the families that clustered about the Castle at the close of the twelfth century were Sendalls, Russells, Whites, Bensons, Jordans, Copelands and Savages - names we still hear in Ulster and whose bearers can trace their ancestry through the intervening centuries.

There was no peace for Ireland in the two decades that followed the colony's establishment De Courcys fought de Laceys and the Irish chieftains fought both. When, in the 13th century, there was a general uprising, King John himself journeyed to Ireland to subdue, among others. Hugh de Lacey.

King John stayed at Carrickfergus, and the chapel where he worshipped still stands, its arched windows giving an ecclesiastical air to the lofty barrenness of this room beside the portcullis.

From Carrickfergus King John wrote in 1210: "And when we were at Cracfergus, that castle being now taken, a certain friend and relation of ours from Galweya, named Duncan de Karge, informed us that he had taken prisoners Matilda and her daughter the wife of the son of Roger Mortimer), and William the Younger and his wife and two sons. But Hugh de Lacey and Reginald du Breosa had escaped."

Matilda offered 4,000 marks for her husband’s life, but notwithstanding this offer, and a curious gift of 400 cows and one bull, all white save for red ears, she and her family were taken in chains, to Windsor, where they perished of hunger.

The Castle of Carrickfergus has held other prisoners, among them Con O'Neill, who, at the beginning of the 17th Century, was Irish overlord of the Ards peninsula. Con O'Neill and his family at Christmas, 1603, had a grand debauch at Castlereagh.

Having emptied the wine cellars, Con sent his servitors to Belfast for replenishments. However, on the return journey the O'Neill servants were waylaid near Knock Church by English soldiers, and lost the fresh supplies of wine. Their master, heaping scorn upon them for being beaten by the English, sent them again to Belfast. This time the O'Neill servants beat the English, and killed several of the soldiers. For his part in the affray O'Neill was confined in Carrickfergus Castle.

Con O’Neill had a resourceful wife, however. This good lady hired a boat from Bangor and brought for the prisoner two cheeses, the centres of which had been hollowed out and filled with cords. On the next fine night Con let himself down from the Castle and escaped in the waiting boat to Bangor, where he hid himself in the church steeple.

To-day only the feet of curious tourists sound over the cobbles of the ancient Castle that for eight hundred years has kept watch over Belfast Lough, but inside the battered walls there lies a happier dwelling place.

Against one of the inner walls that front the cobbled courtyard a long low house has been built for the caretaker and his wife. Within this minuscule dwelling is a shining brilliance that contrasts strangely with the crumbling castle. Jewel-bright brasses wink from the sparkling dresser, the shining old-fashioned stive gleams with an ebony lustre, and all about the tiny home is the clean, sharp tang of the sea. The captain and the Kings have gone but the people yet remain.

Posted by an extract of reflection at Tuesday, January 19, 2021