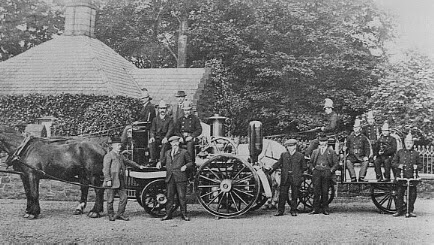 'Twas a stormy winter evenin' at the back en' o' the year.
We were sittin' at the station, smokin pipes and dhrinkin' beer.
When a telephone message came along the private wire.
That the Fire Brigade was wanted for the village was on fire.

So we begged a box o' matches, an the engine fires we lit,
An' we had a glass o' whisky when the wather boiled a bit.
We borrowed Mickey's oul blind horse that didn't shy at light.
An' well within three hours we'd set out, the flames to fight.

Now, Mickey's was an oul'ish horse, and sure he's quite forgot.
The way a horse should gallop, an' he'd never learned to trot;
He had a funny gait with him, an action all his own.
'Twas somethin' between walkin' slow, an' leavin' it alone.

That's how he went on level groun', but when he had to clim',
Av coorse we all got out to help the craythur ivery time;
We used to tie him on behin' when goin' down a hill,
For fear we overtook him. He was best at standin' still.

That's why at fires we always sent a lad in front to say
They might expect us any time, for we were on our way,
We hadn't got far on our way when we shouted out "Bedad.
It's Mrs Dooley's shanty, an' the chimney's smokin' bad."

An' Mrs Dooley, decent sowl, was stannin' at the door;
We swore we'd save the woman's life, if we could do no more.
We didn't go inside for fear the smoke would make us cough,
But we showered on Mrs Dooley till we pumped the water off.

Then Mrs Dooley disappeared she hasn't since been found.
An' some there are who'll tell ye they believe that she was dhrowned.
But we played upon her shanty till we'd washed it clean away.
An' where the pigsty used to be there is a lake this day.

We called on Pat O'Rafferty, an' foun' the boy in bed.
So we woke him up and toul' him he was just as good as dead.
An' he clim'd out o' the windae though he hadnt much to wear.
An' then shinned down the wather spout, while we came down the stair.

By this the population was awake, and cryin' out like mad,
An' throwin' out the windaes ivery blissed thing they had;
'Twas risky work for us below, but with undaunted heart
We picked them up an' hid them safe inside the salvage cart.

There were people sittin' on the roofs o' ivery house in town.
An' so we threw up ropes to them, an' then we pulled them down.
We dived into the cellars: we were boys that knew no fear,
An' we saved ten jars o' whisky an' a cask o' bitter beer.

Then when we reached the lawyer's house he asked us for a match.
Because he was insured an' feared it mightn't catch;
But he wouldn't stan' us anything, and so we hung about
Till he got the fire well alight, an' then we washed it out.

An' then we tried the public house, though it hadn't got alight,
But we went inside the tap-room tae be there in case it might.
They said there was no danger, but we thought at any rate
As precautionary measure that we'd play upon the slate.

So when we'd washed the slate quite clean, an' wiped off all the score,
We spent the night in dhrinkin' there an' runnin up some more:
An' when the score we're running' now has got a little higher,
Well bring the engine roun' again an' have another fire.


While the origin of this rhyme is uncertain it relates to a time when the town commissioners of any sizeable place in Ireland had their own part-time brigade. The horse-drawn vehicles would have had hand pumps. And their crews would often have been the butt of ridicule.

Posted by an extract of reflection at Thursday, June 26, 2014

Email ThisBlogThis!Share to TwitterShare to FacebookShare to Pinterest
Labels: poetry