THE Church Lads' Brigade is an Incorporated Society numbering about 50,000 members, in all parts of the world, and having for its object "the Advancement of Christ's Kingdom among Lads of all classes."

By means of a military discipline and drill, extending if possible over five or six years (or from thirteen to nineteen years of age), it teaches lads to be obedient, punctual, cleanly, and smart. By encouraging healthy and manly exercise it improves their physical condition, and by enforcing attendance at Sunday School and through the teaching of its chaplains, it aspires to lead them to be true Christians. Ends such as these, it is evident, cannot be attained suddenly -- quite the reverse -- the lessons which the Brigade teaches are learnt almost insensibly, and it must be so, if they are to form a part of what is known as one's character; indeed, in the fact that the Brigade is an environment which enters into the daily life of its members, lies its great strength.

During a year about a hundred ordinary parades are held, besides numerous football matches, social club meetings, and drill competitions, with perhaps a week's camp, so that a considerable amount of a member's time is spent in the Brigade, its influence being steadily brought to bear on him till in time its principles become his principles, and its ideals his ideals.

What, then, are the potent influences of the Church Lads' Brigade System? Briefly, Example, Esprit de Corps, and Emulation. Since there is no means of punishment, there are practically no commands; therefore obedience is voluntary; but it would be a mistake to suppose that everything a member is asked to do is pleasant. Frequently he has to undertake duties which are most distasteful. Why, then, does he perform them? If he be a private, probably from force of an example set or from force of habit. If a corporal, sergeant or lieutenant, because it is his privilege to set that example. In the same way habits of cleanliness, punctuality, and smartness are acquired. Much care is taken to cultivate an esprit de corps such as exists among the regiments of the army. Each lad is taught to remember that he is a member first of the great society called the Church Lads' Brigade, and must endeavour to be a credit to it and its uniform, and next by individual good conduct, smart appearance, obedience, and proficiency in drill, he must help to make his company the best in his district.

As all promotion is for good conduct, good drill, good attendance, good character, a healthy spirit of rivalry exists -- each private aspires to be a sergeant, and knows that his promotion depends upon himself; and drill and gymnastic competitions are also frequent, and prizes given, and in these classes there is always keen competition.

It is just five years since the local company of the Church Lads' Brigade was enrolled. During that time many changes have occurred, both in the number and ranks of its members. It is very gratifying, however, to note that of the first six privates enrolled, three now hold the rank of lieutenant, and one of sergeant. The predictions of the then officers with regard to one of those privates were not destined to be fulfilled. "He'll not stay long," said one. " If he does, we'll have nothing but trouble," said another. And at first the lad was troublesome. Slowly, however, he became interested, attended regularly, became steadier, and was made corporal. Since then, by steady stages, he has risen to his present rank -- a good example of the result of five years' service; and only by such lengthened service can lasting and real effect be produced. It is folly to suppose that if a lad is cleaned up and supplied with a cap, belt, and haversack, he is reformed; such a result can only be attained after some years of continuous and careful training.

Such, then, are the benefits a lad may derive from five years' service in the Church Lads' Brigade. 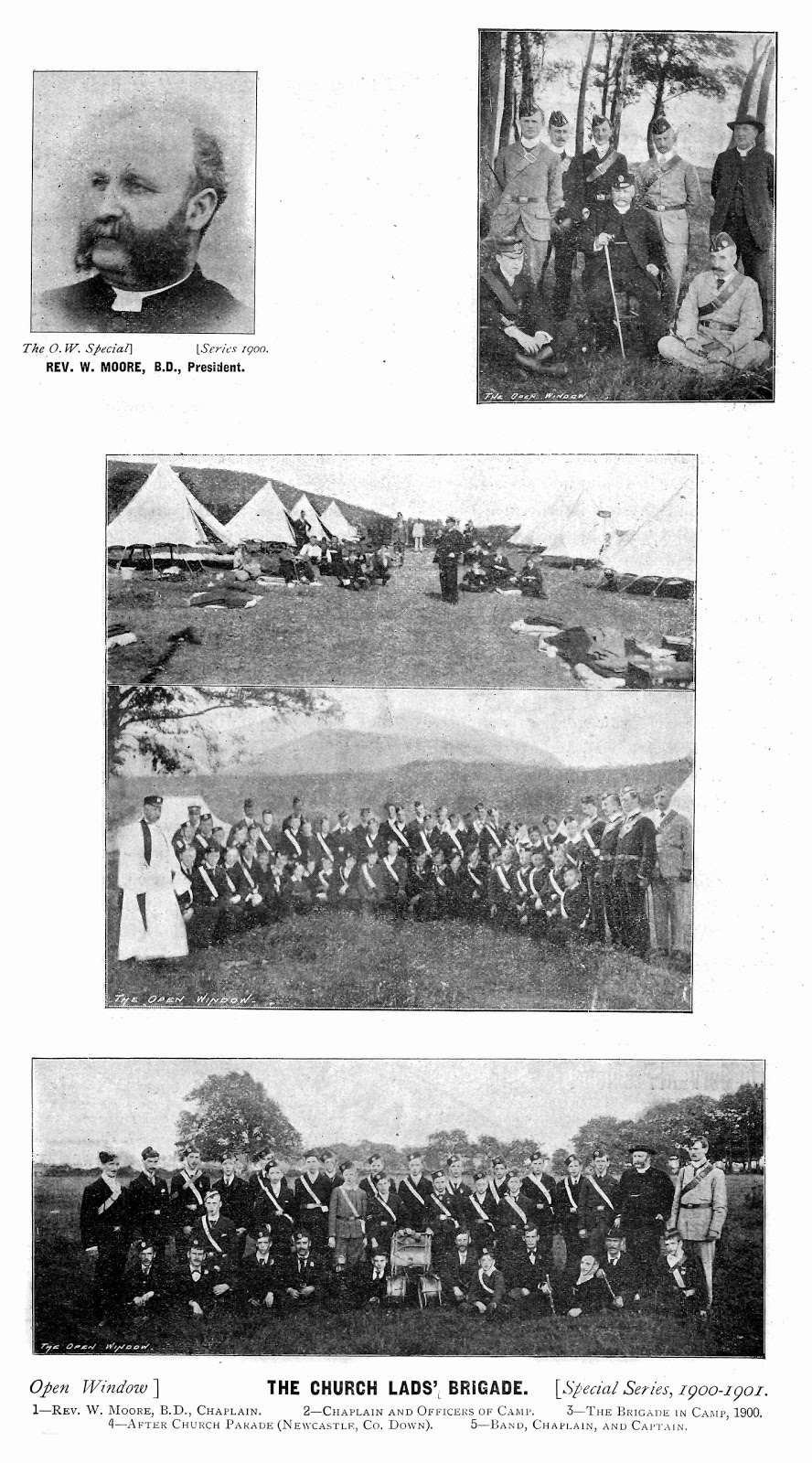 This article was originally published in "The Open Window Illustrated - Literary Annual and Year Book of Local Annals" in 1900 which was centred on the Newry area.
Posted by an extract of reflection at Thursday, June 19, 2014