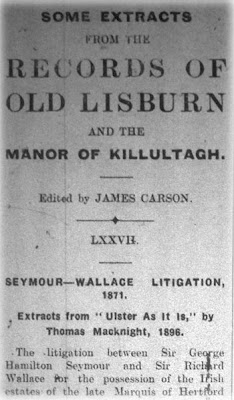 
The litigation between Sir George Hamilton Seymour and Sir Richard Wallace for the possession of the Irish estates of the late Marquis of Hertford was proceeding. The Irish Court of Common Pleas gave a judgment in favour of Sir George. This was in confirmation of a verdict delivered with great reluctance by the jury, according to the direction of the Judge of Assize is Belfast. Notice of appeal was, however, immediately given, and in the Ulster newspapers advertisements appeared cautioning the tenants not to pay any rent to the defendant, who had obtained the judgment in his favour. The tenants, a very large body, in and around Lisburn, were in a state of great perplexity. The agent of the estate, Walter T. Stannus, who up to this time had acted in a neutral capacity between the litigants, thought that the judgment of the Court of Common Pleas was irrevocable. He at once acted as Sir Hamilton Seymour's representative, and thus placed himself in a position towards Sir Richard Wallace he had afterwards much reason to regret. The Ulster tenant farmers generally watched the progress of this great case with much interest. It was for the time the general topic of conversation. Some of those on the estate were perhaps not disinclined to profit by the opportunity of not paying their rents. They were, however, very earnestly advised by a newspaper in their confidence that they might be quite sure they would have, sooner or later, to pay the money to the last farthing, and that they had better hoard it until they knew who their landlord should finally by law be declared to be. The glorious uncertainty was exemplified in the progress of this litigation. Before seven judges in the Irish Court of Exchequer Chamber the case was again considered, and a majority reversed the unanimous judgment of the Court of Common Pleas. It was known that an appeal would be made to the House of Lords. Some time afterwards, however, a compromise was come to between Sir Richard and the defendant. Sir George Hamilton Seymour agreed to take four hundred thousand pounds, and allow the larger Hertford estate in Ireland to remain with Sir Richard Wallace. The question turned on the interpretation of a codicil in Sir Richard Wallace's favour. Some lawyers maintain to this day that the Judgment of the Court of Common Pleas was right, and that it should have been upheld. Sir George Hamilton Seymour was, however, not rich; he thought it better to be on the safe side.

While the litigation was proceeding, and for some time afterwards, the management of the Hertford estates had been the subject of unfavourable comment in several of the Ulster newspapers, and especially in the "Northern Whig." Walter T. Stannus, who had been superseded by Mr. Capron, the head of the London firm of Sir Richard Wallace's solicitors, thought that a paragraph and a leading article in that journal reflected upon himself. He brought an action for libel. The trial excited the greatest interest in the North of Ireland, for a plea of justification was entered, which implied that certain allegations of tyrannical conduct were true. The case came before Chief Justice Whiteside and a special jury in Dublin. The trial continued for several days, and through the Christmas holidays. Without in any way wishing to reflect on Chief Justice Whiteside's memory, it may perhaps be permitted to be said that, bred as he was in an extreme Conservative school, and with some very strong Protestant and territorial prejudices, on the bench in political cases he was at least as much an advocate as a judge. Some of the witnesses, however, confident in their statements out of court, lost their self-possession under examination in the box. The judge retorted on them with merciless severity, and he was, of course, upheld in this conduct by the leading counsel for the plaintiff, the late Serjeant Armstrong. The serjeant contended that an agent had a right to use a certain amount of influence for political objects over tenants on a large estate. He was professedly a Liberal, and had sought to obtain the representation of the ancient borough of Carrickfergus as a Liberal. But he now said in court, "Away with sentimentalism on this question between landlords and tenants."

One tenant who stated that he had been induced to sign a document of which he did not approve, was met by the Chief Justice with the statement: "Well, sir, well, you are of sane mind. You have not been in a lunatic asylum, have you?"

This for a time checked the overbearing style of Serjeant Armstrong. He appeared utterly confounded. Nor was this strange. The Bar and a large number of people in court knew that the learned serjeant had himself once been placed under certain restraint.

But this was not the last of Chief Justice Whiteside's not very judicial utterances. The question about the sane mind led to another one from the bench. The timid farmer, who had never been in the box before, said that he was perplexed when he signed the paper, with beside it a threatening notice to quit. "Surely, sir," said the judge, "you knew what you were doing?"

"Oh, yes, my lord," said Mr. Palles. the present Chief Baron, who was one of the counsel for the defendant, "he knew perfectly well what he was doing under a threat of a notice to quit." Loud cheers from the large body of tenant farmers in court greeted this announcement. "Clear the court." shouted the Chief Justice.

The judge's charge to the jury was strongly in favour of the plaintiff. He plainly stated that had it not been that the question was in some degree connected with electioneering matters in Lisburn, he would have been disposed to state that the management of a large estate was a private business and not a subject for public criticism in newspapers.

The jury, after a considerable delay, told the judge that there was no prospect of coming to an agreement. He left them to themselves and went to dinner. On his return he was informed that there was still a disagreement. In answer to a juror he gave a direction to which immediate objection was taken by Mr. Butt, who acted as principal counsel for the defendant. The judge did all he could to obtain a verdict. It would, he said, be much to be regretted if the costs of a new trial should have to be incurred. At last the jury gave way. They returned a verdict; but only for fifty pounds on each of the two counts. This could scarcely be considered a triumph to the gentleman who brought the action. That he was guilty of intentional tyranny was not believed nor even intimated. There is here no attempt, no desire to revive any of the charges which were testified to in the witness-box. It must be confessed, however, that to administer a large Irish estate for an absentee landlord like the Marquis of Hertford, under a system through which the tenants had no legal protection, was trying to the character of any human being.

The first hearing of the Seymour--Wallace case came up in the Assize Court in Belfast, before a special jury, when a verdict was recorded for Seymour. A full report of the proceedings appears in the Belfast Press of August 1st, 1871.

In the Court of Common Pleas, Dublin, before four judges, the judgment on appeal was again in favour of Sir George Hamilton Seymour. A report of the case appeared in the Press, November 18th, 1871.

The case on appeal then came before the Exchequer Court, January 18 and 19. Judgment was delivered February 26, 1872, when three judges gave judgment that the decision of the two previous courts given in favour of Seymour should be affirmed, four judges giving judgment that the decision should be reversed and deciding in favour of Sir Richard Wallace. Arrangement were immediately made for a final appeal to the House of Lords. A few months afterwards, however, an agreement was come to between the parties, Sir Richard Wallace taking over absolutely the Irish estate and paying Sir George Hamilton Seymour £400,000.

Intense excitement prevailed in Lisburn and all over the estate during the litigation. The tenants refused to pay their rents, not knowing who the actual owner might ultimately be. It was arranged, however, in the meantime to pay the rents to Mr. Stannus, the Hertford agent, the money to be lodged in the Bank of Ireland in the names of the two litigants pending the final settlement.

On December 19th, 1872, commenced the extraordinary libel suit heard in Dublin before a special jury -- Walter T. Stannus v. the "Northern Whig." The case continued for eight days. Damages were laid at £10,000 and resulted in a verdict for Mr. Stannus wish damages on two counts of £50 each.

(Next week: Judgment of the Court of Assize, Belfast.)


(This article was originally published in the Lisburn Standard on 5 April 1918 as part of a series which ran in that paper each week for several years. The text along with other extracts can be found on my website Eddies Extracts.)